Aditya Seal has got a furry workout buddy; see picture

Aditya Seal posted a workout video on social media in which he is seen doing weightlifting. He is using a cat as a dumbbell 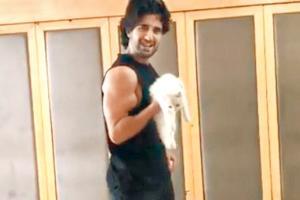 The actor posted a workout video on social media in which he is seen doing weightlifting. He is using a cat as a dumbbell. The actor wrote: "Just another day at the gym [sic]"

Just another day at the gym

It may be his idea of fun - taking potshots at celebrities who grunt at the gym while training. Hopefully, no animal activist is on his list of followers.

Aditya is confident that Student of The Year 2 is going to do well at the box-office. "When you know it's a Dharma Productions film, you expect certain kind of promotion, certain kind of opening at the box-office and songs which connect with the people. You may or may not have big stars in the film, but because its Dharma Productions film, people will still come and watch it so, I don't remember whether I have ever felt nervous while shooting of the film".

The film, produced by Karan Johar through his banner Dharma Productions, is a sequel to the 2012 Student of the Year, which had marked the acting debuts of Alia Bhatt, Varun Dhawan and Sidharth Malhotra. Both Ananya and Tara are excited to be making their debut with Student of the Year 2.

Also Read: Aditya Seal on Tiger Shroff: We have been training gymnastics and martial arts together