Karisma Kapoor shares a photo of herself with her 'mains'

Karisma Kapoor took to Instagram to share a sweet picture of herself with sis Kareena and mum Babita, and fans are in love with the picture! 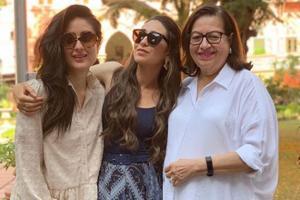 
Karisma Kapoor shares a close bond with sister Kareena Kapoor Khan and mum Babita. The actress recently took to Instagram to share a picture of herself with Kareena and mother Babita, calling them her 'mains'.

Here's what Karisma captioned the photo: "Monday made marvellous with my mains! #family"

Karisma frequently shares pictures of her with Kareena on social media. The sisters tend to go out to events and parties together very often. In fact, they're part of the same girl gang that also includes sisters Malaika Arora and Amrita Arora Ladak.

In the picture above, Karisma Kapoor looks lovely in a navy blue printed dress, while Bebo is radiant in a beige shift dress perfect for the summer. Mum Babita looks pretty in an all-white outfit.

Here are a few pictures of Karisma and Kareena together that the former has shared:

On the work front, Kareena has wrapped up the shoot of Good News with Akshay Kumar, Diljit Dosanjh and Kiara Advani. We also hear that Taimur Ali Khan will be seen doing a 10-minute cameo in Good News.

Kareena will also be seen with Irrfan Khan in Hindi Medium 2. Reports suggest that she will essay the character of a cop in this film, which is a sequel to the 2017 Hindi Medium. Apart from this, the 38-year-old also has Takht, a period drama, in her kitty. Helmed by Karan Johar, this film also stars Ranveer Singh, Alia Bhatt, Vicky Kaushal, Janhvi Kapoor, Bhumi Pednekar and Anil Kapoor.

Also read: Karisma Kapoor wants someone to remix "Tujhe Mirchi Lagi" from her film Coolie No 1

Next Story : Kunal Kemmu's 'biker baby' Inaaya Naumi is too cute to handle