Malaika Arora shared a video where she's doing pilates at Namrata Purohit's studio. The video shows Malaika's flexibility and received comments from many of her friends, including Amrita Arora, Farah Khan, and others 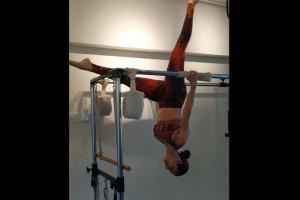 
Malaika Arora is a fitness icon and nobody can deny this fact. The actress keeps sharing pictures of her workout videos on her social media handle and motivates her followers to follow suit. On Wednesday, Malaika Arora shared the video of herself doing pilates, which improves flexibility and the strengthens the core.

The 43-year-old reposted the video from her pilates trainer, Namrata Purohit's Instagram account. Namrata wrote this, "Here's some midweek motivation!! @malaikaaroraofficial performing a version of the walkover!" when she posted Malaika's video.

Also Read: Arjun Kapoor on tying the knot with Malaika Arora: Why would I want to get married when I am bald?

It was Malaika's best friend, Farah Khan Kunder, who commented on the video. Here's what she wrote, "Amazing kam**ni [sic]". However, it was her sister Amrita Arora Ladak, who commented, "Show offffff [sic]"

#malaikasmondaymotivation .... Some #mondaymorningmotivation Yoga is a way of moving into stillness in order to experience the truth of who you are. – Erich Schiffmann Practicing brick yoga regularly at @thedivayoga has not only helped me improve my practice of yoga but continues to empower me to find my balance and fitness. #diva #divayoga @j.patsss @sarvesh_shashi

Isn't this video encouragement for everyone?

A few days ago, an elderly female fan was waiting outside Malaika's yoga studio to meet her, and the latter obliged by taking a picture with her and she also exchanged a few words. Malaika Arora is on an all-time high as international icon Jennifer Lopez and many other renowned names have together invested in an Indian yoga and wellness start-up called SARVA. Talking about it, she told IANS, "I am happy to look beyond and invest in it, becoming a part of the overall company that comes with a vision of connecting seven billion breaths globally, using finesse and a hi-tech approach."

On the Bollywood front, Malaika was last seen in the song "Hello Hello" from the movie Pataakha.