A video doing the rounds on social media has Taimur Ali Khan's nanny, Savitri with Mira Rajput, son Zain Kapoor and Shahid Kapoor. Ever since netizens have been wondering if Mira has hired her for Zain 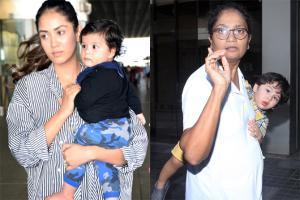 
Mira Rajput was spotted with children Zain Kapoor and Misha Kapoor along with husband Shahid Kapoor at Mumbai airport. Reportedly, the family was heading to Singapore. This was for the first time that the entire family was spotted together by paparazzi. Well, there was something really interesting that caught netizens' eyes. It was Taimur Ali Khan's nanny, Savitri, who was spotted at the airport. While Mira and Shahid were walking together with their kids ahead, the nanny was seen walking behind.

The netizens were quick to spot the lady and guess that she was Taimur Ali Khan's nanny. Reports also suggest that Mira has asked the nanny to maintain a safe distance between them while walking. There were comments pouring about how Mira Rajput and Shahid Kapoor are trying to copy Saif Ali Khan and Kareena Kapoor Khan. Another comment stated that it was for the first time Mira and Shahid were spotted with their kids.

There was another user that spoke in their favour and asked others, 'Why are you all so judgmental?'

On the professional front, Shahid Kapoor's recently released film, Kabir Singh's trailer is breaking the internet. The dialogues have become the talk of the town. Shahid plays as a surgeon, a jilted lover and someone with tremendous anger management issues in Kabir Singh. Kiara Advani plays the character of Preeti, Shahid's love interest in the film. Their chemistry literally sparks a fire onscreen, and their pairing has also been loved by the audience.

Kabir Singh is the remake of the Telugu film, Arjun Reddy, and Shahid Kapoor has left no stone unturned to portray his character in this movie. From the angry man to being an obsessive lover, and later a jilted lover who takes the path of self-destruction, this film is to watch out for.

The film's dialogues are definitely the icing on this cake (read film).