A story with great potential, it could have been better. But watch it anyway because its simplicity is beautiful. 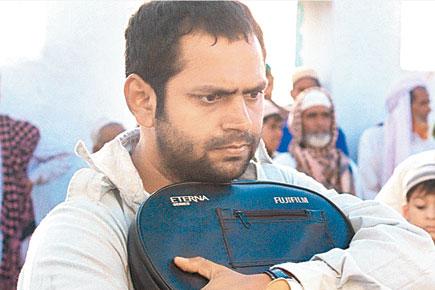 The best thing about Filmistan is its simplicity. Nitin Kakkar's debut film holds plenty of promise, as the story is unique, fresh and yes, simple.

Sunny (Sharib Hashmi) is a below average Bollywood struggler who 'knows' in his head that he will make it big someday. He takes life casually even while trying desperately to get a break as an actor and never losing his sense of humour in the process. Even when Sunny gets rattled for a bit after being kidnapped by Islamic extremists and taken to a border area in Pakistan, his humour is intact as he tries keeping the children of the area entertained with his filmi dialogues and antics. It is here that he meets Aftab (Imanullaq), a peddler of pirated copies of Bollywood films. Soon cinema breaks the ice and Sunny and Innamulhaq end up becoming kindred spirits, even when faced with danger by gun-toting terrorists around.

Kakkar wisely keeps away from any kind of jingoism and sticks to presenting the story in the most matter-of-fact manner without any kind of manipulation. This even when not sacrificing the entertainment value. Sharib Hashmi, as the guileless simple man, does a commendable job. But it is Innamulhaq, who steals your heart with the most natural, endearing performance. Filmistan keeps you hooked throughout but unfortunately by the end of it, the film loses its steam and you get a half-baked, difficult-to-believe climax as a result.

Having said that, Kakkar deserves a round of applause for staying true to the story and thus establishing the fact that a sincere story, told with simplicity, can entertain you as much if not more, in spite of the absence of the mandatory romantic songs or worse still, an item number.

A story with great potential, it could have been better. But watch it anyway because its simplicity is beautiful.

Next Story : How B-Town concerts fare compared to their international counterparts