Box Office: Student Of The Year 2 crosses the 50 crore mark in six days

Tiger Shroff, Ananya Panday and Tara Sutaria's Student Of The Year 2 is doing quite a decent business at the Box Office. On the completion of its sixth day, the Punit Malhotra directorial crossed the 50 crore mark 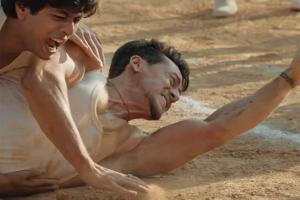 
Student Of The Year 2's box office collections have remained more or less similar in the weekdays. The film, starring Tiger Shroff, Tara Sutaria and Ananya Panday, raked in Rs 4.51 crore on Day 6, taking its total at Rs 53.88 crore.

Student Of The Year 2 has managed to remain stable at the Box Office even on its weekdays, which has helped it to cross the 50 crore mark, before entering its Week 2.

Student Of The Year 2 is likely to wrap up its 1st Week Box Office collection at a cumulative number of around Rs 57 to 58 crore.

Student of The Year 2, directed by Punit Malhotra, was in the news for the longest time for its larger-than-life college campus, two fresh faces, and Tiger Shroff's excellence. The film released on May 10, 2019, and is a sequel to Student of The Year, which was released in 2012. This film marked the debut of Karan Johar's proteges - Alia Bhatt, Varun Dhawan, and Sidharth Malhotra.

Being the debut for Tara and Ananya, Student Of The Year 2 was an important one for the debutants. Both the girls are being lauded for their looks and dance skills in the movie. While Ananya stands out in the film with her acting talent considering her first film, Tara is also being appreciated. Tiger Shroff's action stunts and spunk have also become the talk of the town.