Student Of The Year 2 day 5: The film fails to touch the 50 crore mark

The much-anticipated college flick of the year, Student Of The Year 2, has failed to make a mark at the box office. On day 5, the Tiger Shroff, Ananya Panday, Tara Sutaria-starrer managed to rake in a total of Rs 49.37 crore 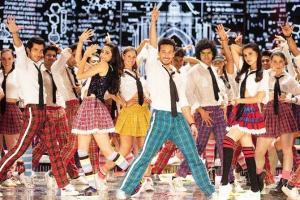 A still from SOTY 2


Tiger Shroff, Ananya Panday and Tara Sutaria-starrer Student Of The Year 2 (SOTY 2) hasn't managed to make a mark at the box office, collecting a total of Rs 49.37 crore on day 5 since the film's release on May 10. The film hasn't been received very well by the critics and audiences alike.

Student of The Year 2, directed by Punit Malhotra, was in the news for the longest time for its larger-than-life college campus, two fresh faces, and Tiger Shroff's excellence. The film released on May 10, 2019, and is a sequel to Student of The Year, which was released in 2012. This film marked the debut of Karan Johar's proteges - Alia Bhatt, Varun Dhawan, and Sidharth Malhotra.

Being the debut for Tara and Ananya, Student Of The Year 2 was an important one for the debutants. Both the girls are being lauded for their looks and dance skills in the movie. While Ananya stands out in the film with her acting talent considering her first film, Tara is also being appreciated. Tiger Shroff's action stunts and spunk have also become the talk of the town.

Talking about the opening the film has received Tiger shares, "We are very grateful for the opening our film has got and are especially to everyone who supported and showered love on our film." The actor also shared about the passion he has for the work he is doing and said, "Nothing can match the impact of the large screen. When you go and watch a film at the theatre, it has a larger-than-life impact. I love cinema and would like to focus on that."

Next Story : Cannes 2019: Kangana nails the saree and opera gloves look with panache