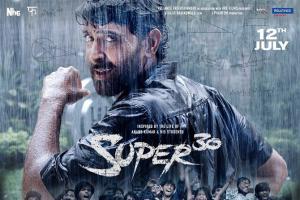 
Hrithik Roshan and Mrunal Thakur-starrer Super 30 is slowly charting its way with massive box office numbers. The film released on July 12, and over the weekend, the numbers seem decent enough. The second day, Saturday, witnessed the Hrithik Roshan-starrer collect Rs 18.19 crore, which is high for a film like Super 30 which is garnering appreciation from all across.

According to Boxofficeindia.com, the film collected a total estimated Rs 50 crore in the first weekend. According to a report in Box Office India, the film has made an estimated Rs 20.5 crore on Sunday. Super 30 opened on Friday with Rs 11.83 crore and went on to show solid growth on Saturday with Rs 18.19 crore.

In fact, it is doing great overseas too! Take a look the tweet by trade expert Taran Adarsh.

Super 30 has been in the news due to its realistic content as it's based on true events. Hrithik Roshan shines as Anand Kumar, a Bihar based mathematician who trains underprivileged kids for IIT-JEE Mains, as he has comfortably got into the skin of the character and given an incredible performance. His depiction of the mathematician has left an impressive mark as it is being deemed as one of the finest performances of his career setting a new benchmark.

Next Story : Here's how Pooja Batra found love in Nawab within 5 months of dating