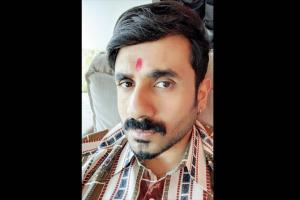 
Almost a year after revealing that he was set to bring forth a dark comedy thriller along with Nikkhil Advani, Vir Das has shared his first look from Hasmukh, with mid-day. Das, who plays the part of a stand-up comedian by the day, and a serial killer at night, sports a rural appearance in the series.

The comedian, who has also penned the series, tells mid-day, "This is a character I have never explored since he is from the hinterlands.

The process of writing it was drastically different too since I hadn't written comedy [content] in Hindi, until now. Hasmukh gave me the opportunity to do something new." The show was shot in UP and Mumbai.

Apart from Hasmukh, which also features Ranvir Shorey, Das is looking to back a series of scripts in different languages under his comedy collective, Weirdass Comedy.

Next Story : Sunny Deol: Can still do more than youngsters