"We are so sad but 'Whiskey Cavalier' will not be coming back to ABC next season," Foley said in the video 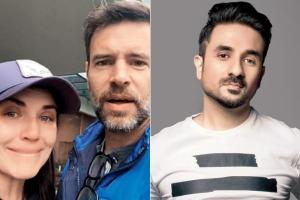 Foley and his wife Marika Dominczyk, who was a recurring guest star on the series, shared a video on Foley's Instagram page confirming the same. Dominczyk was in tears in the emotional video.

"We are so sad but 'Whiskey Cavalier' will not be coming back to ABC next season," Foley said in the video.

"It was a tough call for the network, but ultimately they decided not to go with us. We wish them the best. I want to thank my cast and my crew for being amazing to work with. The experience we've had here in Prague has been wonderful for us and our family. We have made friends that we will keep forever, and I don't know, on to the next. Thank you guys -- for those who watched, thanks for watching."

The show, launched in February, follows the adventures of Will Chase (Foley) and Frankie Trowbridge (Cohan) as they led a team of the FBI and CIA's sharpest minds on a series of missions across the world.

The series was created by David Hemingson, and Ana Ortiz, Tyler James Williams, Vir, and Josh Hopkins also starred in the dramedy.

Vir essayed the role of an agent named Jai Datta in the show, which aired in India on Colors Infinity and streams on Amazon Prime Video.