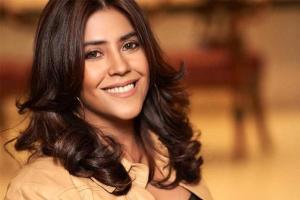 
Should content on digital platforms be regulated? It is the question of the hour. On February 8, 2019, the Delhi High Court had dismissed the petition to censor content from platforms like Netflix, Amazon Prime Video, ALTBalaji, and Hotstar. However, after several PILs (by NGO Justice for Rights) mounting up, the Supreme Court has asked the Centre to look into framing certain guidelines that content providers can adhere to.

While leading Online Curated Content Providers (OCCP) like Netflix, Hotstar, SonyLiv, ALTBalaji, Voot, Arre has imposed a self-regulatory process to censor content, Ekta Kapoor, at the launch of her new telly shows – Kawach Mahashivratri and Bepanah Pyaarr - says that "prohibition will create a bigger want" if content on digital platforms is regulated.

She defends the content on her app and says, "Anything I put out there is open to criticism. One day it's too regressive and on another, the complaint is that there's too much sex. This is a sad situation. The day you curb an audience from a natural need [to watch what they want], it will only create more need."

Kapoor says that sex is not the problem is if the actor playing the role and the viewer watching it has consented to it. "I think sex is a natural need. And people consuming it have given their consent. The person who is acting has consensually agreed to have people watch them and the viewer is watching because he wants to. It is a two-way street. When anything is a one-way street, even in a marriage, it's a crime."

When asked if there is a ruling that creates a censor board for OTT platforms, will she be for or against it? Kapoor says, that she will follow the law. "What can we do if they do decide to monitor content? Who are we to take a stand? They will take a stand and we'll follow, but my beliefs are very clear, I feel any prohibition in societies will cause a bigger need for it. It's human psychology."