'Focus. You can't be everything for everyone'

In a smash-hit session of The Guide Connects, game changers Riyaaz Amlani and Gresham Fernandes spend an afternoon with culinary students for a reality check on what makes you an F&B success story 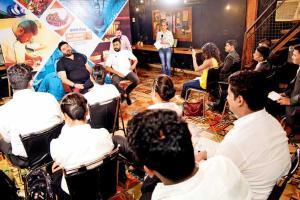 Amlani and Fernandes hold forth on all things F&B. Pics/Shadab Khan


A group of eager catering college students sit facing culinary powerhouses Riyaaz Amlani and Gresham Fernandes. We are at Jude Bakery on Waroda Road in Bandra. The house cat there has been temporarily shifted to the mezzanine floor to facilitate the discussion between experts and debutants, much to its chagrin. But it's all necessary preparation for the second edition of The Guide Connects, a platform for connecting mid-day's young readers with experts from a burgeoning industry, for a session that's part masterclass, part discussion. 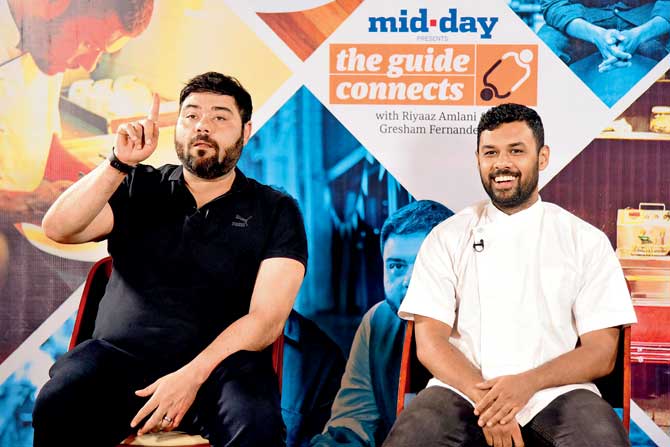 "I'll take that one," Amlani seems to say

The theme this time is making it big in the food and drink industry. Amlani and Fernandes take centre stage before students from the Institute of Hotel Management, Dadar, and Don Bosco College–Hospitality Studies. Amlani is the CEO of hospitality empire Impresario, that, among others, has Salt Water Cafe, Smoke House Deli and Social under its umbrella. With a knack for spotting the next big food trend, he has made it a habit of revolutionising the way we eat and drink. Fernandes, culinary director at the group, is his trusted lieutenant, literally cooking up innovative ideas at this very space, Jude, which stopped being a bakery years ago and now functions as his experimental kitchen. 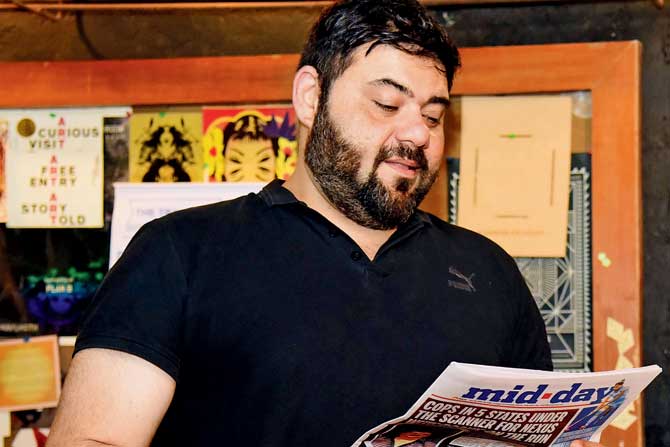 Riyaaz Amlani catches up on news in mid-day

Here, they open up about their experiences in the F&B industry, after which the floor is thrown open for questions. Then it's time for Gresham's tutorial, before everyone exchanges selfies and laughter over bacon and mayo sandwiches and pain au chocolat. And, eventually, the cat gets to roam free in its home again.

On ways to fight attrition in a field riddled with poaching

"We tie them [employees] up," Amlani jokes, before getting serious and saying that the financial returns in hospitality are not always commensurate with the time and effort involved. But, the rewards come in the form of job satisfaction. "The effort that you've put in is paid back almost instantaneously when you walk into a room and see your customers happy," he says, as Fernandes chimes in with his experiences in the kitchen. "People stay back because they are constantly learning and teaching on the job, even after 10 years." 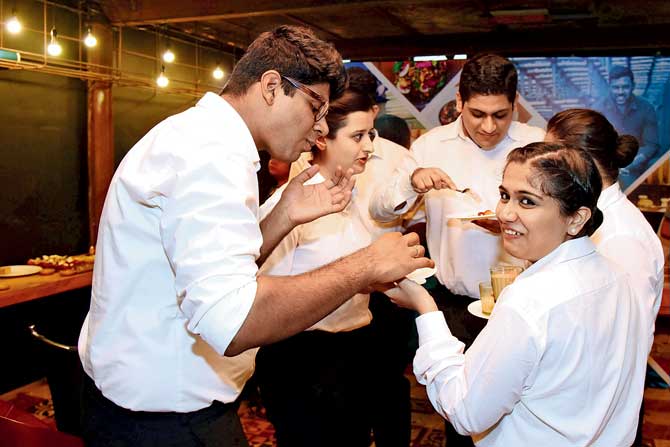 Participants tuck into sandwiches and dessert after the session ends

On Amlani's break in F&B after being a shoe salesman

After putting in seven years in the business of making and selling shoes, Amlani realised that it wasn't his cup of tea. "That was 1997, and one of the things I saw was that Bombay had very few places where people could have a good time and feel engaged with the city," he remembers. So, he became an entertainment consultant. A part of this job involved setting up the city's first bowling alley at High Street Phoenix in Lower Parel.

"When people came to the venue, whether they bowled or not, they definitely had a chai and samosa, or something else to eat. I understood then that food is the fulcrum around which our social life is built. I also realised that I enjoyed setting up the food spaces more than the bumping car tracks or bowling alleys," Amlani says, adding that the seeds for Mocha, Mumbai's first coffee shop, were thus sown, which eventually flowered into the business that he runs today.

On what makes a restaurant survive in this business

One prerequisite is that an establishment has to do what it says on the label, Amlani feels. "If it's a café, it should be a café. If it's a restaurant, it should be a restaurant. And if it's a bar, then that. Today, everybody's trying to be everything. But then you end up being nothing for no one. So, you have to be clear about the mood you are trying to build in your space. And if you successfully attach yourself to a particular mood in the consumer's mind, then every time he is in that mood, he will think of you and visit your restaurant," he explains.

With inputs from Dhara Vora

THE KITCHEN TUTORIAL
Making dashi and nurturing a knife 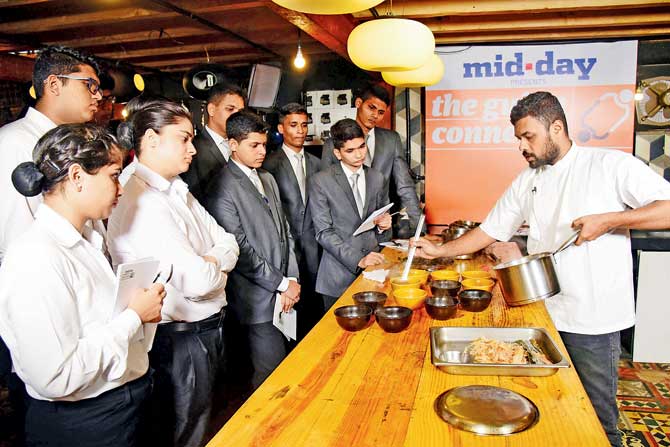 Fernandes serves miso soup, introducing the students to the nuances of umami

Everyone moves to the open kitchen at one end of Jude Bakery for the masterclass. The students gather on one side of a table. Fernandes moves around across them, navigating the workspace — his altar. The lesson for the day is figuring the rudiments of Japanese cuisine. And over half an hour, the youngsters get a crash course in making miso soup, something they had never been exposed to, admittedly.

They understand the subtlety of dashi in the process, a basic fish stock made from fermented tuna and dried seaweed. And Fernandes guides their palate when they try a spoonful each of the finished product, teaching them what it means to recognise umami, "the taste of meat". 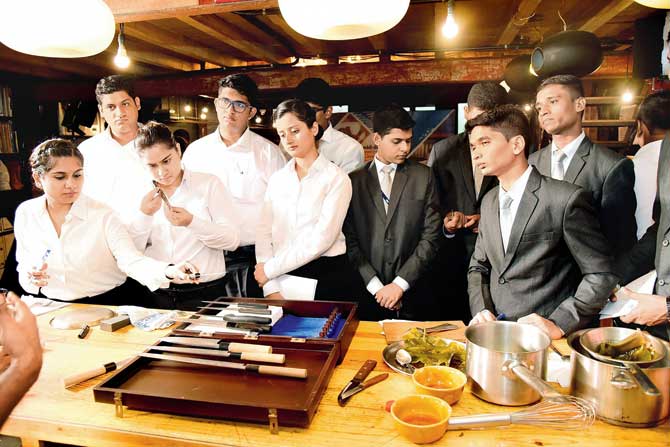 The group inspects the tools of Fernandes' trade

But it's the little nuggets of wisdom that he peppers the session with that are possibly the biggest takeaways from the experience. Travel as much as you can, he says. It will unlock the doors for your tastebuds like nothing else will. So, save money and do it.

"My own education grew when I went to Brazil and realised it has food that tastes exactly like what my grandmother used to make at home," Fernandes reveals. Also, rethink your concept of waste, he tells the students. "The future is all about reducing. 'Can I make a stock from onion peel?' 'What can I do with garlic root?' Ask yourselves these questions," he says, adding that knowing how to build a fire is the most important thing. "Strike two stones if possible. But try starting your own fire and cook a meal on it. It's the humblest thing you'll ever do." 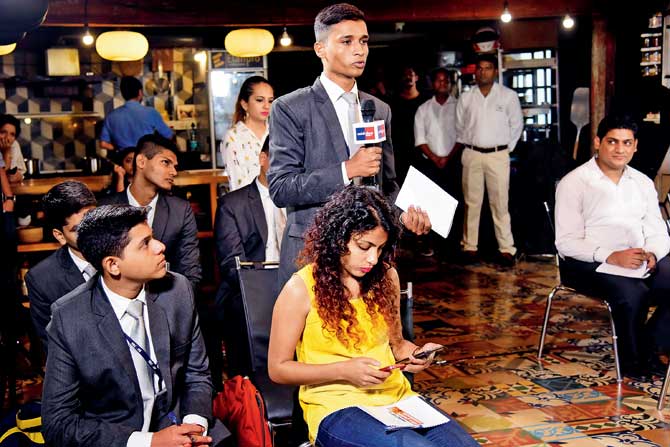 The Q&A session in progress

PARTICIPANTS TURN INTERVIEWERS
'Should traditional dishes be subject to the fusion treatment?' 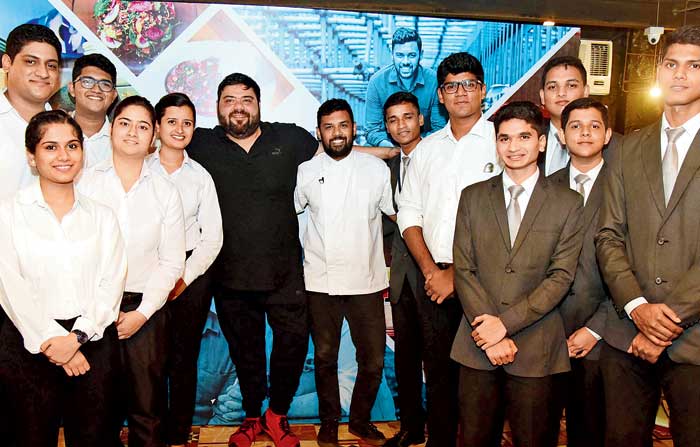 Navsheen Kuchroo: At a time when everyone seems to be trying fusion food, should traditional dishes, like say, rogan josh, also be given the fusion treatment?
Amlani: Things evolve. We are all standing on the shoulders of giants who came before us, and we are building on their work. Somebody must have made the first rogan josh. Somebody must have put the first tikka in the tandoor. Those innovations have now become classics. But just because they have doesn't mean that we can't create new ones. We have so many techniques now at our disposal, so you take your own knowledge and experiences and put them together, and what emerges is uniquely you.
That becomes your story alone. Where did you grow up? Which school did you go to? What friends did you make? Which aunty from Kerala made the first appam for you? All those things are unique only to you. But [before trying anything new], you have to ask yourself, why am I doing this? Agar tum ek phool bana rahe ho sirf garnishing ke liye, then tum [customer ko] fool bana rahe ho.
Leonard Verma: I believe the two of you brought molecular gastronomy to India? What was that like?
Fernandes: See, I started this 10-12 years ago, when I was 24 or 25. You want to keep trying out stuff at that age, you want to do new things. So, it was great, but only to a point. When it gets bastardised, then it becomes wrong. It doesn't make sense when there are three types of foam on the plate. You're just confusing diners. But what you have to understand is that it's still relevant. I mean, making the perfect foam is important. It's intrinsic for instance, to making the perfect cappuccino, right? And that's not new. That's a 200-year-old technique.
Tarveen Kaur: What advice would you give to somebody entering the industry today, when being a chef is made out to be a lot more glamorous than before?
Fernandes: Man, it's been 20 years since I graduated from culinary school! It was a very different scenario back then. The job was a lot more physical. I used to go through a pair of shoes every three months. So, the most important piece of advice I can give you is not culinary advice. It's to buy a good pair of shoes. Take care of your feet. Take care of your back. Buy a knife, and maintain it. And just shut up and listen, because the first five years are the most important for you.

Sharp Advice
The highlight of the masterclass is when Fernandes whips out his box of knives, eliciting responses like "oooh" from a wide-eyed audience. He then gives them a lowdown on the tools of his trade. Here are some key tips:
1) Don't get a substandard knife. Invest in a good one even though it's more expensive.
2) If you are an advanced cook, get two or three different types of knives for veggies, fish and meat.
3) Beginners should be fine with a good double-edged knife.
4) JA Henckels, also called Zwilling knives, are possibly the best brand to invest in. These can last you for eight to 10 years easily.
5) Get two or three different grades of sharpening stones.
6) Don't use a thin knife to cut through bones. You'll chip the blade.
7) Wash your knives in hot soapy water once you're done using them.

Next Story : A hatke cafe