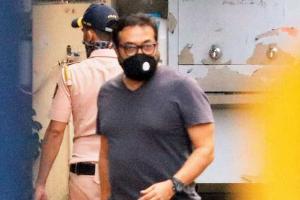 
Filmmaker Anurag Kashyap recorded his detailed statement at Versova police station on Thursday in the rape case registered against him. Sources said he denied all allegations against him during the questioning that went on for eight hours.

Kashyap was summoned a day after the FIR was registered but could not make it then due to personal and professional commitments. He had asked for the statement to be recorded on October 1 at 11 am.

The filmmaker arrived at the police station an hour before the scheduled time. According to police sources, he was questioned for eight hours and denied all allegations. Police will verify his version of the story. If any loopholes or discrepancies are found, he will be summoned again.

Sources also said that since the case is old and has no eyewitnesses, it would be a challenge to crack it. The survivor has mentioned the month and year of the incident but not the date. This is also expected to make the gathering of proof difficult. In addition, accessing call records from 2013 will also be difficult.

Also Read: He pushed me to the sofa and forced himself on me: Actress alleges rape by Anurag Kashyap

The FIR was registered last month under Sections 376 (1) (rape), 354 (assault or criminal force to woman with intent to outrage her modesty), 341 (wrongful restraint) and 342 (wrongful confinement) of the Indian Penal Code by a 31-year-old actress.

Next Story : Not just outbreak, this is forever: Let's Feed Mumbai co-founder