Man who was pulled out of debris overnight, returns to the site in the morning to lend a hand in the ongoing rescue operations 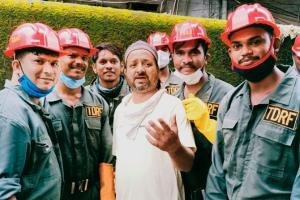 Khalid Abdullah Khan with the rescuers on Tuesday


I had heard of angels but for the first time, I saw them in front of my eyes," said an emotional Khalid Abdullah Khan, who was rescued from under the debris of the Sayyed Jilani building collapse after night hours. Saved on Monday, the 42-year-old rested overnight and joined the rescue efforts on Tuesday as the toll rose to 26.

When I heard the sound, 'koi hai', I was so relieved. I knew my angels had come and I replied to them," Khan had said to the rescuers.

Trapped for nine hours under the debris of the Sayyed Jilani building after the collapse, he lied still waiting and waiting and perspiring since the time of the collapse around 3:30 am. "As time ticked and the day came, I did not give up hope and remained attentive and responded to the rescue call and here I am today, alive. I have no words to thank the rescue team," he said. 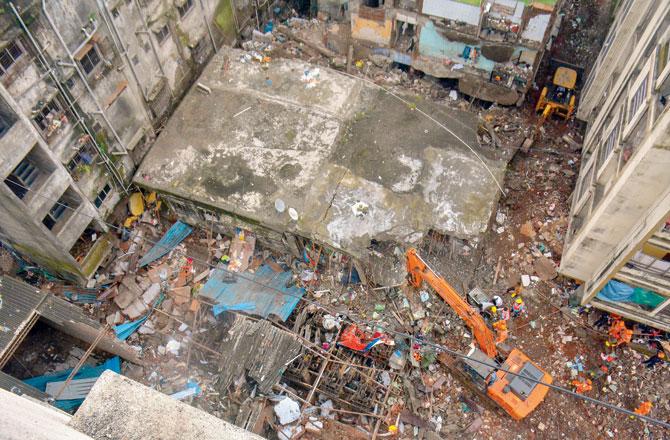 The Thane Disaster Response Force (TDRF) was one of the first rescue teams to reach the collapse site. "As we cleared and sifted through the debris slowly, we kept on calling for anyone who could hear us and then we heard this frail noise coming from under the debris and reached towards it to find Khalidji. We are glad that he is safe and sound," Sachin S Dube, TDRF senior officer said.

Khalid also said that he had a one-litre bottle of water with him. He wanted to save it for a maximum of 48 hours in case he remained trapped though he could hear the sound of constant drilling outside. "The NDRF team was there and I could hear the drilling and cutting. They were cutting the debris and giving it support so that it would not fall on us. As the sound of drilling reached nearer, I was confident that I would be saved. At the first sight of sunlight and rescue teams, I gulped down the remaining litre of water in one go. I salute the NDRF teams for this," Khan said.

By 7.15 pm on Tuesday, as rescue operations of the National Disaster Response Force (NDRF) and the Thane and Bhiwandi disaster cells continued, 25 people, including four children, were rescued. 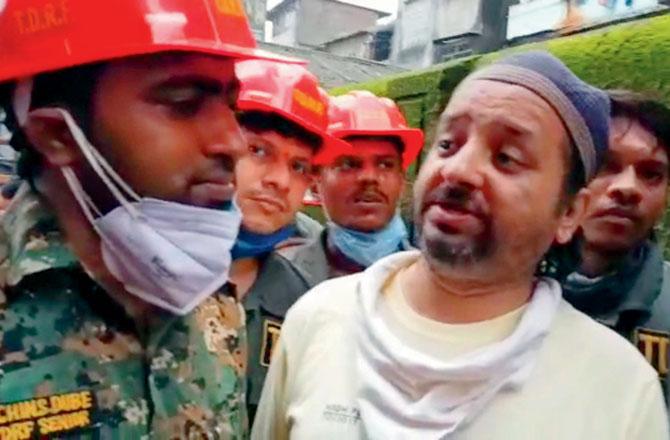 Khalid Abdullah Khan was rescued after spending hours under the debris

At the same time, two more buildings in the jurisdiction of the Bhiwandi-Nizampur City Municipal Corporation (BNCMC) were vacated.

Among the 26 dead are 11 children, with the youngest being a two-and-a-half-year-old boy and the oldest being a 75-year-old resident who probably died sleeping as the building the collapse.

Of those rescued, five were pulled out before the government machinery reached the collapse site. Both the vacated buildings — ground-plus-three structures already listed as dangerous — had 13 listed tenants with 25-30 occupants. They were shifted elsewhere.

Around 62 residents were fear trapped in the rubble of the collapse at the time of Sayyed Jilani building's collapse on Monday. The third floor of the building came crashing down on to the first floor. A team from the local police and one from the Thane Municipal Corporation's Disaster Response Force were among the first ones to reach the spot.

25
No. of people rescued so far from the collapse site

15
Approx. no. of people believed to be still trapped

Next Story : State Traffic violations: People yet to pay Rs 270.52 crore in fines