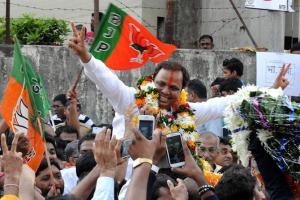 
The counting of votes for the 2019 Maharashtra Assembly Elections are underway. According to the Election Commission, early trends showed the BJP-Shiv Sena alliance in the lead. While the saffron alliance is leading in the state, in Mumbai, minister of school education, sports, and youth welfare of Maharashtra and BJP leader Ashish Shelar is seen taking a huge lead over his rival and Congress leader Asif Zakaria.

Ashish Shelar, who is the sitting MLA from Bandra West constituency and was leading with a margin of 25 thousand votes won the Bandra-West seat by defeating Congress' Asif Zakaria by 26,507 votes. Ashish Shelar has received about 74,816 while his arch-rival and three-time corporator Asif Zakaria received 48309 votes, reports PTI. 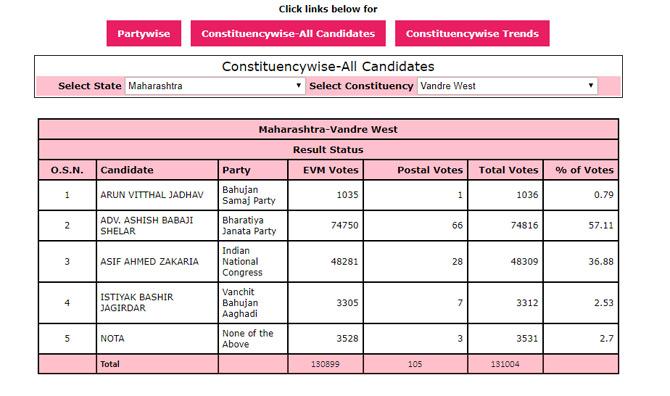 A screengrab of the counting from the Elections Commission official website

The Bandra West constituency, which is one of the most happening suburbs in Mumbai and home to celebrities witnessed a key battle between Senior BJP leader Ashish Shelar and Congress leader Asif Zakaria. The 47-year-old BJP leader, who originally hails from Sindhudurg moved to Bandra with his parents during his younger days.

Shelar took his first step into politics when he joined the BJP. He contested the Brihanmumbai Municipal Corporation (BMC) elections and was elected as a corporator from Khar West ward no 77. Post which, he rose through the ranks and carved a name for himself to become one of the prominent faces of politics in Maharashtra.

He contested the 2009 Assembly Elections against longtime MLA and sitting corporator Baba Siddique but lost the election by a lower margin. But in 2014, he defeated Baba Siddique by a margin of over 20,000 votes.

On the other hand, Zakaria is a three-time Municipal Councillor of Ward no. 101 Bandra (West). His uncle Rafiq Zakaria was a veteran politician of the Congress party, while his brother Arif Zakaria is an actor by profession.

Next Story : Maharashtra Assembly Election Results 2019: NCP will not go with Sena