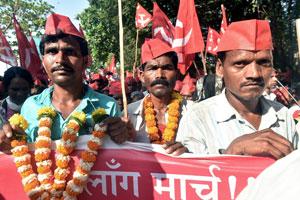 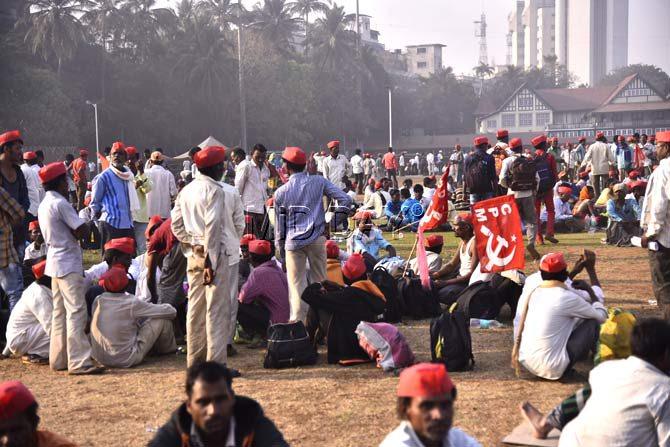 Maharashtra Chief Minister Devendra Fadnavis on Monday said his government was "sensitive and positive" towards the demands of farmers and tribals, who have marched from Nashik to Mumbai to draw the administration's attention towards their problems. Fadnavis was responding to a discussion in the Assembly, initiated by Leader of Opposition Radhakrishna Vikhe Patil, who lauded the farmers participating in the 'Kisan Long March' for their peaceful protest while demanding a complete loan waiver and compensation for hailstorm and pink bollworm pest attack on crops.

For the second time in 10 months, Maharashtra farmers cracked the whip on the government to turn spotlight on the grave agrarian crises gripping the state by completing a long march to the Legislature, in Mumbai on Monday. More than an estimated 35,000 peasants -- men, women, youth and even seniors -- with lines of worry collectively writ on their weary faces, determinedly completed the 180-km long march over six days.

Azad Maidan in south Mumbai turned into a sea of red this morning as thousands of farmers, carrying red flags, converged here after walking around 180 kms under the blazing sun over the last six days. The farmers plan to surround the Assembly complex to press for their demands of an unconditional loan waiver, and transfer of forest land to tribal farmers who have been tilling it for years. They reached Azad Maidan early today, after camping at KJ Somaiya Ground in Sion area. 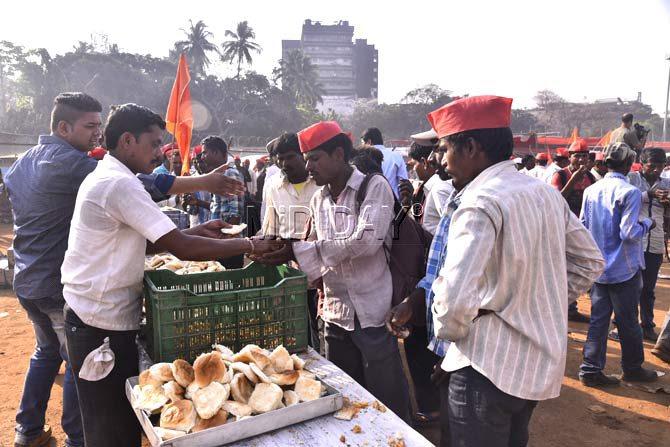 Food being provided to the farmers at Azad Maidan

Organised by the All India Kisan Sabha (AIKS), the farmers wing of Communist Party of India-Marxist, the farmers sporting red caps, red flags, beating drums and cymbals and the tribal blowing instrument --'tarpa', marched in disciplined unity as the Bharatiya Janata Party-Shiv Sena braced itself for the political fallout of the peasant power. In a considerate gesture, the farmers abandoned their night's rest, to march from the Somaiya Grounds, Vidyavihar starting 2 a.m. (Monday) to reach the historic Azad Maidan at dawn, to avoid inconveniencing students appearing for the ongoing board examinations.

The CPI(M)-affiliated All India Kisan Sabha, which is spearheading the farmers' protest, said it will consider what the government has to offer. CPI(M) leader Ashok Dhawle said over 50,000 people have joined the protest. "We will begin our rally after 11 am today so that students appearing for their Class 10 board exam don't face any difficulties," he said. 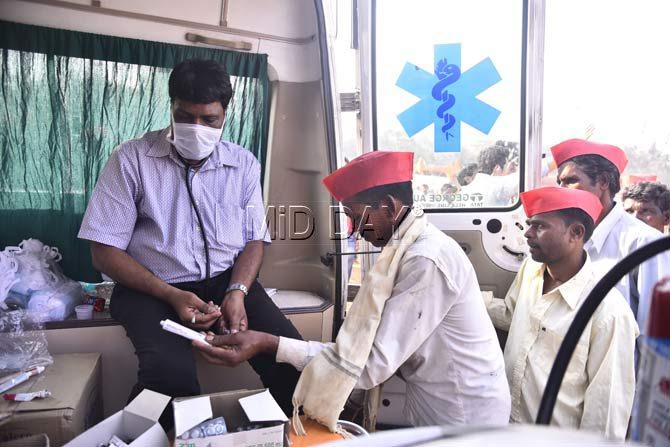 Tribals from Thane district have joined the farmers from Nashik district in the protest. Maharashtra minister Girish Mahajan, who welcomed the march at Mulund in suburban Mumbai yesterday, said the government, which has met earlier demands by farmers, will consider their latest ones. The opposition Congress, NCP, Maharashtra Navnirman Sena and also Shiv Sena, which is part of the BJP-led ruling alliance in the state, have extended support to the farmers' demands.

Wary of the potential ramifications as the farmers prepared to lay 'seige' on the Maharashtra Legislature on Monday afternoon, the state government hurriedly formed a high-powered six-member Ministerial Committee to discuss all issues with the peasants. 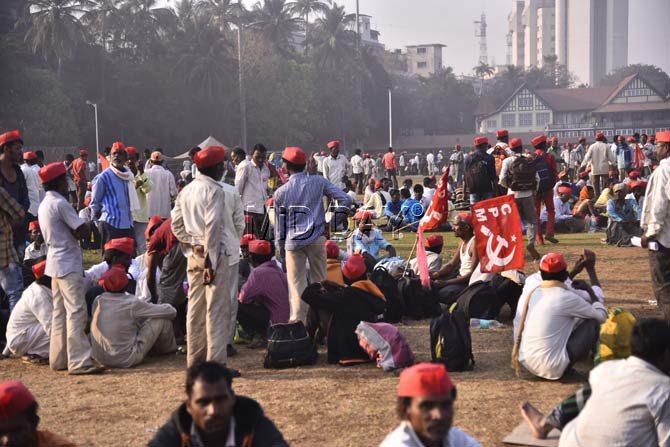 Farmers leader Ajit Nawale said that among the major demands are implementation of the farm loans waiver announced in June 2017, (after farmers in the state went on a 'strike'), then make the farmers completely debt-free, besides other demands. "Considering the tremendous response we have evoked from across the state, the government cannot dismiss us lightly. If it continues to dilly-dally on the farm loans waiver or try to take us for a ride, it will face the consequences," Nawale told reporters late on Sunday.

AIKS Maharashtra President Ashok Dhavale pointed out that the crisis in the farmlands is very severe with "over 400,000 farmers committing suicides in the past 25 years"."Agrarian distress is linked to malnutrition... The farming community is feeling betrayed by the Bharatiya Janata Party-led governments in Maharashtra and at the Centre," Dhavale said. 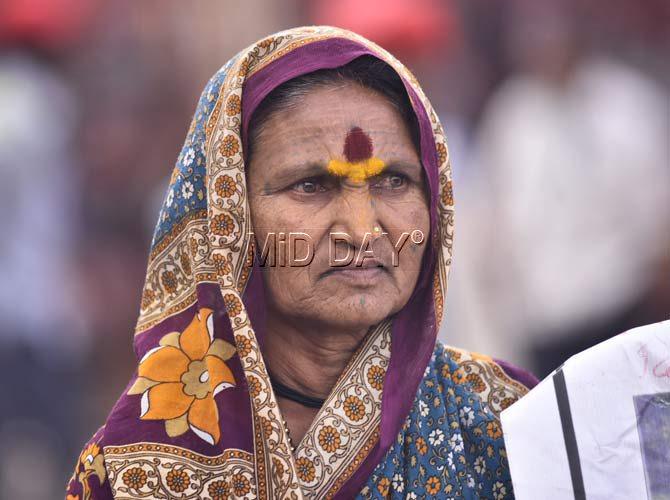 Farmers also want the implementation of the MS Swaminathan Commission report, which says farmers should be paid one-and-a-half times the cost of production and the Minimum Support Price should be fixed keeping this in mind. While there is no likelihood of all farmers being allowed to proceed to the Assembly complex from Azad Maidan, a delegation of farmer leaders will be allowed to meet Chief Minister Devendra Fadnavis. 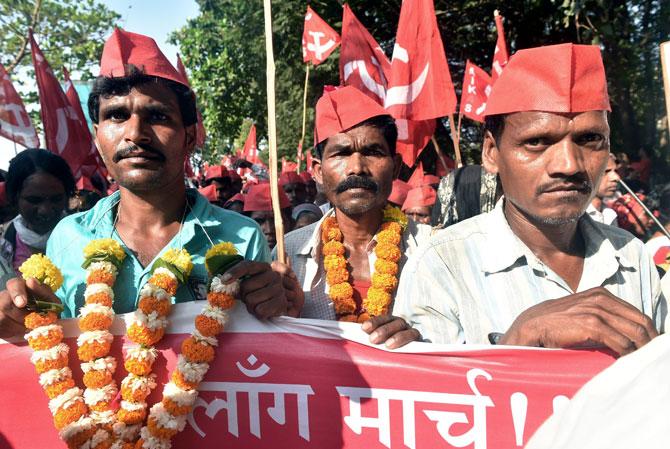 Farmers of All Indian Kisan Sabha (AIKS) march from Nashik to Mumbai to gherao Vidhan Bhawan on March 12, demanding a loan waiver, in Mumbai. Pic/PTI

Many of the marchers, braving the early summer heat, were seen reaching Mumbai with red and swollen eyes, broken or temporarily mended footwear, dusty, torn clothes, having barely managed a square meal or a proper bath during the past week as they started in Nashik on Wednesday.

However, they hoped that justice might be finally done to their cause.

Next Story : Mumbai: No traffic diversions to take place due to Farmers' Morcha'