Mumbai: Bandra-Kurla Complex commuters may finally get a local train

The state has requested the Indian Railways to include the line in the Mumbai Urban Transport Project (MUTP), and a feasibility study is expected. 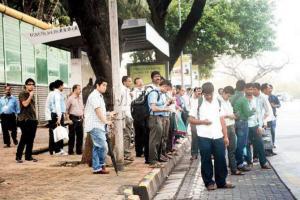 
Will the thousands of office-goers in BKC finally be able to enjoy the convenience of taking a train to work? Mumbai's lifeline — the local train — could soon make its way to the city's business hub, with the state government pushing for a railway line connecting Bandra and Kurla.

The state has requested the Indian Railways to include the line in the Mumbai Urban Transport Project (MUTP), and a feasibility study is expected. There is no word on whether the line will include a station at BKC, although this will be of immense benefit to people working there. Currently, BKC commuters have to rely on buses or shell out on autorickshaws and cabs, as the closest railway stations are at Bandra and Kurla.

The plan had been originally included in Phase 3 of the World Bank-funded MUTP, but in 2011, the MMRDA issued a notification for deletion of the proposed Bandra-Kurla rail link, citing that the Metro 2A and B, or the Charkop-Bandra-Mankhurd Metro link had already been planned to provide east-west connectivity. The Western Railway (WR) had replied stating that the Metro did not have the capacity to accommodate 36,000 commuters. At best, it could act as a complimentary service to the railways.

"Suburban railway cannot be replaced by Metro rail. A local train would enable passengers to travel seamlessly without any interchange. BKC is in the throes of growth, and this is the time to make space for the train, before the booming growth takes over all land here. It is now or never," said activist Anil Galgali, who has been spearheading the campaign for the Bandra-Kurla line.

Galgali accessed the letter (through the RTI Act), in which WR stated that the proposed line is the need of the day, since commuters will only increase along this route.
A senior railway official said the railway board is handling the matter, and the project may be revived, subject to its feasibility.

New AC local as swanky as Train 18
Speaking of the new AC local train headed to Mumbai from the Integral Coach Factory (ICF) in Chennai, ICF General Manager Sudhanshu Mani compared it to the swanky Train 18, the country's first engine-less long distance train. "The new vestibuled local train is far better than the one sent to Mumbai in 2015. It has a wide passage end to end, no equipment on board except the driver's cab at each end, like Train 18, better seats and luggage racks, modern brakes, faster acceleration. It is energy-efficient and has new livery," he stated on social media.