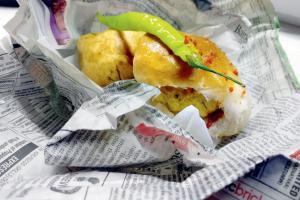 Roadside vendors in the city continue to serve and pack food in newspapers. Pic/Nimesh Dave


An 2016 the Food Safety and Standards Authority of India (FSSAI) had prohibited selling of food wrapped in newspapers as the printing ink is considered to be harmful for consumption, but it seems the Food and Drug Administration Mumbai has failed to implement it in the city with roadside vendors openly flouting the norm. According to the authority, they haven't received a single complaint regarding violation of the circular in the past three years, and hence no action has been taken.

In order to address the issue of printing ink causing serious health hazards including cancer in the long-term, the FSSAI had prohibited selling food wrapped in newspapers in 2016. But the apex regulating body has failed in implementing the regulation in Mumbai. Also, FDA has failed to take action against such activity even though it's a very common practice among food vendors.

Also Read: Banned stapler pins on your tea bags? FDA is waiting for your complaint

Requesting anonymity, a senior officer of the FDA's food department said, "We have held a number of awareness programmes among street vendors across the city. We haven’t received any such complaint from people. But if we do, then action will certainly be taken."

The advisory issued by FSSAI says, "Newspapers are widely used as an absorbent material in small hotels, by vendors, and in homes. But the printing ink contains multiple bioactive materials (including harmful colours, pigments, binders, additives, and preservatives), which can have negative health effects. Newspapers should not be used to wrap food or absorb excess oil from fried food. There is an urgent need to discourage the use of newspapers as food packaging material by creating awareness amongst vendors, especially in the unorganised sector."

Also Read: No product will be 'fresh', 'pure' or 'natural' without permission

The circular was sent to all states for implementation. But due to lack of awareness, even customers don’t know how this habit can lead to serious health issues.

In a recent study conducted by the FSSAI in collaboration with the Indian Institute of Packaging, Mumbai and National Test House, Kolkata, presence of heavy metals was found in food wrapped in newspapers or served in plates made from it. As many as 380 food samples were collected from the unorganised sector and 13.4 percent of them were found to be contaminated.