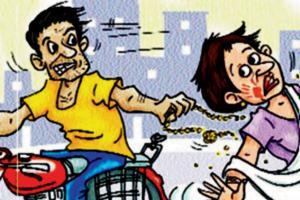 
An RTI response to a query regarding chain-snatching cases in the city has revealed that even though the number of cases has gone down by 93 percent over the past six years, the rate of recovery still stands at a mere 30 percent.

Mumbai Police's continuous patrolling, nakabandi and action against traffic violators have helped to bring down the rate of the crime but it seems not much is being done to recover the stolen ornaments. While the year 2013 reported 2,090 such cases, last year saw a drop to 171 cases.

The reply to the RTI query filed by activist Shakeel Ahmed further reveals that chain-snatching cases in the city have been treated with utmost priority with zonal DCPs immediately reaching spots soon after incidents are reported in their jurisdiction. It also says that these steps helped in curbing the number of cases.

According to the RTI reply, around 5,193 chain-snatching cases have been reported since 2013, out of which only 2,338 cases have been solved. The total value of the gold stolen stands at R35.15 crore, while only 30 percent of it (Rs 7.12 crore) has been recovered.

Speaking to mid-day, Mumbai Police spokesperson Manjunath Singe said, "We have been seriously working on tackling chain-snatching cases. Anti-chain-snatching measures at local police stations help to prevent such incidents. We will continue to put in our best efforts in curbing the crime."