The Sakinaka resident, who made Mumbai and the nation proud with her win in Kolkata on July 29, was never short on talent. 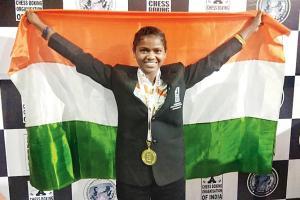 Madhavi at the event


For the second year running, Madhavi Gonbare, 22, has won the gold medal in the World Amateur Chess Boxing Competition, thanks to the support of a good cop.

The Sakinaka resident, who made Mumbai and the nation proud with her win in Kolkata on July 29, was never short on talent. But as the daughter of a widow who works as a school peon, finances were tight. mid-day had reported last year, it was Avinash Dharmadhikari — then a senior inspector at the Sakinaka police station — who helped her with the R30,000 participation fees for the competition.

Dharmadhikari was later promoted to assistant commissioner of police (ACP) in Dongri. Despite his new posting though, Dharmadhikari did not forget Gonbare. When the time came for her to enter the contest again this year, he stepped up and raised the participation fees through donors a second time.

ACP Dharmadhikari said, "I am very happy that she won the gold medal in the World Amateur Chess Boxing Competition, in which more than 100 competitors participated from Russia, Finland, USA, Germany and other countries."

Basking in the golden glow of her medal, Madhavi told mid-day, "I am very happy. The entire credit goes to Dharmadhikari sir, who helped me. That is how I won gold medals two years in a row."

What is chess boxing?
Chess boxing is a hybrid fighting sport that combines two traditional pastimes: chess, a cerebral board game, and boxing, a physical sport. The competitors fight in alternating rounds of chess and boxing.