The Minton tiles, which were part and parcel of iconic 19th-century buildings across the world, will now be restored in all their former glory 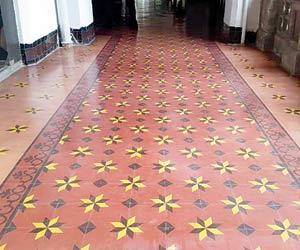 The ongoing restoration of the Chhatrapati Shivaji Maharaj Terminus (CSMT) has helped unearth some unlikely treasures. Over the weekend, railway engineers found two 1,000-sqft rooms full of undisturbed original patterned tile flooring, which was hidden under the cement tiles that had been laid over it. 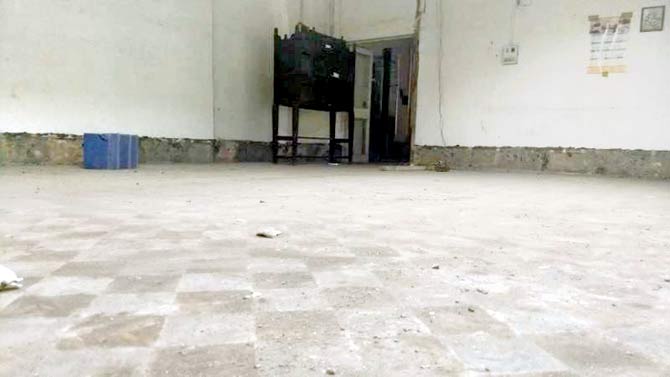 One of the 1,000-sqft rooms where the tiles were found

The iconic building is known to have a mix of Minton encaustic tiles and blue basalt patterned floorings, which were a matter pride in the nineteenth century. The tile patterns were an important feature of all iconic public buildings not only in England but also across the world, including the United States Capitol. 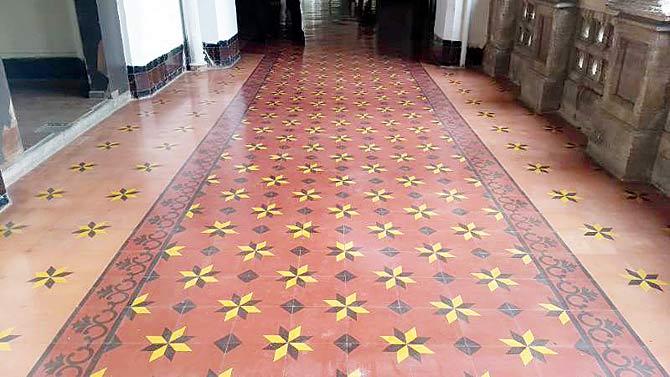 Once they are restored, the flooring will look something like this

A railway engineer working on the project said, "CSMT, which is a UNESCO world heritage site building is being completely restored and as a part of that process, the old offices and artificial alterations done to the building are being dismantled. When we removed the layer of cement tile floorings, we uncovered the original tile work that is intact and now plan to restore it. We will get conservation architects to work on it."

"While the corridors have similar Minton tiles, the inside rooms also have similar patterns, which are in the process of being cleaned up now. One can see a mix of blue and red tiles and a few others that are white," he added.

One by one
"The floor in one of the rooms has black and white squares and the other has reddish-yellow and blue Minton patterned tiling, which is now covered under dust and rubble. It was once a key feature of this building. The two rooms of about 1,000 sq ft each were the cash office of CR with a maze of tables and chairs, cabins, and false ceiling," said an official.

"The corridors and rooms are being restored one by one and are being stripped of all the artificial touches. We are turning the building into its original form. Once restored, we can walk through the corridors and the breeze will flow as it used to without any hurdles," he added.

Central Railway's chief public relations officer Sunil Udasi confirmed that the railways intended to restore all types of original tile patterns found at the railway cash offices. He also said that the corridors would be free of all clutter.

Washing tiles
Railway officials said that the flooring would now be washed to make the entire tiling pattern properly visible. "Once this is done, we shall call conservation experts so that they can examine and identify them and give their opinion. But in all cases, we intend to restore them to their original form," said the engineer.

"The first step should be to clean and restore them to their original glory. If it is not possible to restore them, an attempt should be made to get to the closest replica," said conservation architect Vikas Dilawari.

Designed by Fredrick William Stevens, the heritage building for the Great Indian Peninsula Railway's (now Central Railway) head office was constructed meticulously for 10 years between 1878 and 1888, with Indian contractors, workers and students from the JJ School of Art.

Next Story : Mumbaikars, celebrate this Diwali in Kamathipura and make a difference