Counsel for Dr Payal Tadvi's family claims her death has been passed off as suicide; demands 14-day police custody of accused 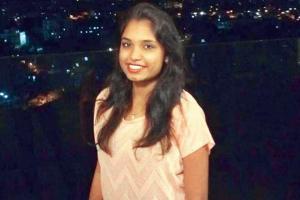 
The three accused in Dr Payal Tadvi's suicide case — Hema Ahuja, Ankita Khandelwal and Bhakti Mehare — were sent to police custody for two days by the Sessions Court on Wednesday.

Advocate Nitin Satpute, counsel for the Tadvi family, has claimed that there were bruises on Payal's back, and has called this an attempt to cover up a murder by showing it as a suicide. Lawyer for the accused, Abad Ponda, rejected the claim saying the room in which Payal had committed suicide had been bolted from the inside. The court has remanded the accused in police custody till May 31.

Mehare was arrested on Tuesday afternoon from the Sessions court premises. Ahuja was arrested from near Andheri Railway station East and Khandelwal from Hinjewadi, Pune. All three accused were produced at the Sessions Court on Wednesday. Satpute submitted in court that Dr Payal had been subjected to torture by three seniors on the basis of her caste. He also claimed that many students in the hospital who were Scheduled Caste and Scheduled Tribe students were subjected to this kind of torture.

He told the court that when the police reached the spot, Payal's body was already been moved to the emergency room. Also, that the body had a red patch on the left shoulder, which raises the possibility that she could have been strangulated and then hanged from the ceiling. To investigate the matter in depth, Satpute has demanded police custody of the three accused for 14 days.

Ponda read out WhatsApp chats from group 'Reminders' that the doctors at Nair were a part of. "All the chats are related to work. As seniors, they felt Dr Payal's work was not up to the mark. There isn't any caste angle to it. The cops have all the chats and have spoken to eye-witnesses for the past 4 to 5 days but haven't found a single piece of evidence apart from allegations of casteist barbs," he said. He also produced a chat between Payal and her mother in which Payal has said the issue was not related to caste.

Demand for another mortem

Advocate Nitin Satpute said, "The post-mortem was done by the junior-most doctors at JJ Hospital. Guideline were not followed by the doctors, and associates professors or professor and civil surgeon were not part of the post-mortem. At whose behest was this panel selected? The post-mortem will have to be performed again to reveal more facts about the death."

Next Story : Mumbai: Doctor in the dock for burning woman's face in Dahisar