A woman who was addicted to pulling out and eating her own hair was operated on at Rajawadi hospital in Ghatkopar, where doctors removed a giant hairball weighing 750 g from her stomach 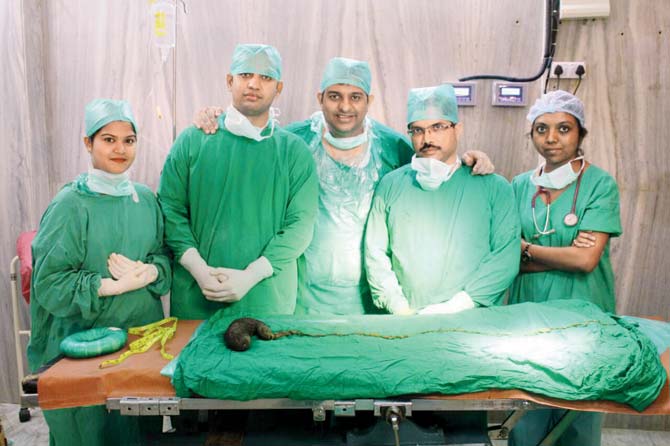 A woman who was addicted to pulling out and eating her own hair was operated on at Rajawadi hospital in Ghatkopar, where doctors removed a giant hairball weighing 750 g from her stomach. 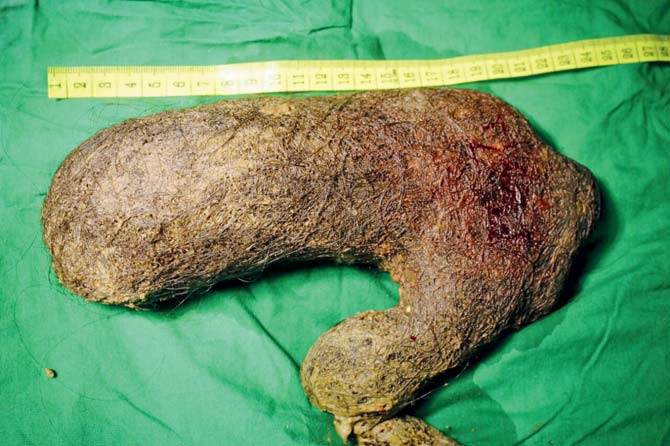 Because of the size of the hairball, doctors suspect that the patient had been eating her hair for years

Archana Tambe (name changed), 20, was brought to the hospital a week ago, suffering from nausea and an extremely swollen abdomen, despite experiencing drastic weight loss in the last few months. She weighed a mere 30 kg at the time of hospitalisation. She was very pale and had lost all appetite, vomiting anything she consumed.

Recovering in the female ward of the hospital, Archana said, "I am fine now, I had a lump in my stomach."

Her mother was shocked to see the hairball and thanked the doctors for saving her life.

She was found to be suffering from the rare Rapunzel Syndrome, which has only ever been documented 88 times in medical literature the world over (as of October 2016).

Tangled
The doctors ordered a CT scan and spotted a huge mass entangled in the stomach. Dr Bharat Kamath, assistant professor in the department of surgery at Rajawadi Hospital, who led the surgical team, said, "It had filled her stomach, due to which the patient was unable to eat. Moreover, a tail of hair trailed into her intestine, which is typical in a case of Rapunzel Syndrome," said Dr Bharat.

This "tail" alone was 103 cm long, extending well into the small intestines. The hairball itself was 25 cm long and about 10-12 cm across. This led the doctors to believe that Archana had been eating her hair for years. This compulsive eating of hair is called Trichophagia, which is associated with trichotillomania (hair pulling). Hair protein does not get digested, nor can the body pass it in stool.

According to Dr Vidya Thakur, medical superintendent of the hospital, this is among the rarest of rare cases. Dr Bharat agreed: "Most surgeons might not have come across such a case. This is my second such case, and the mass of hair is much bigger this time." The doctors will submit their findings to international journals, he added.

Hair-raising risks
The biggest challenge was preparing Archana for the surgery. She had to be given three units of blood to increase her haemoglobin count. "We had to ensure that the lining of the stomach was not impacted during removal of the mass, as it might cause extensive bleeding. Luckily, there were no complications," said Dr Bharat.

Going without the surgery would have been more risky though. "Had the mass been ignored, the mass could have made a hole in the stomach wall, which would cause leakage. This could be life threatening for the patient," he added. She will initially be on a liquid diet and be switched to solid food later. Complete recovery may take a few months. Archana is also under the care of the psychiatry department.

Next Story : Mumbai: Mulund and Deonar dumping grounds will not shut, just yet