The hostel of the accused is far away from Dr Payal Tadvi's hostel and their presence at her room is still a mystery, highly placed sources told mid-day 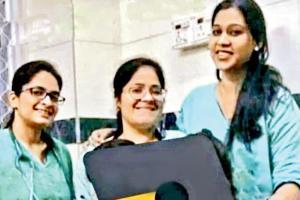 
The police investigatin the Dr Payal Tadvi suicide case at a Nair hospital have said that the three accused — Bhakti Mehare, Hema Ahuha and Ankita Khandelwal — were somehow the first to reach the room where Dr Payal had killed herself. CCTV footage installed at the basement of the hostel has captured images of accused taking her to the emergency room. The hostel of the accused is far away from Dr Payal's hostel and their presence at her room is still a mystery, highly placed sources told mid-day.

Another aspect that has come to light is that the cops sealed the room only seven hours after the incident. Dr Payal had allegedly killed herself at BYL Nair Hospital/Topiwala National Medical College on the evening of May 22. According to the cops, Dr Payal committed suicide between 7 and 7.30pm, but was noticed only around 8 pm. "Payal had put a stool on her bed and hanged herself from the ceiling fan with an dupatta. Payal was wearing a white top and black leggings," a source said.

According to highly-placed sources, Bhakti, Ankita and Hema were the first ones to reach the room. "I don't know who called them but they were at the room when the suicide was discovered. After failed attempts to resuscitate her, they took Payal through the lift to the emergency room, which is around 200 metres from the hostel building," a source said.

Cops were informed around 9pm when she was declared dead by the doctors at the emergency room. A photographer was called to take pictures of the body as well as the room in which Dr Payal had committed suicide. The room was sealed by the cops around 2am, seven hours after the panchnama. "We need to check CCTV footage of the hospital to establish the sequence of events. Firstly, we are focusing on the statements of all the people concerned," an official told mid-day on condition of anonymity.

One accused tried to flee

Sources said during investigation it was found that Ankita had booked a flight ticket to Indore after the incident. She had booked an air ticket from Pune to Indore on Tuesday evening, which she cancelled and booked again on Wednesday evening as her anticipatory bail application was set for hearing.

Next Story : 'The Coastal Road is not only about South Mumbai'