Mumbai to receive moderate spells of rainfall till July 21

No heavy rains for the next 2 weeks, say experts; city will see a rise in temperature 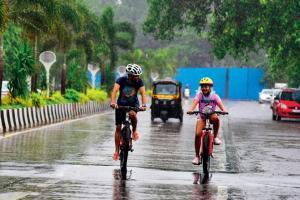 A father and daughter on Carter Road on Saturday. Pic/Shadab Khan


Having seen incessant rainfall over the past week, the city is expected to see some much-needed sunshine this week, primarily due to reduced rainfall. This will also lead to a rise in the overall temperature, thereby inconveniencing Mumbaikars.

Over the past 24 hours, Santa Cruz recorded 54 mm of rainfall, whereas Colaba recorded 31 mm. According to Mahesh Palwat, vice president of Meteorology and Climate Change at Skymet Weather, although isolated pockets of Mumbai recorded heavy thundershowers over the last 24 hours, the overall rain intensity had decreased. "The offshore trough, which was extending from North Konkan and Goa towards Kerala, has weakened," he said. "The East-West shear zone has also moved towards the north. Therefore, we expect moderate showers to continue over some parts of Mumbai for the next two to three days. Thereafter, the rain intensity will go down further and there may be isolated light rainfall, leading to a gradual rise in temperature, along with increased sunshine, leading to sultry weather conditions once again. However, we do not expect Mumbai to go completely dry, but yes, discomfort levels will rise," he added.

Palawat also said that there will be one or two "moderate spells" of rainfall till July 21, after which, heavy rainfall is not expected for another eight to 10 days. "No kind of heavy downpour is expected to make a comeback for some time now, unless the monsoon activates or a weather system develops over the northeastern Arabian Sea. There might be rainfall with reduced intensity in some pockets of the city. It won't lead to any kind of water logging or day-to-day civic disturbances."

Speaking about the expected rise in temperature and the discomfort bound to accompany it, he said that the average temperature this past week was bordering 29 degree celsius, but it will rise to somewhere between 30 and 32 degree celsius. "Over the past week, the rainfall was seen to be moderate to heavy, which kept the temperature down and the weather pleasant in the city.

However, once the rainfall activity reduces, the sun will be seen shining amid mildly cloudy weather."

Next Story : 'Since COVID, biowaste has increased by 300 per cent'