Mumbai: Self-redevelopment 'only solution but 'not foolproof'

The real estate slump, housing experts say, leaves societies with the only option of redeveloping their properties themselves, which too is still in an experimental stage 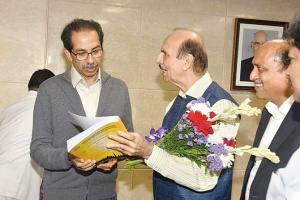 Chief Minister Uddhav Thackeray with Subash Lalla and Ramesh Prabhu at the book launch held last week at Mantralaya, as Minister of Water Resources Jayant Patil (in white) looks on


With the real estate market facing a slowdown, housing experts believe that self-redevelopment could be the only way forward. Over 3,000 redevelopment projects have come to a halt in the city and MMR region in the past few years.

Chief Minister Uddhav Thackeray too had expressed his concern over these stalled projects while launching the book 'Compendium of Self Re-Development for Cooperative Housing Societies' authored by former bureaucrat Subhash Lalla and Ramesh Prabhu, founder of MahaSEWA.

"Barely one or two self-redeveloped projects have seen completion in the last few years and a few more are in the pipeline. The CM has now shown a keen interest in self-redevelopment which," Prabhu said, "could give it momentum provided the state government adheres to the 20-point benefits that the previous BJP-Sena government had announced a month before the elections (September 2019) to housing societies opting for it."

"It is very important to understand the challenges and the risks associated with redevelopment rather than concentrating on the benefits of extra area and corpus alone," MahaRERA chief Gautam Chatterjee observed in the foreword of the book.

"Developers/ builders are charged 18 per cent GST by the government and when the flats are sold, an additional five per cent is levied, without giving any GST input tax credit.

Huge premium is charged on developers/builders by the civic authority, ready-reckoner rates are increased by 10 per cent every year," Prabhu explained.

'Be extra vigilant'
Advocate Vinod Sampat, a senior property lawyer, however, has a word of caution for societies opting for self-redevelopment. "There are often allegations and counter-allegations among committee members and residents during redevelopment discussions. Committee members must be held accountable by residents so they do not misuse their position. Since self-redevelopment is a new baby, it requires careful experimentation and evaluation before knowing the pros and cons completely," he pointed.

Banks, he said, in a bid to park their funds, are supporting self-redevelopment projects but there are other issues like getting 100 per cent consent from all society members, issues of flats being registered in the names of elderly, family disputes etc. "Issues like the demise of flat owner can also create legal complications too. So whether or not self-redevelopment will be successful or not is yet to be seen," Sampat cautions, while asking societies to not trust management consultants and contractors blindly and following proper documentation.

Next Story : Another fake promise? Illuminati owner now says will pay in February