Parties had fallen out just ahead of the 2014 Assembly polls; Sena now hopes to share CM's term 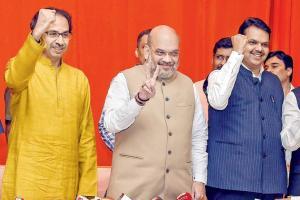 The Shiv Sena and BJP had forged an alliance before the Lok Sabha polls on February 19. FILE PIC


Months before the state Assembly polls, alliance partners Shiv Sena and Bharatiya Janata Party have begun bickering over sharing the Chief Minister’s tenure and the seats that each would contest in the elections this year.

Some BJP leaders have said that it would be a BJP CM without any sharing of tenure since no such agreement had been reached between the parties that had forged an alliance ahead of the Lok Sabha polls and had decided to keep those ties intact in the Assembly polls as well. In 2014, the two parties had fought the Assembly polls independently following disagreement over seat-sharing.

However, members of the Sena said that apart from sharing Assembly seats equally in the October polls, the Sena had been promised that the two partners would share the CM's tenure of five years, with each getting two and a half years each in the high office.

Sources said that they had foreseen a crisis unfolding – just like in 2014 when the two parties bid goodbye to each other just ahead of the Assembly polls. The leaders insist that the CM should be from the BJP and not Sena in any case. They feel that the Sena is second to the BJP in all aspects and it shouldn’t be allowed any leverage that would harm BJP’s dream run in the state.

Sources said former BJP president Amit Shah has told party men that they would have a BJP member as CM, and incumbent Devendra Fadnavis is being projected as the party's CM candidate for the next term as well. Fadnavis hasn’t gone on record over this yet.

In an official statement on Monday, finance minister Sudhir Mungntiwar said, "The next CM will be from the BJP. There is no discontent in the BJP-Shiv Sena alliance over this. We will win more than 220 Assembly seats."

Mungantiwar said Fadnavis had declared on February 19 (the day alliance for Lok Sabha was finalised) that both the parties would share responsibilities and the seats.

Revenue minister Chandrakant Patil had last week said that the BJP and Sena will contest 135 seats each and leave the remaining 18 for their allies.

A firm statement that confronted the BJP came from a Sena youth leader Varun Sardesai, who is Youth Sena president Aaditya Thackeray’s cousin. Sardesai twitted last night that the people who were part of negotiations between Sena president Uddhav Thackeray and BJP president Amit Shah shouldn’t spoil the alliance for their personal gains. “Shiv Sena prez Uddhavsaheb and BJP prez Amit ji have decided that Maha CM post will be 2.5 years each,” he said in his tweet, in an apparent snub to Mungantiwar, who has been in the reckoning for CM’s post.

Considering his proximity with Sena’s first family, Sardesai seems to have approval of the top leadership for taking on BJP. The youth leader is also pursuing Aaditya to take up electoral politics in the Assembly polls. If Aaditya agrees, he would be the first in the Thackeray family to contest a poll for electing lawmakers. He would contest from a tailor-made segment and win as well, putting himself in the contention for the CM’s post. Sources said Aaditya might even give a shot at Deputy CM’s post if the BJP gets first the CM’s post in rotation and hands CM’s office to Sena for the remaining term.

Apparently, Aaditya has been working on a suitable Assembly constituency in Mumbai. On Monday, he convened a meeting of youth works of Worli and Mahim, the two Sena strongholds. He told them that his father would decide on his Assembly election candidature in consultation with party’s senior leaders.

The senior leaders, including the sitting MLAs from Mahim and Worli, who his father should be conferring with, was also in the meeting. Senior minister and Sena ideologue Subhas Desai was present to support the party chief’s son too.

Unconfirmed reports said that CM Devendra Fadnavis would expand and reshuffle his cabinet on June 14. The exercise has been long-awaited for many in the BJP and Sena, and if successful, it would give about 80 days for them to serve before the model code of conduct is imposed. BJP is expected to induct six ministers and Sena one. State finance minister Mungantiwar did not confirm nor denied the possibility. “You will get a message from the publicity and information department once the time and date are confirmed (for swearing-in ceremony),” he said.

145
No. of seats required for majority in the Assembly