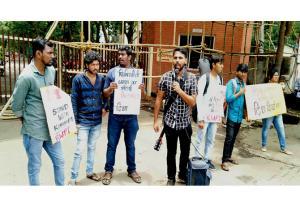 
Members of the Disha Students’ Organisation staged a protest at the Mumbai University (MU) Kalina campus gate against a talk — Zionism and Hindutva — which was held at the Convocation Hall. The protesting students claimed that allowing such an event on the campus revealed the varsity’s pro-saffronisation approach. However, MU authorities rubbished the allegations saying that they were not associated with the programme in any way and had just rented out the hall for it.

Indo-Israel Friendship Association along with the Consulate General of Israel held the event at the campus on Monday evening. The memorandum submitted by the organisation, which demanded cancellation of the programme, stated, "Mumbai University is organising a seminar on 'Zionism and Hindutva' on August 26. This could be seen as a continuation of the process of saffronisation of the education system." President of the organisation, Baban Thoke, an M. Phil student at MU, said, "Saffronisation of education is happening all over the country."

Establishing a connection between his reasoning and V D Sawarkar’s statue at Delhi University, he added, "Savarkar placed the stepping stone to Hindutva philosophy. And because of this philosophy mob lynching is happening across the country leading to communal tension. Even in Israel, Theodor Herzl introduced the philosophy of Zionism. Because of this Israel managed to capture the land of Arabs and continues to subjugate the people of Palestine even today. Such seminars are just strengthening this ideology. We need to stand against them."

When contacted, MU Registrar, Ajay Deshmukh, said, "These allegations are completely baseless. Neither did the university organise the programme nor is it associated with it in any way. As a usual practice, the Convocation Hall was rented out to a third party for the event. There was absolutely no reason for the students to protest against it and question the varsity’s intentions."