Fishermen to get kits to measure dead rare fish 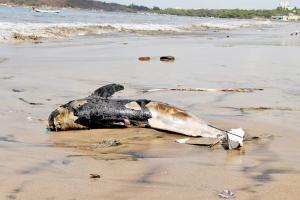 The kits will help maintain data of dead marine creatures, like this porpoise, that have been increasingly washing ashore


Upon seeing an increase in the number of incidents of dead marine creatures washing ashore, the Mangroves Cell has plans to provide morphometry kits to fishermen so that they can measure the external shape of the animals before they are buried. This practice would prove helpful in collecting and maintaining valuable data on the marine animals.

Confirming the same, range forest officer from the Mangroves Cell, Prashant Deshmukh said, "There has been an increase in incidents of dead marine creatures washing ashore and it is important to find out the reason behind their deaths, which is why we need to collect data. Usually, people who come across carcasses of marine creatures bury them in the sand. However, it is important to get information on the creatures. Mangroves cell plans on interacting with fishermen and other important stakeholders who are the first ones to reach the spot. We have planned on providing them with morphometry kits with which they can collect crucial data."

After visiting the villages where fishermen reside, the cell will zero down on the key respondents, who will be given the kits. They will also act as a point of contact for the cell and marine respondents working for the conservation of aquatic species.