Win Rs 10,000 if you find truck that dumped this debris in south Mumbai

The huge pile was allegedly dumped from a private truck, causing traffic chaos on Lala Lajpatrai Road; citizens who provide accurate information about this to the BMC will get the prize money 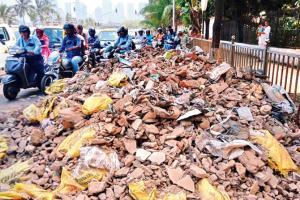 
Citizens could win Rs 10,000 from the Brihanmumbai Municipal Corporation's (BMC) G southward office, if they give officials accurate information about a truck that dumped construction debris on a South Mumbai road. On Tuesday, Lala Lajpat Rai Road from Lotus Junction to Haji Ali junction saw traffic chaos due to the debris. The prize will be given to the person who gives accurate information about the dumper and its driver to the BMC.

Local residents claimed that a private truck dumped the huge pile of debris and leftover construction material on Lala Lajpatrai Road. As it is an arterial road carrying heavy vehicular traffic, it was blocked during peak hours inconveniencing citizens.

To the dismay of commuters, the debris was cleared by the staff of G South ward only around 1.00 pm. Civic sources revealed that it took a while to clear it as they had few machines. A civic official said, “We have registered a non-cognisable offence with the Mumbai police. Once the driver is identified he will be penalised Rs 20,000, and the RTO can act against the owner of the dumper.”
In a rare instance, the BMC has announced prize money to citizens who help them trace the culprits. Civic sources revealed that the instructions to announce it came from Municipal Commissioner Pravin Pardeshi. He wants this to be an example for those who inconvenience the public at large and feels involving citizens is the key.

The Assistant Municipal Commissioner of G south ward, Devendrakumar Jain, has said that citizens who have information about the culprits can contact the G South Control Room number 24224000 and mobile number 9869107898. The BMC will also put up posters informing citizens about the prize and another mobile number where they can call, 9920607149.

Next Story : Man rapes teenage girl in Bandra, blackmails her with video