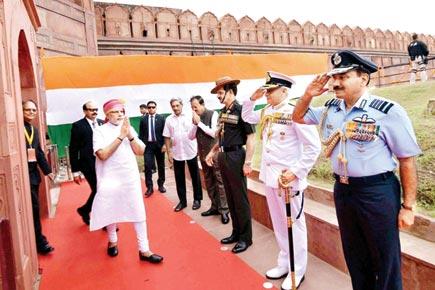 Independence Day is an annual occasion for celebration — and of reflection — in a sense of summing up the year gone by, and setting benchmarks for the year to come. We don’t have much to celebrate this year; we’ll celebrate the good monsoon only in the coming year.

But there are other downers to ruin the mood. Despite two years of promise, the economy remains bumpy, tensions in the countryside exacerbated by triumphalist Hindutva hard-liners pose a grave risk to the social peace of large parts of northern India, and the situation in Jammu & Kashmir is, perhaps, the worst since the 2008 Amarnath yatra agitation. 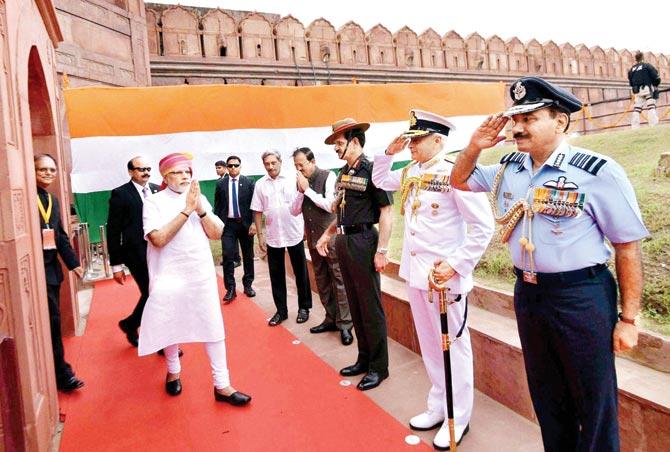 Narendra Modi was elected prime minister to transform the economic life and governance of the country. He says he remains committed to those goals though the problems are obvious. Though the economy is on the mend, the recovery process is taking an uncommonly long time and has yet to gain momentum. The persistent refusal of private sector investment to put down serious money in the economic plans of the country is leading to what is being called ‘growth without investment’ which is now accompanying jobless growth.

For the common man, there is as yet no respite from inflation with almost all staples like dal and vegetables selling at astronomical prices. A consumption bump of sorts will come with the release of the arrears of the 7th Pay Commission, but it is well known that this is the worst way of trying to achieve high economic growth.

The problem of governance has emerged with the rise of the gau rakshaks in states ruled by the BJP such as Gujarat, Madhya Pradesh, Haryana, or where the party is a member of the coalition, as in Punjab. The issue, which pits the upper caste Hindus against the Muslim minority and Dalits, has the potential to destroy India’s rural economy and social fabric. Some of this has been recognised by the PM in his Independence Day address; the only problem is that while he senses the political danger of alienating the Dalit community, he sees no need to address the equally dangerous effort to marginalise the Muslim population.

The situation in the foreign policy front is equally dismal. New Delhi seems to have lost the plot in dealing with its difficult customers —Pakistan and China. There is an argument that, given the way that these two countries have pushed around India in the past, the Modi government’s hawkish tit-for-tat approach is a long-needed corrective. But foreign policy is not about satisfying the national ego and assuaging national angst. It is about preserving and extending one’s national interests. It is here that the sheer negativism of the approach stands out. The PM’s references to Balochistan may have gladdened the hearts of his bhakts, but they are likely to achieve little, other than to satisfy our ego. No matter how you look at it, no country in the world questions Balochistan’s accession to Pakistan, whereas virtually no country in the world categorically recognises Jammu & Kashmir’s accession to India.

The border conversation with China or the effort to pin down Pakistan on the issue of terrorism have little to show for themselves. There seems to be alarming subtext in a lot of government declarations that India would not mind a bit of a scrap, if push came to shove. The least that our chicken hawks should consider is the lamentable state of our military which could well land us with egg on our face, were we to seek some ill-advised military adventure.

Indeed, when doing the sums on Independence Day, the one area we find that the plus side of the ledger is empty, is that of the defence services. The much vaunted Make in India is proving to be like the proverbial tale of the blind men and the elephant. Figuring out just what ‘Make in India’ means is proving to be equally problematic. But that is the least of the worries, the bigger ones relate to the delays in carrying out the deep restructuring and reform of the military services themselves.

The performance of the Prime Minister himself has been less than stellar. It took him four weeks to react to the Una incident which took place in a state that he had run since 2002. However, the hopes of the country continue to rest in his leadership. He remains the premier political figure of the country and the citizens continue to place their trust in him. His own inclination is to avoid controversial issues and seek the high ground where he can. He now seems to be adopting a strategy of bashing Pakistan to seize the nationalist high ground with his core constituency at home. The problem is that verbally chastising Islamabad is one thing, but trying to execute those policies on the ground are a recipe for disaster.

As it is, there is a feeling that his effort to consolidate his political position by eliminating as many Opposition ruled governments in states, and winning as many state assembly elections as he can, have detracted from the ability of the government to deliver on its promises of good governance and economic growth. But if in the consolidation of his government the constitutional and social order are damaged, there could be long-term negative consequences for the country.

Next Story : The kindness contagion