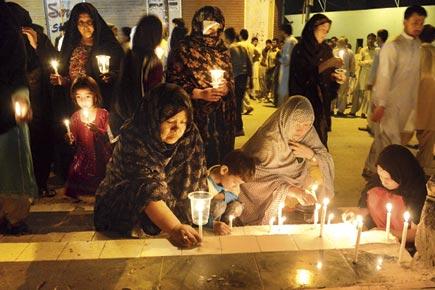 Human Rights Watch (HRW) recently released a heart-rending report titled ‘We are the Walking Dead’ on the plight of the Shia Hazara community in Balochistan.

The 62-page report is an indictment of the state’s failure to protect Shias from being massacred by the Laskhar-e-Jhangvi (LeJ), a banned militant group.

The accounts of Shia Hazaras interviewed by HRW will send shivers down anyone’s spine but the apathy shown by Pakistani authorities towards their plight is downright nauseating, to say the least.

According to the HRW report, “While the LeJ has continued to attack and kill with impunity, Pakistani authorities have responded by suggesting that the Hazara accept ever-increasing curbs on movement and religious observance, and ongoing economic, cultural and social discrimination as the price of security. 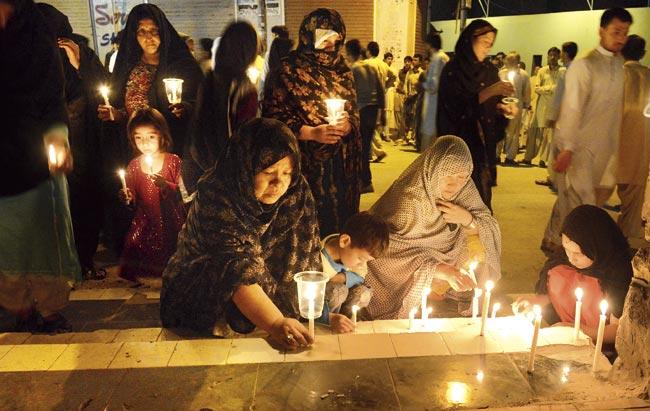 Pakistani Shiite Muslims light candles to protest against the killing of Shiite pilgrims  in Quetta on June 10, 2014. At least 24 Shiite pilgrims — including 10 women — were killed in a gun and suicide attack on the restive Pakistan-Iran border. Pic/AFP

The persistent failure of the authorities to apprehend attackers or prosecute militant group leaders claiming responsibility for the attacks suggests that the authorities are incompetent, indifferent, or possibly complicit in the attacks.” The Shia Hazaras are considered to be the one of the most peaceful communities in this country and yet they are being targeted mercilessly for their faith.

HRW’s Brad Adams says, “There is no travel route, no shopping trip, no school run, no work commute that is safe for the Hazara. The government’s failure to put an end to these attacks is as shocking as it is unacceptable.” Frankly speaking, hardly anything shocks us anymore. Apart from a handful of progressive and sane elements that raise their voice for the minorities, nobody even bats an eyelid when Shias or other religious minorities are target-killed.

It is the government’s responsibility to nab the murderers of Shia Hazaras but the way the authorities have turned a blind eye to the massacre, one is left with no hope of justice ever being served. Balochistan is a province heavily guarded by the military due to the Baloch insurgency so it is hard to imagine that the LeJ can operate there with immunity without state collusion.

The Shia Hazaras are indeed the walking dead; their murderers waiting to kill at will. Ahmadis, Shias, Christians, Hindus and other religious minorities in Pakistan live in extreme fear. Many of them have had to leave the country because of the state’s unwillingness to protect them.

The state patronage provided to extremist militant groups who target the minorities adds to their woes. Saudi influence is another huge factor when it comes to religious extremism in Pakistan. The Saudis keep pumping money into madrassas to fan sectarianism.

The state of Pakistan descended into chaos many decades ago but more alarming is that its society’s moral fabric is now fast eroding. Shaista Lodhi, a morning show host on Geo TV, had to flee the country after receiving death threats because ARY News host Mubasher Lucman accused that blasphemous content was aired in her show.

What can one expect from a country where a young girl like Malala Yousafzai is accused of being a foreign agent and where conspiracy theories abound regarding her shooting? In a country where a journalist who got shot six times is treated as a criminal rather than a victim, one can hardly expect any sympathy for the religious minorities.

The writer is a Pakistani journalist. Reach her at mehmal.s@gmail.com

Next Story : A Star is born