Before BCCI secretary Amitabh Choudhary came down hard on Hardik Pandya and KL Rahul, the Indian cricketers received a lot of flak for their sexist comments on the entertainment show hosted by Bollywood director Karan Johar 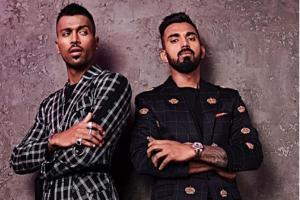 
BCCI secretary Amitabh Choudhary has urged the Committee of Administrators (CoA) to immediately suspend Hardik Pandya and KL Rahul for their crass comments on a TV show Koffee with Karan.

The Indian cricketers have received a lot of flak for their sexist comments on the entertainment show hosted by Bollywood director Karan Johar.

Amitabh Choudhary in his email to the CoA, which was accessed by mid-day, said: "Suspension is in any case not punishment and for the reported misconduct, this suspension (pending inquiry) should have happened yesterday itself, consiering it was reported early (India Time). Therefore, the suspension must happen immediately.

"It is surprising that the matter is being sought to be disposed of hurriedly and surreptitiously as in the earlier case of sexual harrasment.

"Legally, the inquiry can be conducted only in accordance with the provisions of the registered constitution and not sought to be done by an 'independent committee".

"In view of the ODI in two days, the team/team management should prepare itself accordingly."

Earlier, Indian cricketers Hardik Pandya and K L Rahul were issued show cause notices by the BCCI for their comments on women on a TV show that triggered a massive outrage.

"We have sent showcause notices to Hardik Pandya and K L Rahul for their comments. They have been given 24 hours to give an explanation," Chairman of the Committee of Administrators that runs the BCCI, told Vinod Rai.

Next Story : Watch video: Shikhar Dhawan playing a flute is breaking the internet!