Tracing lesser-known chapels of Mumbai through 'The Churches of India'

In her new book, The Churches of India, Sydney-based author Joanne Taylor takes a pilgrimage across the country, and unearths lesser-known chapels 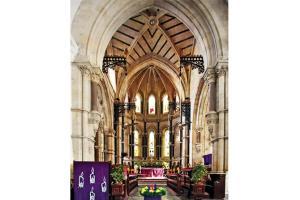 The iron fixtures supporting fans in the Cathedral of St Thomas


The Churches of India (Niyogi Books) by Sydney-based scholar Joanne Taylor is a deep exploration into the church architecture of India and the several colonial powers that influenced it. Also the author of Forgotten Palaces of Calcutta, Taylor has been visiting India since 1971. With a significant section dedicated to Mumbai's churches, including the cathedral from where Churchgate gets its name, and the Dadar church designed by architect Charles Correa with a skylight designed by artist MF Husain, Taylor takes us through her research, from the aisle to the nave.

How was your interest in Indian architecture and history sparked?

My visit to North Kolkata was a starting point. I was fascinated with the old zamindari houses and mansions, [which were] such a contrast to the small, poor dwellings alongside. I wondered who built them, why were they in such a sad state and what happened to the owners. That was the beginning of my first book, The Forgotten Palaces of Calcutta.

What did the research for The Churches of India include?

I'm not sure how many times I have been to India for this book, probably around five times, including three trips to Goa, because I didn't like the photographs I took of a church there. All the churches have small brochures on the history of the building. I looked for the caretakers of churches, who would often let me in. Often I was told interesting stories or shown things I wouldn't have found otherwise.

Which are some of the biggest differences, in terms of design and aesthetics, between the churches of Mumbai and the rest of the country?

Mainly, it is the use of the neo-Gothic style in Mumbai. Though there are Gothic-styled churches here and there across India, it is Mumbai that has the greatest collection. The Gothic style has been a huge architectural influence on church architects for centuries. Its use of flying buttresses enabled architects to spread the weight of taller walls and towers. Before Gothic architecture, medieval architects had problems with the weight of stone walls. Towers had to be short and walls thin or the building would collapse into itself.

Mumbai's history is written into the walls of the St Thomas Cathedral. If it wasn't a religious structure, do you think it would still be standing almost 200 years later?

Possibly not. Over the years there was an increase of building knowledge and experience, which meant that stone began to be cut precisely, so that it fitted alongside other stone blocks exactly. Churches and cathedrals were built to last.

What role does religion play in the preservation of buildings?

Churchgoers have great faith in these buildings and many parishioners of their favourite church will lend a hand in keeping the church well looked after and cared for. Perhaps, it is faith that is the important word for why these buildings are well-preserved. Getting back to St Thomas Cathedral, it is well-maintained on the exterior and the interior with lots of pleasant gardens around. It is functioning with programme guides and such. As a former British colonial church, now frequented by Indian Christians, the loving care it is given could be seen as an example of faith.

A surprise was the Charles Correa-designed church, Our Lady of Salvation, in Dadar. Can you please elaborate on your impression of it, especially compared to the neo-Gothic churches in the city?

Our Lady of Salvation in Dadar, as designed by Charles Correa, and skylight by MF Husain

I discovered this church when researching all of Mumbai's churches, either from books or the Internet. I compiled a list then decided which churches should be included. I was quite taken with the church in Dadar as rather than a grand façade, it is rather humble and unobtrusive. I liked that. Many worshippers [from weak economic backgrounds] can be intimidated by entering an enormous neo-Gothic church building. However, Correa designed an inclusive church for all to enter and feel at home.

Next Story : Too many cooks...