What you didn't know about Woodside 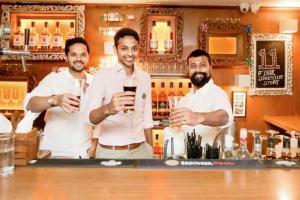 
1 In 2006, Sumit introduced Pankil — his friend from since junior kg — and Abhishek — his friend from culinary school — in Goa where Abhishek had invited them for the launch of his restaurant Kamasutra on Baga beach. Between missing flights and bidding farewell to a friend who was moving to the US, the three became thick friends.

2 The first idea for the space was a Subway franchisee. "Thankfully that idea bombed," says Sumit.

3 The idea for a gastropub was born on February 7, 2007, when Pankil and Sumit sat drinking beer at Toto's in Bandra.

4 In the 70s, the space was a barber shop. In the early 1980s, Gambhir's father opened Woodside Inn, a vegetarian restaurant that served the city's first pizza. "Behram Contractor had interviewed my father for this. We used to serve Indian Chinese, Continental fare and tea and coffee. Till date, senior customers come to me telling me this is where they met their partners on a date, or that they frequented the space after college."

5 The trio tested craft beers two years before the concept of craft beers was introduced in India. "One day, we had Rahul Mehra, who went on to launch Gateway Brewery in November 2011, ride in on a cycle with a bucket he said contained beer he had made at home! Our first thought was, what if we drink this and die!" laughs Sumit, adding, "Today his beer is available on tap across 120 bars in Mumbai. The gastropub was one of the first ones to get his beer on tap in January 2014."

6 From inception till date, the highest seller is the double cheddar tenderloin burger. "We have refined the recipe, changing the fat to meat ratio, getting the mix of right body parts for right bite. It's 11 years of perfection," says Pankil.

7 In the early days, the trio felt the wild mushroom risotto was too ahead of its time. "We were 25 years old then. If we think of the dish today, it is no big deal."

9 One of the first regulars at the joint was Rishad Nathani, who at the time was conceptualising The Clearing House with chef Nitin Kulkarni

10 Sumit also got married a few days before the opening. "It was a crazy experience to have our first restaurant open and also have one amongst the three of us get married! The only time Woodside Inn has ever remained open after hours was a night before Sumit's wedding when we decided to have a boys' night out there! Sumit should feel very special!" says Honawar.

11 While Honawar admits out of the three, he is the mildly hot-headed one, when it comes to holding alcohol, Sumit is the lightweight! "Pankil and I drink more potent stuff. So, it could go in any direction!" he laughs.

Next Story : Rapper Enkore strikes an emotional chord with Mumbaikars