Meet the 'real people' behind ads endorsed by celebs

Film stars, cricketers, models are the faces of brands in TV ads. But the hands, legs or the hair in the ad belong to someone else most of the time. Saurabh Datar talks to these ‘faceless’ people

Abhishek Bachchan and Aishwarya Rai are on the sets, shooting a commercial for a range of cooking appliances. The star couple has made time from their busy schedule to be at the sets. “Cut!” yells the director after the shot is done. He praises them for their work and the stars make their way to their vanity vans. Now, Sheetal Tiwari and Prashant Salian take their place in front of the camera, wearing the exact same set of costumes worn by the stars. The cameraman takes their shots. It’s not that these two follow their favourite stars around, even wearing the same clothes as them. The two are body part models.

Prashant Salian has been a body double for Abhishek Bachchan and Akshay Kumar. Pics/Nimesh Dave

A body part model, in advertising, is someone who only models part/s of his body for that commercial — hands, legs, hair, back — and not his /her face. A celebrity is the face of the brand which lures people to buy the product. But, they are not as perfect as they appear. “Many celebrities and stars may have a great face, but their fingers, hands, feet look terrible on camera,” says veteran ad man Prahlad Kakkar. With the camera zooming in on the body parts, every imperfection can be seen clearly.

Model Sheetal Tiwari, whose hands were featured instead of Aishwarya Rai’s hands, in a TV commerical

“This is especially true with sportsmen, whose face and presence help the brand, but their body isn’t in the best presentable form, by the very virtue of their profession,” says another producer, who has worked on several commercials, but didn’t wish to be named. And in advertising, what doesn’t look good simply doesn’t stand a chance. Enter the body part models, with their long, supple fingers, smooth skin, gorgeous hair and well-toned bodies.

Roma Aroraa, whose hair has made it to many ads

The main star gives his takes for the scenes where s/he is seen. After that, his job is done. These models do only shots in which the body parts are seen up-close: a hand moving through hair, applying soap, lifting/using the product, holding the bat, a leg dangling from a chair, kicking the ball, hair soaked in shampoo, a man sitting in a bus with his back to the camera, a man running and so on. 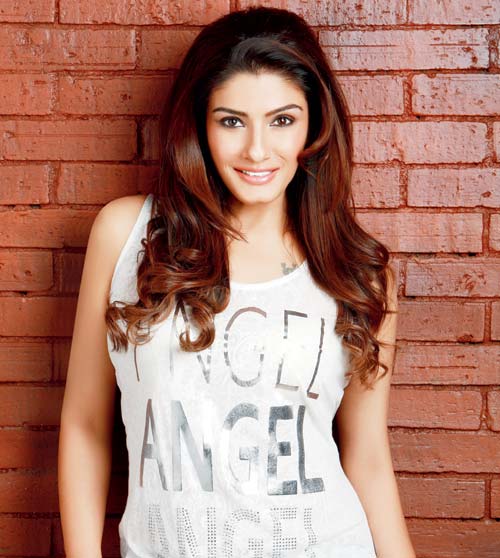 In advertising parlance, the shots involving a product are called ‘product shots’ or ‘product window’. Typically, this involves a hand/leg/back and the application or use of the product. Others, without any product or face, are establishing shots — meant to set up a context that an act has been performed by the main star of the commercial.

Part-time profession
Twenty two-year-old Tiwari is a hand model. Her fingers are long, slender and graceful — not a spot or blemish in sight. And fair, that goes without saying. “I’m actually an actor, but I do this for the extra income,” explains Tiwari, whose hands featured recently in commercials for Prestige Cookware (she stepped in for Aishwarya), a Tanishq jewellery commercial for south India featuring Sridevi, and a spot for Tide soap. She started doing commercials while auditioning for roles in TV serials. A model co-ordinator noticed her hands and asked her to send pictures. That’s how she started being a hand model.

Her colleague in the ad for Prestige, Salian, is a body double for Abhishek Bachchan and Akshay Kumar. “I’m about 6’2” tall and have the same body structure as Abhishek Bachchan. I even have a stubble like him,” says Salian. He’s utilised for his hands and a shot where he (pretending to be Abhishek) is walking away with his back to the camera. Salian has also run for Akshay Kumar in a Thums Up commercial.

Most body part models stumble upon this job while looking for more opportunities in their mainstream career — acting or modelling. “We get models to send us their pictures. If someone has good hands or hair, we use them for body parts modelling,” says Pappu Lekhraj, who has been in the casting business for more than 25 years. “Once, Kapil Dev fell ill during a shoot and couldn’t make it. Hence, we had to use a hand model and a body double to do some shots,” Lekhraj tells me.

For hand model Neelambari, 26, it was sheer luck. She had gone to advertising agency Lowe to submit pictures for modelling assignments. An agency executive noticed her hands and got her an assignment in a Santoor commercial the very next day. Neelambari is an experienced hand (pun intended) and has done ads for L’Oreal (Aishwarya’s hands), Pantene (Shilpa Shetty’s hands), Garnier, Maggi and Elle. She has also worked as a back model for Lux, where only her back is shown in an establishing shot.

It’s not always that celebrities have bad body parts. Some stars may have aesthetic limbs, but the sands of time slip through the fingers anyway. Twenty four-year-old Roma Aroraa is a hair model who filled in for Diana Penty in a Tresemme commercial. “My hair is being washed with shampoo in the ad,” she tells me. Aroraa’s hair is a rich brown colour, with beautiful curls and smooth texture that invokes envy among many women. Such shots, involving application and use of products, require several retakes to get the perfect angle and aesthetics right. Stars simply don’t have the time to give so many retakes. Body part models, on the other hand, are much more obliging.

“Also, celebs endorse a wide variety of products. They can’t really apply all those products on their bodies; it’ll damage their skin and look. That’s why we get these guys,” says a production house executive.
Quite often, the star or celebrity doesn’t have the inclination to film some parts of the commercial. Recalls Trupti Kataria, a freelance producer who has worked on several ad films, “We had the star of a popular TV soap in an ad, but he refused to do some scenes, which involved some caricature comedy. So we had his body double do them.”

‘A gift from God’
“I consider it God’s gift that I got such good hands,” Neelambari exclaims. It’s true, you either have it or you don’t. It’s like being tall, you either are, or you aren’t. And there’s nothing you can do about it. Most hand models also tend to have good legs, and feet. Aroraa does hand modelling, hair modelling and leg modelling. Like Tiwari, she also wants to become an actor. An MBA graduate from Delhi, she left her job as an HR professional and came to the city for a big break.

Not everyone is an aspiring actor or model though. Kakkar has worked with some housewives ‘with lovely hands’. Ajay Sharma (name changed on request), another hand model, does it discreetly. “I just came back from a shoot where I was the hand model for Hrithik Roshan,” he explains. Sharma tells me not to quote him in this story, as his family doesn’t know about his ‘other job’. “I actually work with my father in his business. Nobody knows about this. Please don’t use my name,” he pleads.

For those who want to make a career in showbiz, it’s a learning experience. “We get to know how camera angles are used, how lighting affects the shot and other such technical aspects,” adds 31-year-old Salian, who has been a model for both print and TV ads. The rest do it for money, till a big opportunity knocks on their door. The money’s good too. Lekhraj tells me, “Remuneration varies depending on the brand, production house and the client. There’s nothing fixed the amount is different for each project.” Models can earn anywhere between R5,000 to R15,000 for one ad. Some may even rake in Rs 20,000.

Work doesn’t involve a lot of physical activity, and most ads are shot within three to four hours. But sometimes, body part models may have to wait for entire days on sets. “It depends; if the hand/body close-up shots are interspersed between the main shots, we have to wait for the entire day,” says Aroraa. The wait can be agonising. Still, the extra income helps when assignments are sporadic, as Neelambari puts it.

Kakkar, who has worked with the biggest stars in the industry, says that with stars’ increasingly busy schedules, body part modelling is in much demand today. “Whenever we have to show something on screen, it has to look the best. If the main model doesn’t suit the bill, we get someone else’s part that does,” he states. Actor Raveena Tandon, who was Kakkar’s assistant in her early days, was a lip model.

“She probably has the most sensuous lips in the business. We used her lips for shoots a lot,” confesses Kakkar, adding, “And Sonu Walia. She had beautiful hands. She did a lot of hand modelling.” Preity Zinta is said to have been a leg model. It does make sense. The hands and legs of today are the faces of tomorrow. We may as well see some of these people on the big screen in some years. Who knows?

Star Trivia
According to veteran ad man Prahlad Kakkar, Bollywood actress Raveena Tandon probably has the most sensuous lips in the industry. He adds that they used to use her lips for many shoots. He also remembers Sonu Walia, who had the most beautiful hands and went on to do many modelling assignments.