More than five years ago, Salman Khan and Shah Rukh Khan— two of the biggest stars in the industry — had a major spat at a party held in Mumbai. Since then the chill between the two actors seems to have thawed. At least that’s what it looked like at a recent awards do. 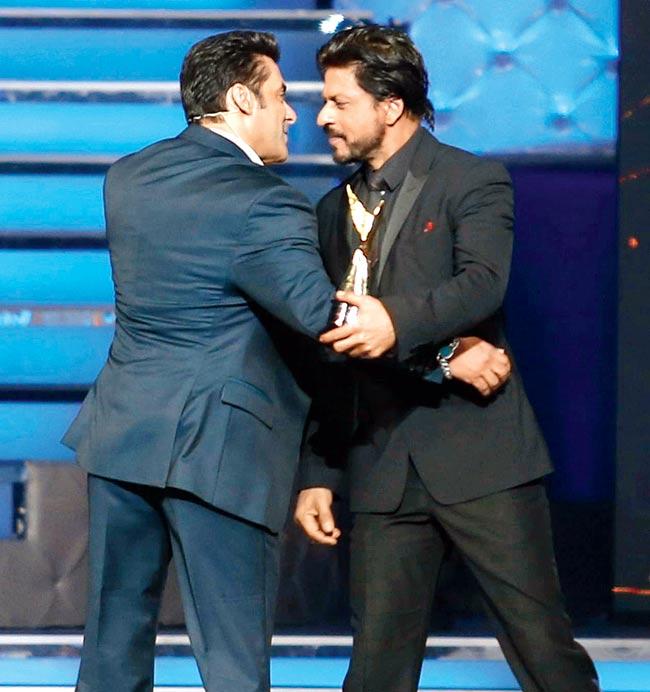 Salman Khan and Shah Rukh Khan at the event

Held at the NSCI stadium in Worli on Thursday night, the event saw emcee Salman Khan share a warm hug — twice —with SRK. When Deepika Padukone announced that SRK had won the Entertainer of the Year award, the beaming actor came on stage and made it a point to hug both Deepika and Salman.

What’s more, he had lavish praise for the latter. “It feels nice to have won this award, especially because I am in the company of Salman Khan, who I think is among the greatest entertainers in the country,” he said upon receiving the award.

To which Salman replied that he loved SRK in the film Chennai Express. “Now that I have appreciated your work, please say the same about my film Jai Ho,” he said.

If this is not enough, the Dabangg actor even locked Abhishek Bachchan in a warm embrace. However, Salman was not willing to forget all of his past animosity: when actor Vivek Oberoi came on stage to collect an award for his film Grand Masti, Salman quickly moved away, his face wearing a serious expression. The event also saw some high-energy performances by Kareena Kapoor, Prabhu Deva, Sonakshi Sinha and Shraddha Kapoor.