Chhattisgarh is the first state in the country to procure Gaumutra,Chief Minister commenced the procurement of Gaumutra in the state, on the occasion of Hareli Tihaar.

Chief Minister sold Gaumutra on the occasion, and became the first seller. Another initiative to promote organic farming in Chhattisgarh. Organic pesticides to be produced in Gauthans along with the organic manure. 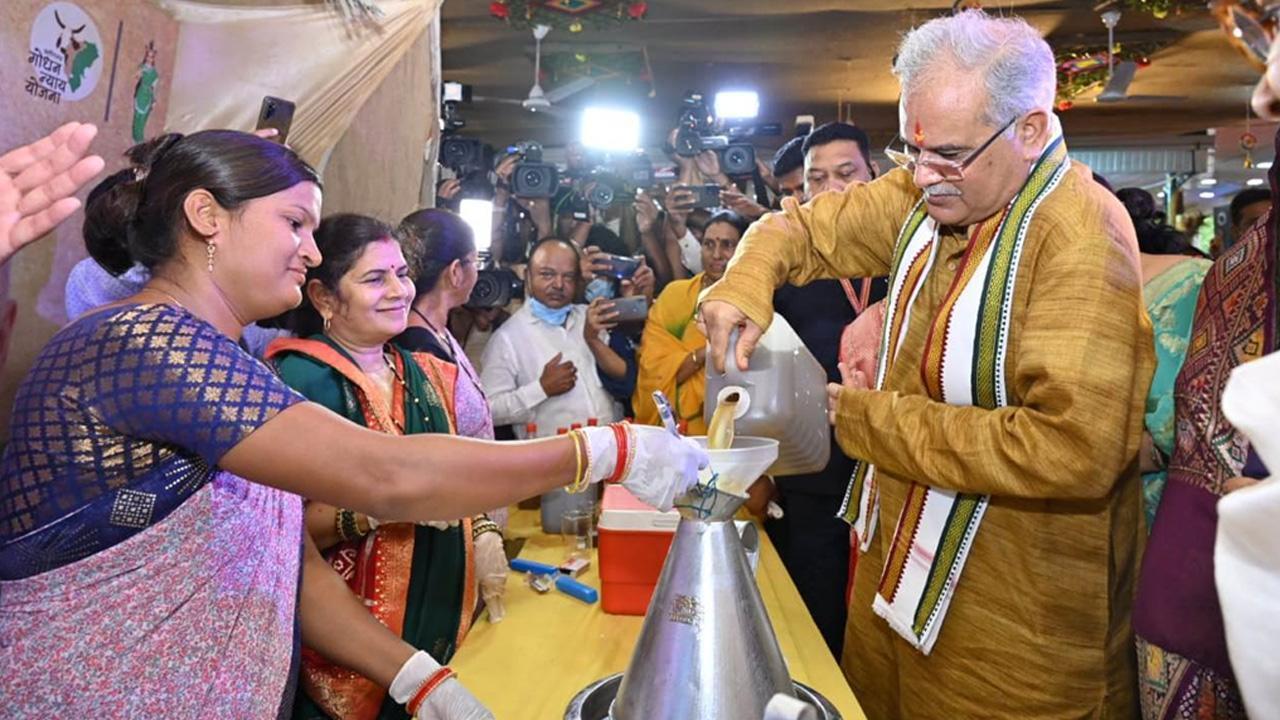 Chhattisgarh is the first state in the country to procure Gaumutra at the rate of Rs 4 a liter. It is known that Chhattisgarh is also the first state of the country to procure dung from farmers and villagers. At the grand Hareli celebration programme organized at CM House, Chief Minister worshipped the agricultural equipments and toolds, and prayed for the prosperity of the state. Chief Minister fed fodder to Gaumata and worshipped her. On this occasion, Chief Minister also distributed incentive (bonus) amount of Rs.17 crore to 7442 women self-help groups of the state, for producing organic fertilizers.

In his address to the programme, Chief Minister Mr. Bhupesh Baghel said that considering the multi-dimensional positive impact of Godhan Nyay Yojana, many states of the country have started adopting this scheme. Under this scheme, people from all sections of society are selling cow dung in Gauthan at Rs 2 a kg. In the last two years, an amount of more than Rs 300 crore has been transferred to the accounts of cow dung vendors, Gauthan committees and women's groups through Godhan Nyay Yojana. He said that Chhattisgarh Government is committed to make the farmers and the agriculture sector of Chhattisgarh prosperous. He added that the increased use of organic fertilizers and organic pesticides will reduce the cost of farming and also improve the quality of food. It is noteworthy that Chhattisgarh Government is the only government in the country that is procuring cow dung from the cattle rearers in rural areas of the state for last two years. And today, on the occasion of Hareli Tihaar i.e. on July 28, Chhattisgarh Government has officially commenced the procurement of Gaumutra in Chhattisgarh, with the aim to promote animal husbandry  and organic farming in the state. Dung procured under the scheme is being already utilized to produce organic manure and now the Gaumutra procured at gauthans will be used to manufacture organic insecticides, Jeevamrut, growth promoters. This would not only promote organic farming but will also reduce the input cost of farming.

It is worth mentioning here that Godhan Nyay Yojana was started in Chhattisgarh 2 years ago on 20th July 2020, on the day of Hareli festival. Under this scheme, cow dung is being purchased at the rate of Rs 2 per kg from the cattle rearing villagers. Considering the unmatched success of Godhan Nyay Yojana so far, Chhattisgarh Government has decided to expand the scope of the scheme and procure Gaumutra as well. The motive behind this decision is to improve the quality of food production and to reduce the cost of farming.

Indiscriminate use of chemical fertilizers and chemical pesticides in agriculture is destroying the nutritional value of food items and is also affecting the fertility of land. Now with the Gaumutra procured in Gauthans, women groups will produce organic pesticides, which will be made available to the farmers at a subsidized rate. The cost of these organic pesticides will be much less than the cost of expensive chemical insecticide pesticides available in the market. Agricultural scientists believe that cow urine is a better and cheaper alternative to insecticide, chemical insecticide. Its disease resistance is much higher than chemical insecticides.
It is worth mentioning that Gauthans have been built and are being operated in 8408 villages of the state, under the Garva component of Suraji Gaon Yojana. In these Gauthans, Over 76 lakh quintals of cow dung has been procured in last two years, in lieu of which an amount of more than Rs 153 crore has been paid to rural cattle farmers. Women groups have so far produced more than 22 lakh quintals of Vermi Compost, Super Compost, Super Compost Plus from the dung procured. These organic fertilizers have been made available to the farmers of the state for agricultural use. Apart from manufacturing organic manure from cow dung, women are also conducting other income oriented activities in Gauthan and from these they have earned an additional income of Rs 74 crore in last two years.

*Chief Minister Mr.Bhupesh Baghel writes a letter to the Union Minister of Coal and Mines

*Requested SECL to provide 1.5 crore tonnes of coal every month to the state's steel manufacturers and other small units

Chief Minister Mr.Bhupesh Baghel has written a letter to the Union Minister of Coal and Mines Mr. Pralhad Joshi, requesting him to direct the SECL officers to maintain uninterrupted supply coal to the steel manufacturers of Chhattisgarh. He said that at present 60 lakh tonnes of coal are being supplied to the steel manufacturers of Chhattisgarh by SECL per month, while their monthly requirement is about 1.5 crore tonnes. The decision of SECL to cut the coal supply to the steel-producing industries of Chhattisgarh from August will seriously hit the economy of the state.
In the letter, he stated that more than 15 crore tonnes of coal are produced annually in Chhattisgarh. Chhattisgarh ranks second in the country in coal production. Most of the coal produced in the state is supplied to other states. Chhattisgarh is also one of the leading states in the country in the field of steel production. Apart from many large steel-producing units, there are hundreds of small units in the state as well, lakhs of people depend on these industries for their livelihood. For the last 6 months, the country is facing a coal crisis and the coal produced in Chhattisgarh state has been supplied to other parts of the country on a priority basis, the operation of passenger trains in the state has been suspended for many months, due to which lakhs of people are facing innumerable difficulties.

The Chief Minister further stated in the letter that "Steel manufacturers of the state are currently being given 60 lakh tonnes of coal per month by SECL, while their monthly requirement is about 1.50 crore tonnes. You will agree that it would be a very unfortunate decision for the leading coal-producing state of the country not to be able to supply coal to its small-scale industries."

The Chief Minister has requested the Union Minister of Coal and Mines to direct the officers of SECL to continue the uninterrupted supply of coal as per the requirement of the steel manufacturers of the state so that a potentially harmful consequence on the economy can be avoided in the state.