It is the first time that a cosmetologist from India has earned a PhD from the British National University of Queen Mary, UK. He is none other than the most awarded and renowned cosmetologist as well as aesthetician Dr Lalit Kasana. 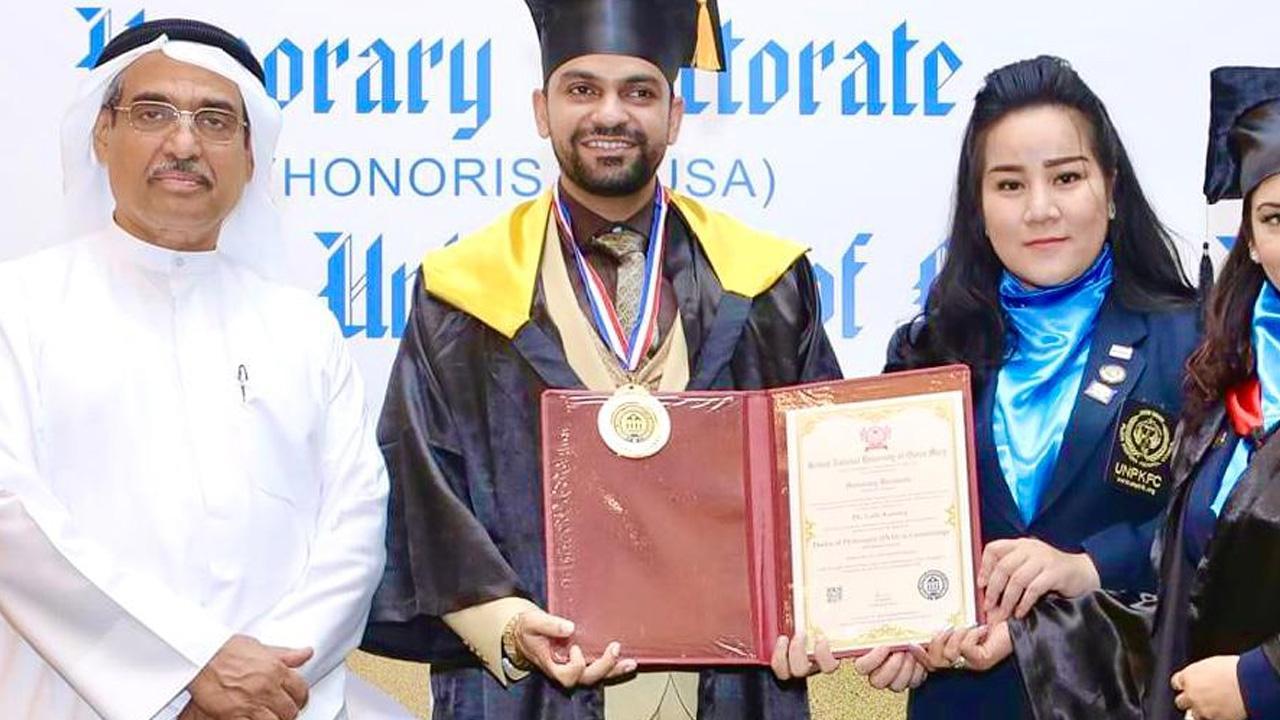 He is known by his name in the world of homeo-aesthetics and cosmetology because of his extraordinary work. He holds the world record for most mole removal in 60 seconds, he removed 38 moles in just one minute.

This Honorary Doctorate is like one more precious jewel in his collection as he has been awarded numerous awards and recognitions. This “Convocation of Honorary Doctorate” had been organised by the United Nations Global Peace Council. Dr Kasana has been honoured by the British National University of Queen Mary, the UK at Habtoor Grand Autograph Collection, Marina Dubai on “9th September 2022”.

This doctorate is the witness to Dr Kasana’s rich experience in the field of cosmetology and aesthetics. He is the founder of Greater Noida’s best cosmetologist and first homeo-aesthetic clinic, Dr Kasana’s Clinic. He has treated numerous clients with skin issues using the latest technologies, and laser treatments and has provided treatments for hair care problems too. Not only this, your dental issues can be treated well by the experts as well. He introduced the homeo-aesthetics clinic in India and is followed by individuals globally.

There are millions of subscribers of Dr Lalit Kasana’s YouTube Channel from all around the world. His youtube videos explaining the root cause and solution of the skin issues have grabbed the eyeball of everyone. Not only this, being a doctor he understands the need for chemical-free and organic products, because of which he has launched his website “The DoctorsKart”. The DoctorsKart consists of haircare, nutrition and skincare products which cause zero harm and claims to be the best and most effective products for all skin types.

Coming back to the educational qualification Dr Lalit Kasana has completed his B.H.M.S from HMC Abohar(Punjab), He is also having a degree of MD(Hom) from Bakson College, Noida(UP). In 2011, he completed his 1st Course in Clinic Cosmetology & Aesthetics Medicine from IIC(Indian Institute of Cosmetology) in Mumbai. Dr Kasana has also done certification courses from IIC, Mumbai in Clinical Research under ICH-GCP Training. Apart from this, he has completed his P.G.D.C.C(P.G Diploma In Clinical Cosmetology) from the Institute of Laser & Aesthetic Medicine, University of Greifswald, Germany.

He never fails to amaze us with innovations and has made a great impact on the medical industry. He has launched the products, which are used by the doctors themselves. If we talk about his achievement, his cosmetic brand named "Doctor's Invention Professional" has been awarded as the “The Most Quality Assured Of The Year 2019” in the “International Excellence Awards 2019 at Malaysia”. Some of his awards and recognition include the Bharat Gaurav Award 2015, Medical Excellence Award 2015, Global Lifestyle Award 2015, Best Cosmetologist & Aesthetician in India 2017, Best Cosmetologist & Aesthetician in North India 2016, and Healthcare Icon of the year 2017.

Next Story : Rishab Mittal : The pain is worth the gain