Adding another feather in her cap, Sangeeta Ahir is ecstatic on seeing the superlative success of her film Dagadi Chawl 2 that features Makarand Deshpande, Ankush Choudhary and Pooja Sawant and is directed by Chandrakant Kanse 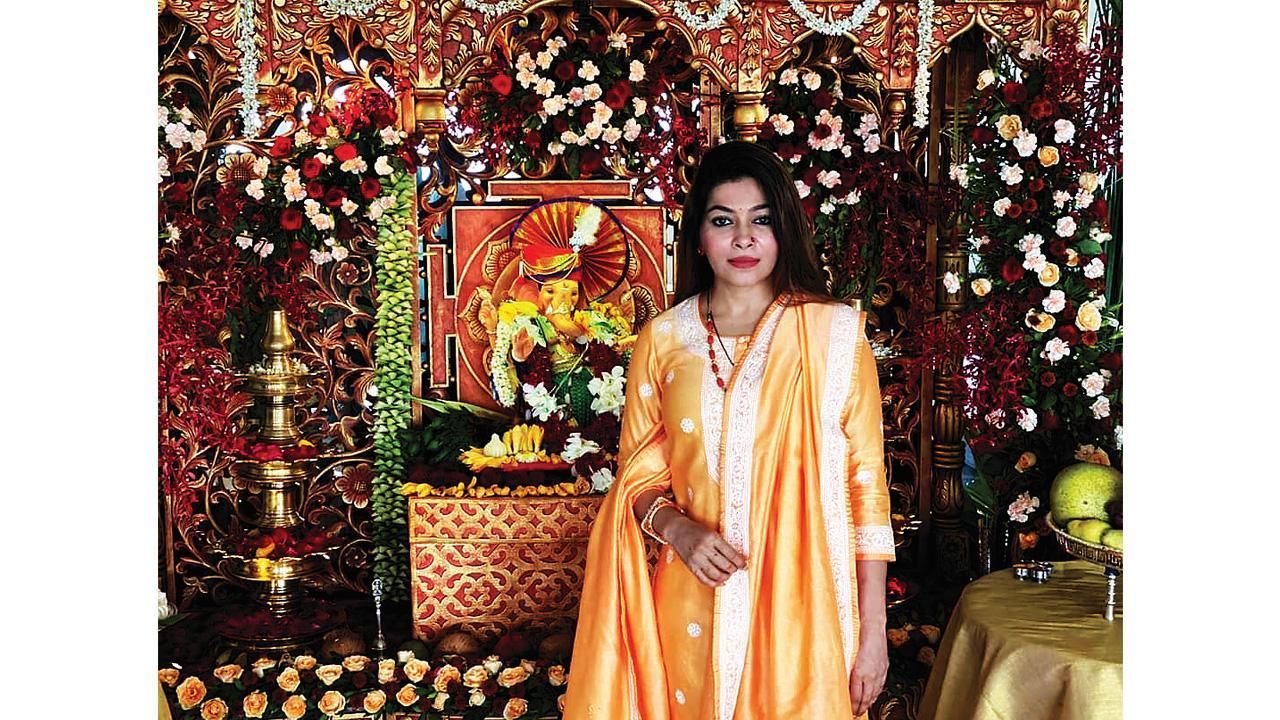 Sangeeta Ahir speaks exclusively to mid-day about the idea of making a film on Daddy (Arun Gavli) and the rationale of coming up with a sequel Dagadi Chawl 2.

To put it in her words:

The personality of Daddy’s (Arun Gavli) character is unknown to the masses. There was a time when the youngsters would line up outside Dagadi Chawl’s gate to join the gang and that was the craze. Our film is about how a simple man in this chawl manages such a big syndicate. The premise of our film is to explore the experiences of a youth who has once joined the syndicate, whether he can quit and come out of it or not. After our first film we received numerous suggestions that people wanted to see more of Daddy, and hence he is more prominent in the Second film.

We are very happy and satisfied with the reaction of the audience and people have given their mandate for all the hard work that we have done. People are thronging with their family and friends who are really enjoying the film Dagdi Chawl 2.

Entertainment is a stress buster for the people who have to come out of the cinema halls with a happy mind. And Dagadi Chawl 2 is exactly about it and not just a gangster film, it is complete high octane entertainment masala.

The film has released all across Maharashtra and in some Southern states and there is a great demand from other parts to have a multi-lingual release of this epic franchise so that it can reach a wider audience.

We have noted this suggestion so that everybody in India can get to see such a lovely film. The kind of international fan following the South Cinema commands is lacking in Bollywood films leave aside Marathi films. I think it is time to take our Marathi films across the world as today there is nothing such as a geographical limitation.   I think that it has become more of a franchise of its own, and feel that cinema takes its own wings, and there is no formula for a hit film as such.

Mumbai is a cosmopolitan city and Mumbaikars have taken it as almost a Hindi Cinema with a Marathi Tadka with super music and high octane action. I am impressed with the response and personally I think that Dagadi Chawl 2 is definitely a Pan India film.

We prodded Sangeeta Ahir to answer other questions:

What does it need to make such a Successful film?

If the filmmakers work hard and put all your energies, as once the film is made and sold to the distributor, the filmmaker’s work doesn’t stop here. It goes beyond like planning how your film will reach a wider audience and how will it make for the people to come to the cinema to watch it. One company produces the film, other company distributes it, the third company markets it, so this strategy falls flat.

The filmmaker has to aim to achieve the glory of a silver jubilee and that is cinema. That realization has to come else the survival of production houses are at stake. People do not have time and access to go to parks and gardens, entertainment and movies are the only source where they can take their families and friends to have a great time.

As compared to the first film, how different is the Dagadi Chawl 2 commercially and content wise?

The first Dagadi Chawl went through an unexpected phase and the film was released. We weren’t expecting such an amazing response at the Box Office. We took the responsibility because of the success of our first film. Dagadi Chawl 2 sees different characters coming to it. It was challenging putting them together, several ups and downs, the background score is different and technically many things have changed.

Let us know about other movies from Mangal Murti.

We recently released Suryavanshi in CP-CI as a distributor and we also did Golmaal, Total Dhamaal, Sanjay Gupta’s films. We were waiting for this film to release and now we are planning to get the best for audience which will bring them to theaters again. The grand old days will definitely be back for the Cinema Halls as we just saw the enthusiasm in people for our film it gives us so much of happiness and energy.

You will continue to see MANGAL MURTI FILMS in exhibition and distribution on a larger scale as well as into production as and when we come across good subjects.

I play a boy from a middle class family whose father was in the Police Force. What happens to this lad from an ordinary family and his love life once he joins the syndicate. The second film is about how this lad who defends himself against the pressure of Dagadi Chawl after he is out of the syndicate and aspires to live an ordinary life. Dagadi Chawl 2 has action, romance, hero, heroine and a family movie with great dialogues. People are showering more love for this second film as much as the love and adulation shown for Dagadi Chawl.

We are lucky to have a large hearted producer like Sangeeta ji who treated us like her own family. She is open to welcoming new ideas and inputs from actors like us. The commendable part is that the Mangal Murti team puts in equivalent effort for the film’s promotion akin to its making. Such grand digital and outdoor publicity has been seen for the first time for a Marathi film. Sangeeta ji has taken utmost care to see that the film doesn’t cross the boundary so that it can be watched by the youth and the elderly too.

“I am getting the most beautiful feedback of my life from viewers for the character I play ‘Colourful’ which was appreciated in the first film and now this character has come up with more colours. Colourful is showered with messages and blessing of more love from audience. Its a dream come true for me. The Mangal Murti team is like a family to me. It is heartening to see people flock to the cinema halls once more particularly for a Marathi film and I have enjoyed every moment in this film.

Chandrakant Kanse - Director of Dagadi Chawl 2 It is amazing to see audience enjoying our film and the credit goes to producer Sangeeta Ahir who has promoted it so well. In the first part we got the response that audience wanted to see more of Daddy, hence in Dagadi Chawl 2 there is equal prominence to Daddy and Surya’s character. Kids to elderly are enjoying this commercial film, that is not only confined to gang war, there are 4 songs - A sad song, romantic, an item number and a devotional song. We want people to come and enjoy our film for 2 hours as this film has outstanding dialogues. For the first time Daisy Shah has performed an item number for a Marathi film.