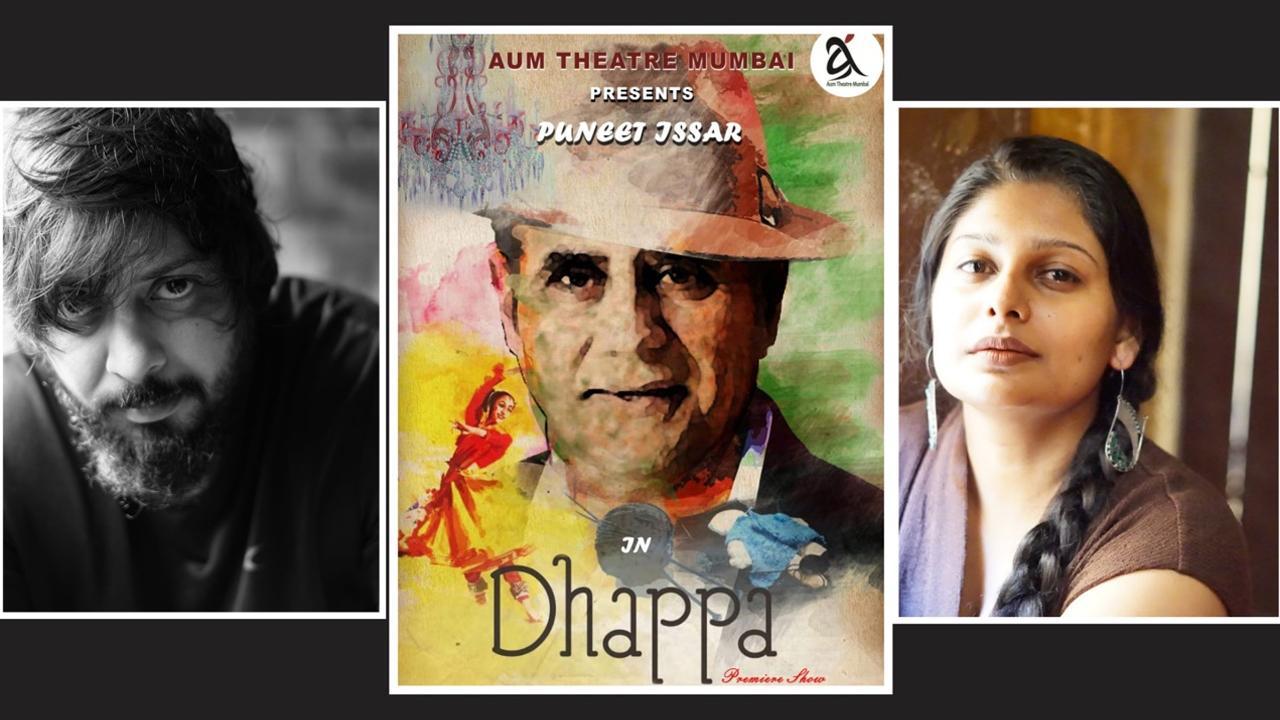 We caught up with the super talented Puneet Issar, who is forever embedded in our minds as the great Duryodhan of B. R. Chopra’s TV series Mahabharat, and Aum Theatre Mumbai’s Akshay Mishra (writer & director) and Sharon Chandra (actress).

Akshay, how did you conceive this play?

Akshay: I was always fascinated by the 1950s golden era. The performance of actors, hard-hitting themes, simple relationships, and fascinating music and dance always attracted me to write about such genres. Today, I look at our films and plays and just wonder how would it be if I was transported to the 1950s and worked with icons like Guru Dutt, Balraj Sahni, Satyajit Ray, and many more. DHAPPA was my opportunity to try and recreate a time that I have never experienced but yearned to be a part of. I am glad that Puneet sir loved my script and was instantly swayed to be a part of DHAPPA.

Puneet sir, how was your experience working with the Aum Theatre Mumbai team?

Puneet sir: It was great! When Akshay narrated the script, I promptly said yes! It is a role that I had never explored before but always thought of doing. The story was so compelling that I felt a monologue called ‘Patthar ke Pankh’ should be a part of this play. This monologue was written by my father in the 1970s and it is eerie that this monologue is like that one piece that was missing from the Dhappa puzzle! (Beaming…) The role of Shyam is so intriguing and adventurous that I could have never said no. I want my audience to see my team’s work. The magnificent set, a fantastic script, melodious songs and music, and dance will captivate the audience. The premiere should not be missed!

Sharon, we hear that you are from Fiji and have a corporate job! How is India treating you and what can you say about your performance?

Sharon: I can say without a doubt that India is a treat! The country is blessed with such a diverse culture and helpful people that it motivates foreigners to come to India in search of this bliss. Yes, I do hold a corporate job at Deutsche Bank but I must say that my workplace is extremely supportive in maintaining a perfect work-life balance. I never thought in my wildest dreams that I would get the opportunity to work with Puneet sir. He is perfect! I just love his work ethic and dedication to the craft. He is an inspiration to us and always ensures to guide us. I am happy that I represent my country Fiji and hopefully motivate people from my country to come to India and live the adventurous life of an artist!

Akshay, what can the audience look for in DHAPPA?

Akshay: Something that is very essential for this generation! Emotions and empathy in family life and mutual respect, and admiration for artists and the craft. DHAPPA is a very meaningful and realistic play where one can relate to the sacrifices, repentance, passion, and perseverance enacted by the actors on stage. From a creative perspective, I think the digital and live music takes the cake! I had re-watched some old movies and was mesmerized by their music. Movies from the 1950s and 60s are never a one-time watch. One always looks up to these icons who have worked tirelessly and given us such invaluable gems. We are forever indebted to their work which gives us a glimpse of a beautiful era gone by. I researched a lot on the types of thumris that were played during that era and endeavored to write thumris that resonated with my audience. I was inspired by the ones sung by Shamshad Begum, Begum Akhtar, Siddheshwari Devi, and many more and tried to recreate a little sprinkle of that golden era that these maestros ruled in. I can’t wait for the audience to hear these beautiful pieces of music.

Dhappa is produced by Akshay Mishra and Sharon Chandra and will premiere on Saturday, June 18th at 7 PM at St. Andrews Auditorium, Bandra. Tickets are available on Bookmyshow.