A witty attempt to mirror the gender gap in the country. 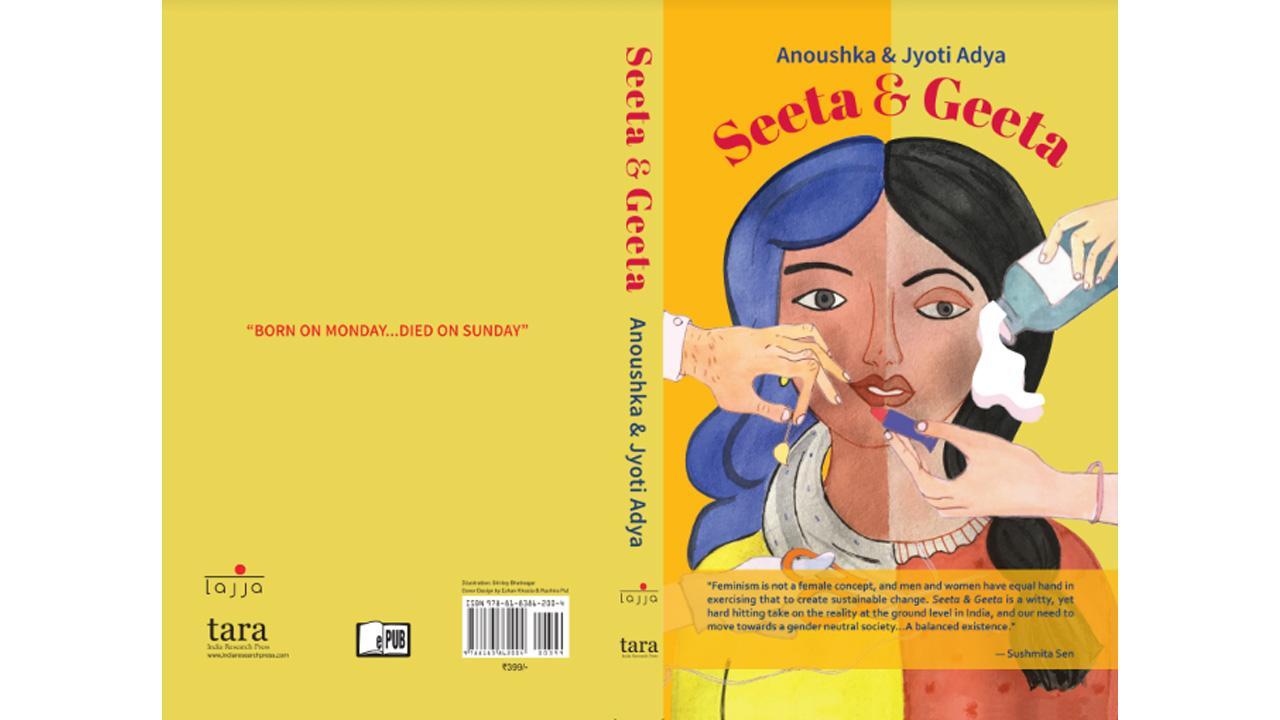 Full of wit and delicious observations, this book captures the life of the modern Indian woman.


Written along the lines of the popular platform Lajja Diaries, Anoushka and Jyoti's book Seeta & Geeta is a witty and satirical take on all thing’s women empowerment. This book captures the life of the modern Indian woman - a woman who works hard, studies hard and builds her own life but still has to put on fairness creams, has absolutely no say while choosing her life partner and has to listen to her Mummyji and her Mausis and Bhuas who somehow manage to keep her confused.

Seeta & Geeta is a satirical take on the unique desi feminist issues that are still prevalent in India and shows the dichotomy that exists in our Society even today. The book highlights the two faces of the modern Indian woman, and the daily small and big battles that they endure.

It is a novel that displays the inequalities Indian women continue to face at the ground level, but from an off-beat perspective. The stories deal with various issues, most of which have been declared unconstitutional, yet continue to exist and thrive, such as child marriage/gauna, dowry, female infanticide, love jihad, acid attacks, dark skin bias, body shaming and virginity rituals.

Award-winning serial entrepreneur Anoushka Adya and renowned social activist Jyoti Adya decided to take an offbeat viewpoint on the whole women empowerment debate to show just how ridiculous some of the customs and societal attitudes are.

Pick up this book only if you are looking for something to make you laugh hard and leave you thinking just how ironic our societal attitude gets.

“We have tried to highlight the unique desi feminist issues that are still prevalent in India and some of these customs are practiced only in India. These customs have been passed down by our ancestral forefathers and have definitely become irrelevant in today’s age and landscape”, says author Jyoti Adya, Director, Lajja Foundation.

“The book is an attempt to show the dichotomy that exists, and the two faces of the modern Indian woman - Seeta & Geeta. The overarching concept of Seeta depicts the docile Indian girl who accepts everything that Society throws at her and blindly follows it, while Geeta depicts the new age Indian girl who refuses to be a doormat, questions illogical age-old customs, and embraces only what makes sense to her”, says Anoushka Adya, Founder and Director, Lajja Foundation.

This book is an attempt to be the voice of millions of Indian women in India and across the globe.

At the ground level, India deals with the peculiarities of what the authors call the “desi feminist’ challenge. The challenge of equal pay or countering sexism at the workplace comes much later. Women in India are still struggling to have their basic freedoms ensured at home and in society. Surprisingly, some of the desi issues are unique only to India like the acid attacks, love jihad struggles and some other rituals.

Lajja Diaries is a platform that encourages discourse on Women’s Rights in India and across the world. Started in 2014, Lajja Foundation is an award-winning NGO that has connected thousands of women over the years, created a community and has won several awards including Community Developer of the Year by IIT Delhi and an award from Mr Akshay Kumar for their slum menstrual hygiene camps.

Lajja started as an online platform, to felicitate the gender discourse on Women Rights in India, and went viral soon after. Lajja Diaries has a community of over 75,000 women online and the foundation collaborates with various NGOs across India: to create a strong network to move fast from awareness to counsel, and further extending support.

Lajja envisages a society, where women, irrespective of caste, class and religion, enjoy full citizenship, earn a livelihood with dignity and generate wealth and value for all.

Team Lajja has so far managed to create a strong community of women across India and has helped thousands of Indian women at the ground level. Lajja community is an ecosystem that inspires each other to build a more gender equal society in India. Team Lajja supports women’s human rights in India and runs various urban as well as rural projects on a case-to-case basis, taking one stride at a time. Over the years, it has collected strong case studies of the lives– that have been impacted as a result of the efforts put in by the team.

Lajja is working towards realizing a paradigm shift of perspectives by encouraging women to stop pushing women’s issues in India under the rug and instead to openly acknowledge them.

Anoushka is an award-winning entrepreneur, a marketer, and a TEDx Speaker, who believes that there is no substitute to hard work. She is also the force behind Lajja Diaries, Di-Mentions Studio, an award-winning digital marketing agency; and Grow Labs. Jyoti Adya is the Founding Member of Lajja Diaries and Executive Director of the Lajja Foundation, has more than 10 years of experience in the field of social work.

Anoushka and Jyoti have managed to craft satirical stories and funny fables about women empowerment and desi challenges that Indian women face. Although many books have been written about gender inequality, this one is an absolutely unique approach and lens. It stands out as an original voice to the problems that we encounter and witness all around us daily.

The stories are an attempt by the authors to bring about desired changes at the micro-levels in the long term by spreading awareness. The book is aimed at young readers and the author duo have tried to impact their mindset, albeit in a funny manner whereby most would only realize much later.

This is the generation that will drive the changes in the future and the book comes out at the right time to make them aware of the challenges.

The book has deliberately been kept very realistic with no preaching at any point, as the author duo feel that there is enough of that content out there. These are endearing and funny tales of common Indian women who sometimes unknowingly and sometimes willingly become warriors who deal with the situations that they have been presented with and overcome the hurdles in the best way they find possible. They are heroes in their life and space, and that's what matters. Because every girl/woman matters, and every story counts! They represent girls/women who are present in every family and every nook and corner of India.

The book is an attempt to bring in long term perceptual change that the author duo feels women and men need to drive together. The change has to begin at the family unit level from a young age.

The book is a hilarious and emotional read along with an underlying social issue. Seeta & Geeta is now available in various online and offline stores for the readers who love to read.

Next Story : Value4Brand gears up for the ReLaunch