Originating from the story by Wolfman and Perez in 1980, Starfire has so far received a lot of love and following. 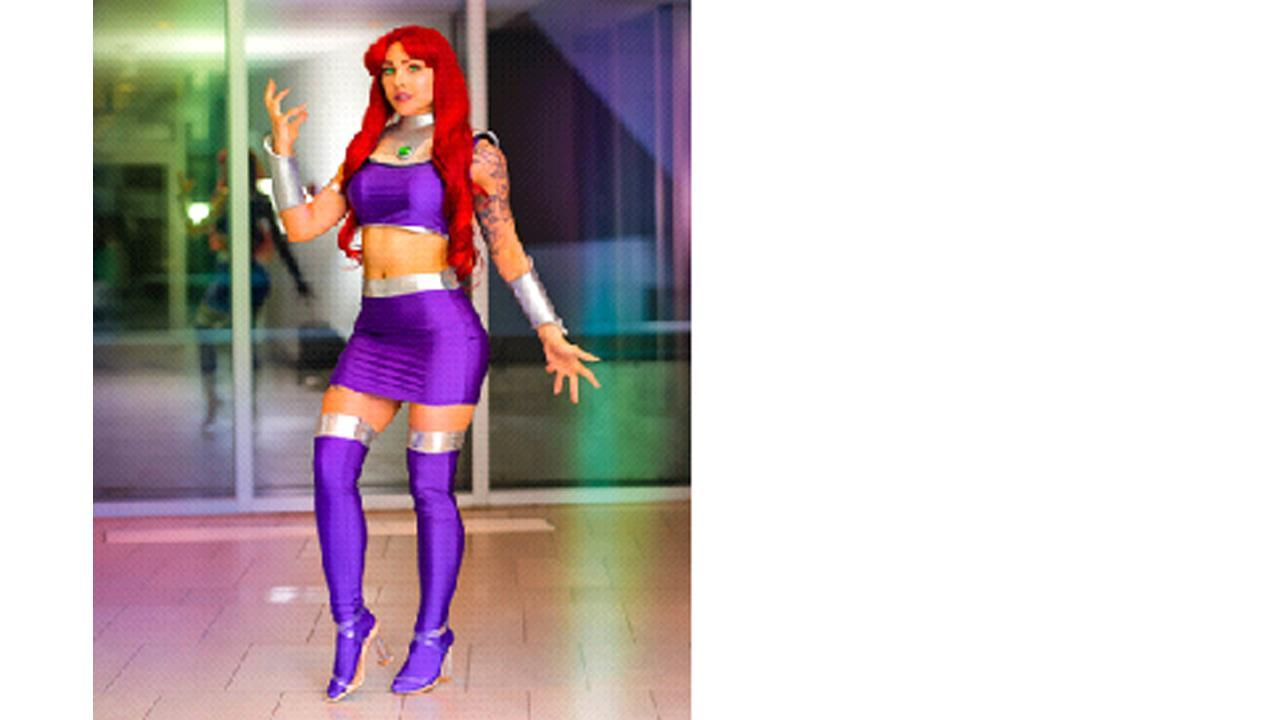 This alien princess from the planet Tamaran is one of the core members of the Teen Titans and also the most popular character. Unlike Earthlings, Starfire's skin is orange, her eyes are green with no pupils, and she has long hair that looks like flame.

It is the Teen Titans cartoon series that let her catapult into more fame, a cartoon that was nominated for three Annie Awards and a Motion Picture Sound Editors Award. From then on, Starfire has become the childhood goddess of many people. And as the initial audiences growing up, their children are also fall in love with this classic character. According to website survey, Starfire has become the first choice for Halloween cosplay both young and old. There are so many people have cosplay Starfire, but some of them have left a strong impression on us, which is so memorable that will not fade with time. Today, we have compiled a ranking of the best 10 Starfire cosplayers who are in Starfire Costume in different style, which is a top 10 list that is worth your time! 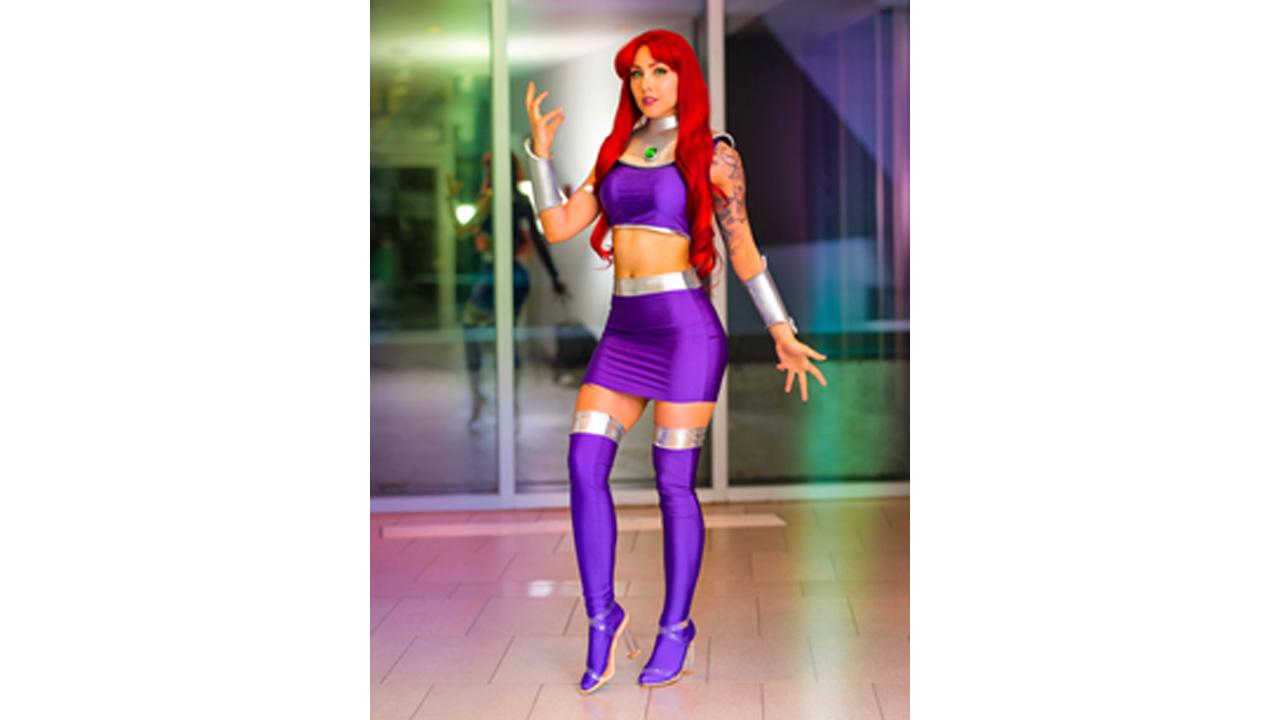 Luxlo is a cyber star on Twitter, sharing her cosplay works every month and has 934.9K followers so far. Her role play can immediately recall the Starfire from Teen Titans, a classic version. The Raven and Starfire costume will be good enough for her.This is undoubtedly what people think Starfire will look like when she grows up, wearing a purple tight suit with a confident smile and the emerald gem on her silver armor still shining brightly. From the photography skills, the colorful glass-like filter she used has made the whole look more mesmerized while carrying an air of mystery. 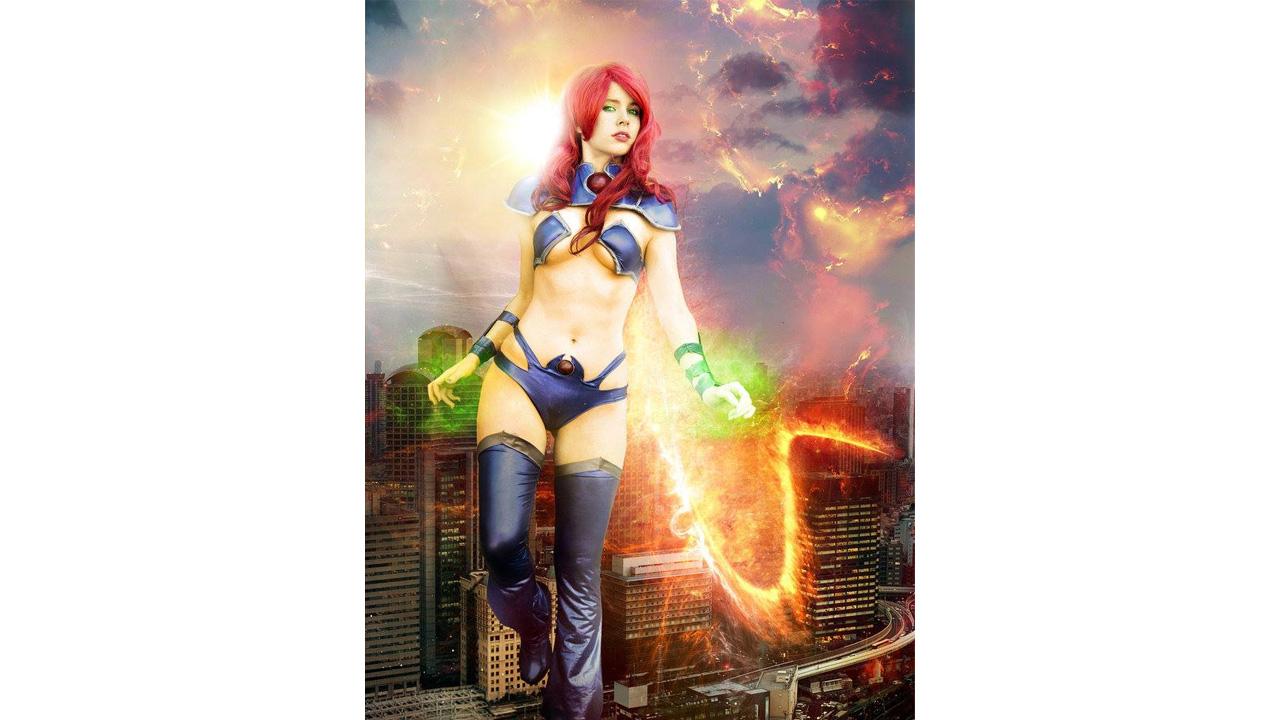 Florencia Sofen, whose original name is Jillian, is a certified cosplayer and photographer with ten years of experience in the cosplay industry. She brings us a sexy version of the new Starfire that appeared in DC Comics in 2011. This New 52 Starfire is like the embodiment of flame, with a lightning speed to move. This cosplay made Florencia Sofen the winner at that year's Comic-Con and then officially opened her cosplay career. 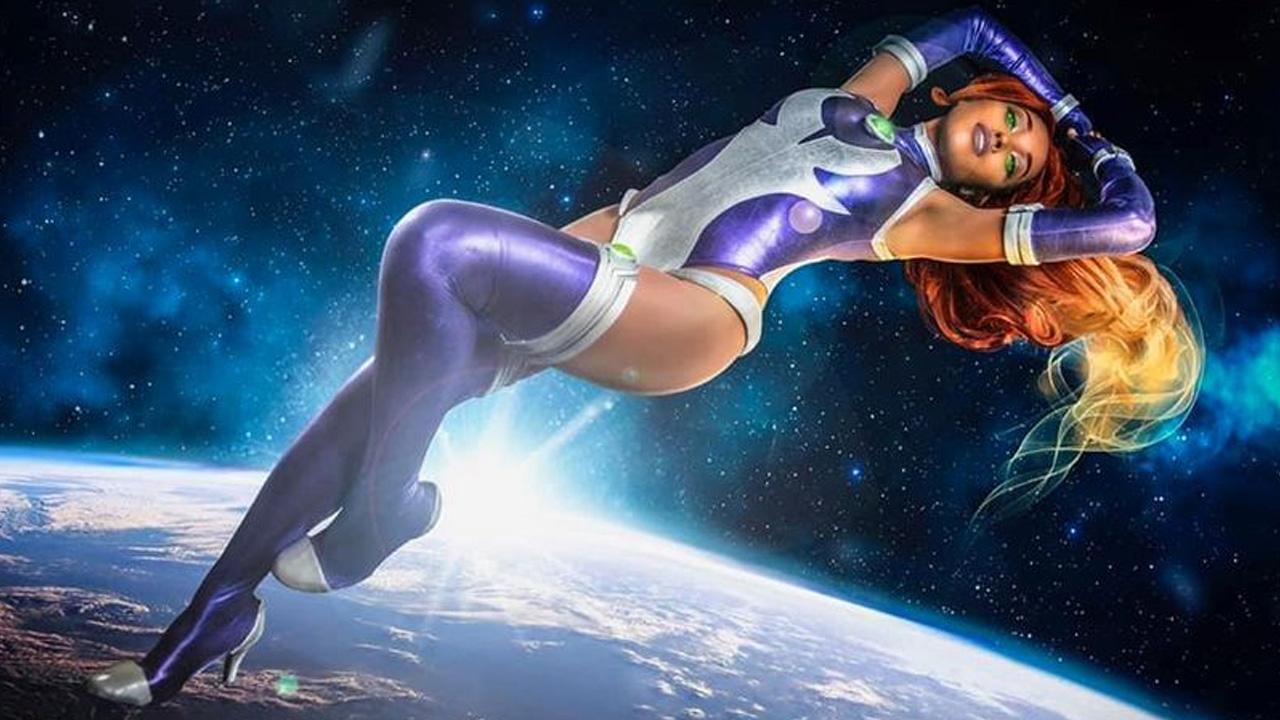 It is well known that Starfire was born and raised on the distant planet Tamaran as an alien princess before she joined the Teen Titans. Before she came to Earth, we believe she used to fly freely in the universe just as the picture Cutiepiesensei cosplay showed. Cutiepiesensei is a POC cosplayer and is proud of her skin color. She has taken her cosplays a step further and create some memorable outer space scenes in her Teen Titans Starfire cosplay. Frankly speaking, if she wants to create a fan-made series about Starfire in the future, we would love to see it! 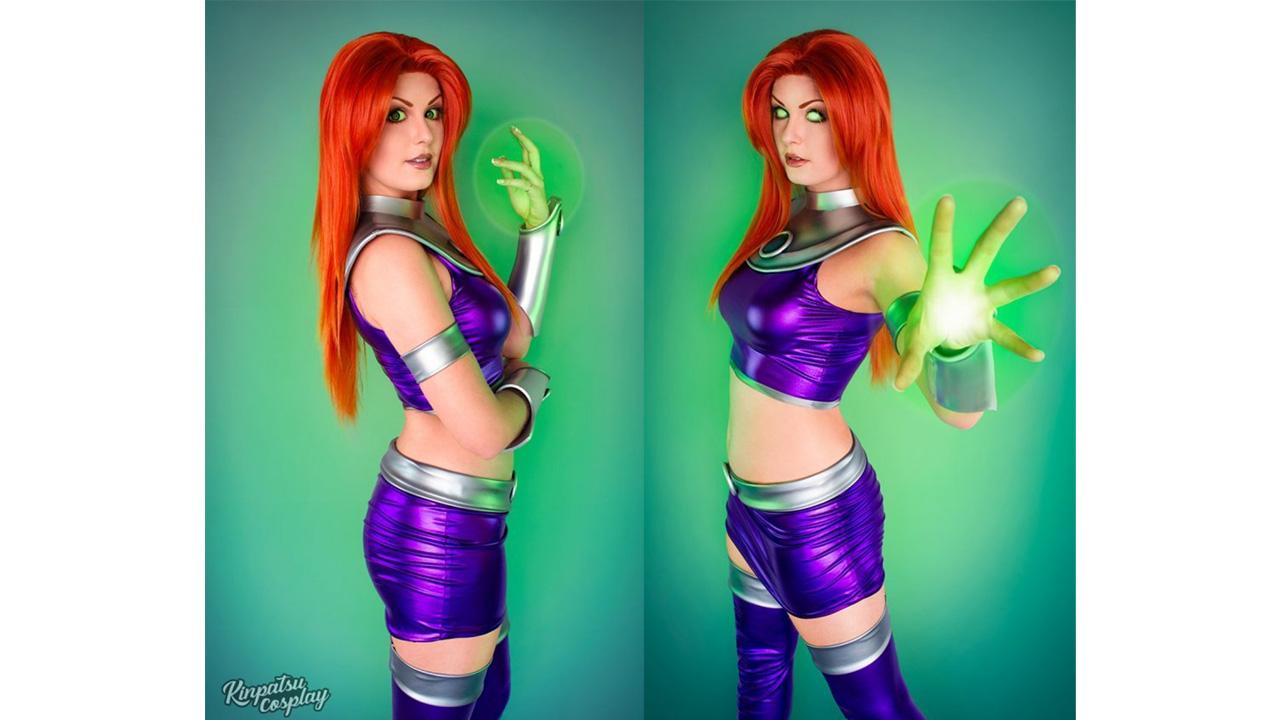 Stretchy purple shimmery shorts and a long-sleeved tank in the same material were the chief elements in dressing up Starfire of 2003 version, and that's exactly what Kinpatsucosplay did. In the meantime, her bright green sclera lenses are also a major feature that makes her cosplay as if she has the same luminous effect that Starfire has when she's using her powers. Kinpatsucosplay has been making her own costumes and then dresses up for many years. This girl from Canada sells her handcrafting costumes and props through YouTube channel, which is a way you can get quality Starfire costume. 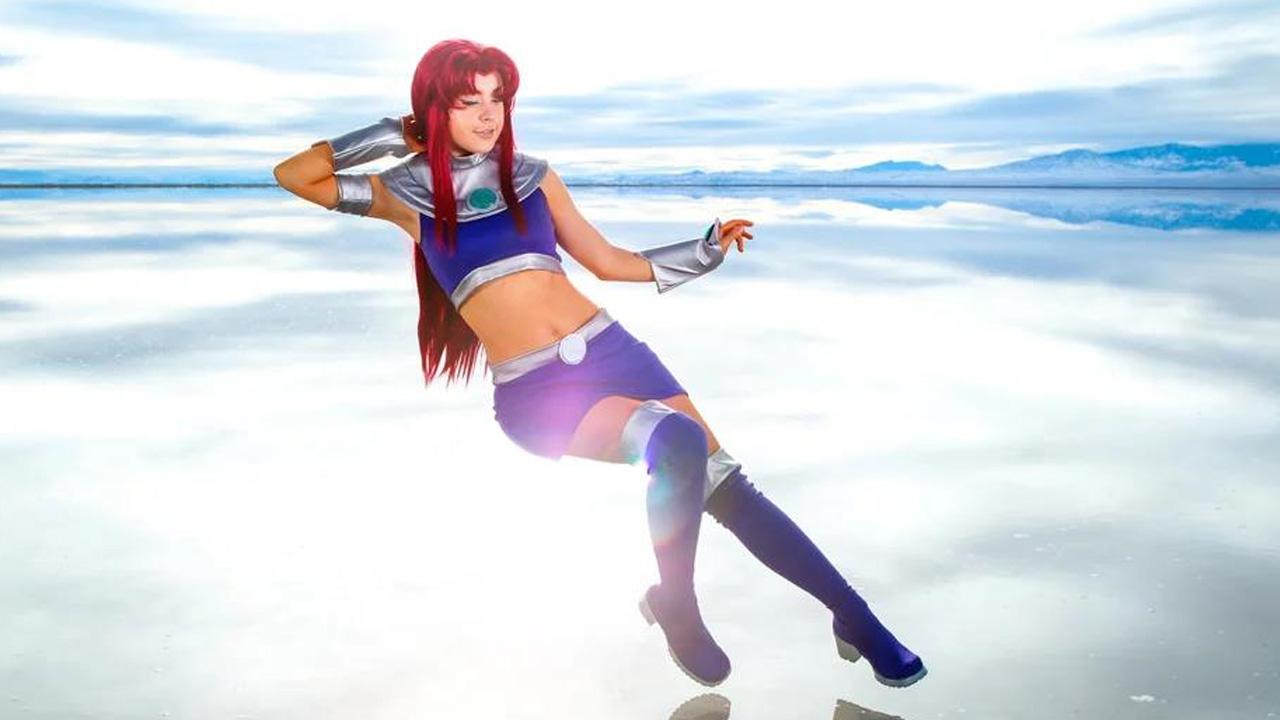 This Starfire cosplay from Raineemery is from her teenage years, when she had learned to make costumes independently, although the style is not too complicated. Her craftsmanship is clear, concise, but absolutely Starfire. Just like the characterization of Starfire, her cosplay is also an alien who is talented in flying. The effect of this photo editing is stunning and looks distinctly extraterrestrial. Now, Raineemery has got her degree in Fashion Design, we are sure she will continue to design more exquisite costumes. 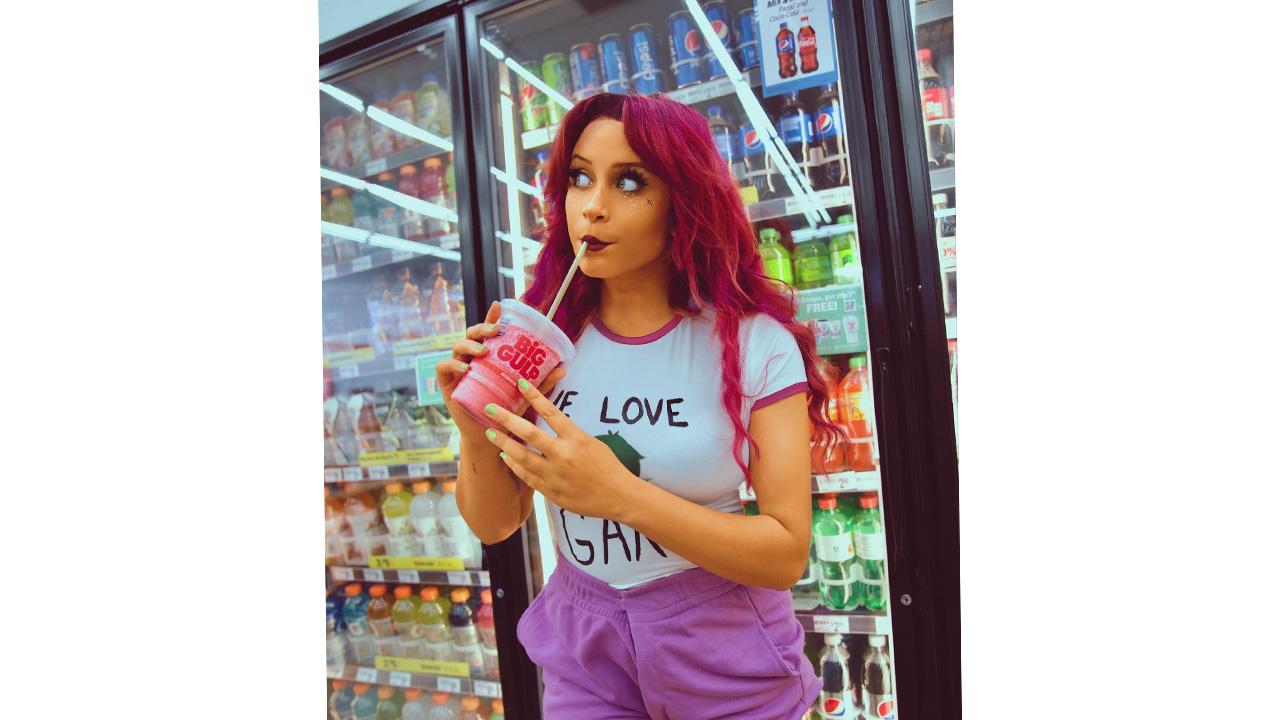 Caoimhe has always adhered to the cosplay idea of showing the positive side, which has given her 108K fans on instagram. Lately, she has shared this casual Starfire look with "We love Gar" written on the top in her own brush. This look is inspired by the 80s Starfire, a certain episode in the original comic. She perfectly brings the costume to life, as her costume is ripped right from the comics with her short-sleeved top, rose-red long hair and purple shorts.

Caoimhe says she and Starfire have had some similar experiences, and most importantly, they are both very positive. Despite having a tragic past, Starfire remains optimistic, which allows her not be destroyed by negative feelings on a strange planet. And this is exactly what Caoimhe's cosplay conveys to us, this alien princess has adapted to life on Earth and is no longer the girl who could not distinguish between cotton candy and cotton balls. 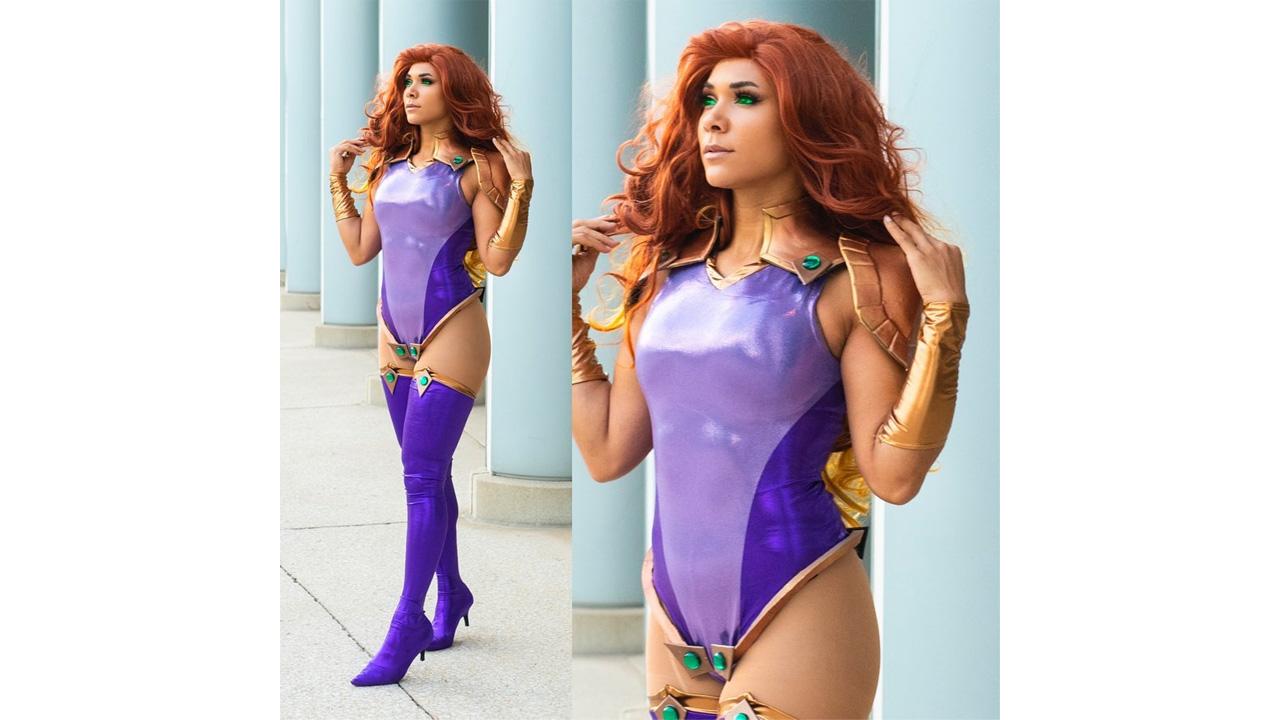 Due to Anna Diop’s Starfire looks in the TV series were disliked by many, some fans will improve her looks and ultimately design much admirable fan art. Becofhearts’s cosplay is exactly design by herself from the battle suit of Starfire in TV. She is wearing a tight purple bodycon and the same color knee high boots. We have to admit that Starfire’s traditional purple and gold are well represented in this cosplay, especially in combination with her arresting green eyes, lightly tanned skin, and long flowing orange hair. 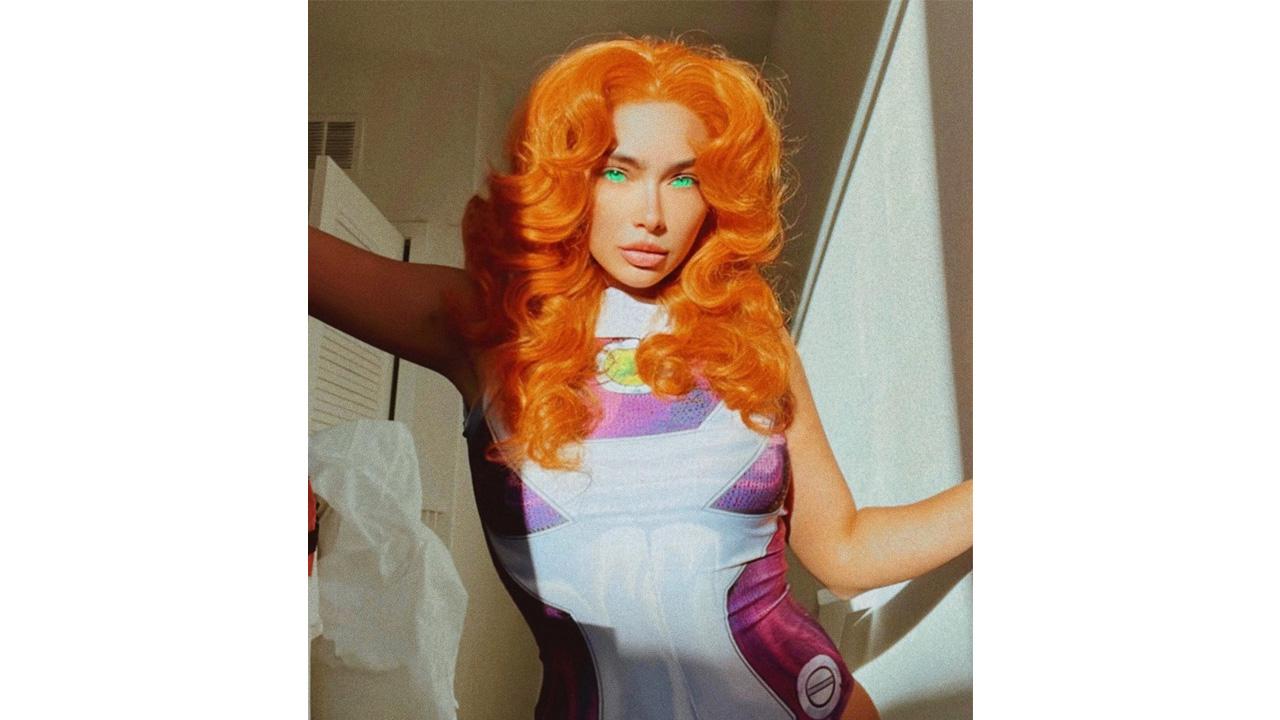 Caitlin Christine is a skillful Marvel and DC female superhero cosplay enthusiast, best known for cosplaying multiple versions of Spider-Man. However, what we highly recommend today is her Starfire cosplay from the 2017 comic version. This cosplay has many fans praising her as the master of disguise because she looks truly like Starfire from the comic reborn into reality. In addition to trying out many of the classic cosplay of Starfire . Besides, she is also enjoys games and fitness. You can easily see from her Starfire cosplay that she maintains a fit body, perfect for wearing all types of jumpsuit. 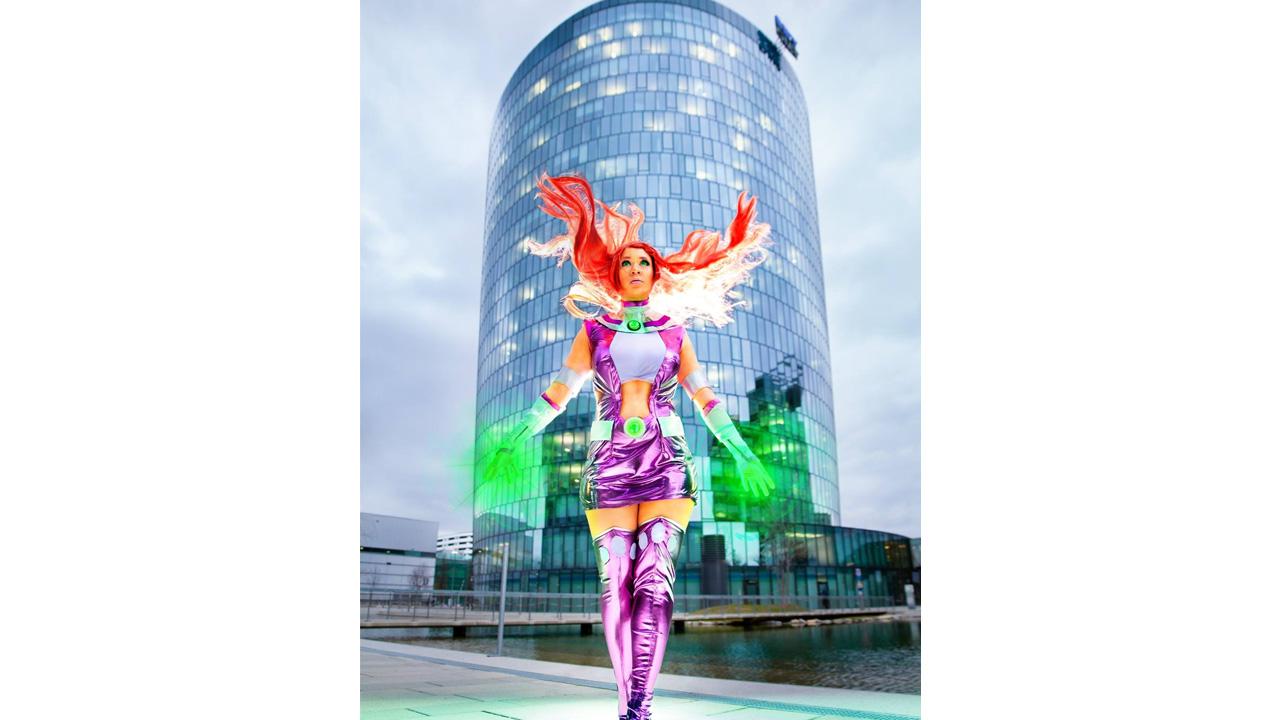 As a superhero, Starfire's superpower is the ability to release energy, and once hit by the energy, things will melt or disappear completely. Kitakichan's cosplay perfectly presents the appearance of Starfire before the battle, even the hair is lifted by this superpower. Kitakichan is a cosplay team, composed of Kitty and Itakichan, often together out of many comic conventions. This Starfire cosplay was selfmade and worn by Itakichan at Vienna Comic Con 2015. The purple high-heeled boots she wore were also of her own design, which made her legs look longer. 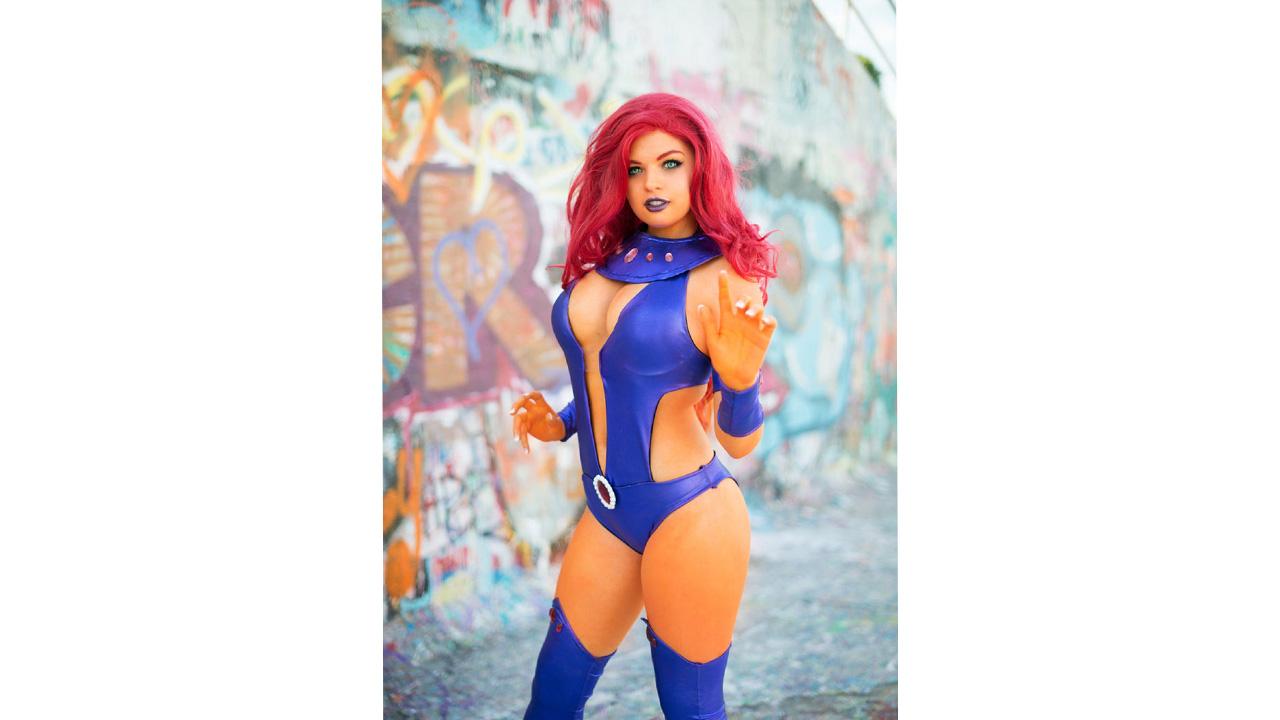 Shinigami-X’s cosplay is also inspired by the Starfire from the New Teen Titans in 1980. The look earned Starfire a spot on Comic Buyer's Guide's "100 Sexiest Women in Comics" list at #20. In order to be closer to Starfire, Shinigami-X has painted her body with orange cosplay foundation, which is the most successful part of the whole look. Purple costume, bright red hair, green eyes and orange skin, this is what we remember Starfire should look like. What's more, Shinigami-X, like Starfire, doesn't show her off in titillating ways because she is attractive in her own right.

Instead of losing her kindness and optimism, Starfire, who had experienced hardship, picked herself up and took up the responsibility of maintaining peace. This is why there have always been people who love Starfire and want to cosplay her and follow in her footsteps as heading for a brighter future.

Making this ranking of the best Starfire cosplayers is not easy, because there are so many outstanding cosplay works. Have you found your favorite Starfire cosplayer? If you think someone else is better, please share with us in the comments.

Next Story : "Passion must be carried forward by honesty, patience and dedication to excellence." -Shital Keshari, Artist