Vishal Yashwant Borase was felicitated with the “Most Popular Language Teacher in Nashik” award at the National Fame Awards 2022 organised by Brands Impact. 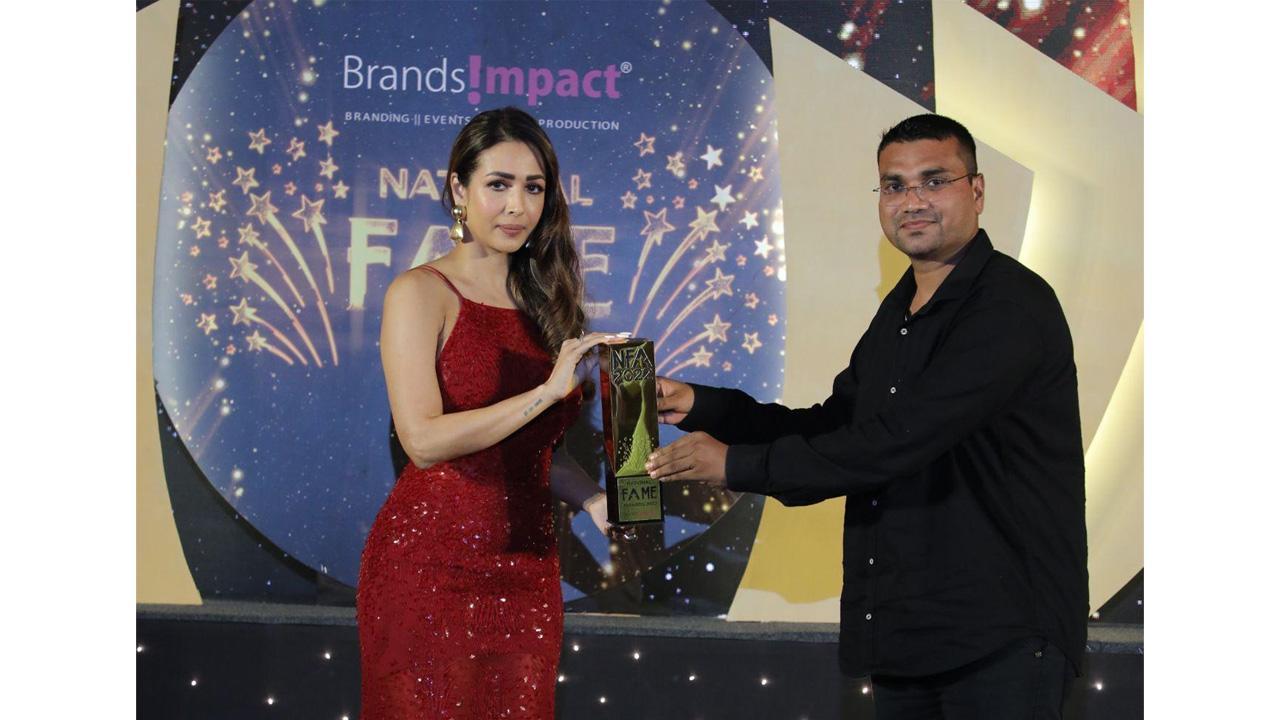 Vishal Yashwant Borase was felicitated with the “Most Popular Language Teacher in Nashik” award at the National Fame Awards 2022 organised by Brands Impact. The award was presented to Mr. Borase by renowned Bollywood actress Malaika Arora at the dazzling ceremony recently held at one of the most opulent hotels Vivanta New Delhi, Dwarka.

The National Fame Award is organised by one of the leading branding companies in the country, Brands Impact. This was the first edition of the National Fame Awards, and the organisers did a remarkable job at recognizing the efforts of individuals and companies that have managed to fight the odds and make a recognizable name for themselves in the growing industry.

The award ceremony included many renowned awardees who have earned a great deal of reputation in their respective industries. Some of the names in the list of awardees include Gauahar Khan & Zaid Darbar (Most Loved Celebrity Couple of the Year), Erica Fernandes (Most Stylish Lead Actor on Indian Television (Female), Karan Mehra (Most Loved Lead Actor on Indian Television (Male), Roshni Bhatia (Most Popular Fashion Blogger of the Year).

Mr. Vishal Yashwant Borase is the Assistant Teacher at New Primary  School Fort Malegaon Dist Nashik, Maharashtra. He has been a fantastic teacher to the school’s students since 2010 and has offered a total of 8 years of non-salaried service. However, this never meant that he was putting any less effort into educating his students with innovative approaches that always stuck the right notes with his students.

Despite all the issues, he managed not just to survive but even thrive. Like every other teacher in the country, even Mr. Vishal had to deal with many challenges during the COVID pandemic. But thanks to his commitment and ingenuity, he successfully implemented all technical aspects such as e-exam, e-competition, and e-result. His work during this period also earned him the selection as one of the top 15 entrepreneurial teachers in Maharashtra.

In the past, Mr. Vishal has earned many other awards, including the Pride of Indian Education award,  National Innovation awards from Old Book Generation, Diamond Festival Tree Plantation, and Education. Besides that, he also earned an award for Best Coordinator from Knowledge Hour. Furthermore, Mr. Vishal also has other accolades such as Paradise Active Teacher, Kino Shiksha Gaurav at the hands of Late Sindhutai Sapkal, Mother of Orphans, Technology Friendly Teacher through Malegaon Education Society, a long list of CK Innovative Teacher Fellowship Selection, State Level Merit Honours has been attached to his career.

The renowned and celebrated individual was also the first Guruji from a private school to enter the Sakal Shabash Guruji article. But that is not all that defines the personality and achievements of Mr. Vishal, as he has now taken on the task of solving problems of teachers as a State President of the State Private Teachers Association in 2018 and also State Organiser in 2019. Mr. Vishal also started filling up applications for minority students for free over the last five years.

He has also showcased his competence by writing ten science books for school children. One of his best-known science books is Fun in Science, which makes science more comprehensible for students. But other than that, his books How to Find Innovation and Heroine Science are also much loved by students from all over the country. That’s not all. He has also been playing the role of a facilitator in the Teacher Education Council for the past two years.

In the coming times, many more strides in this direction can be expected from him.