Yeh Hai Bakrapur is a quirky, social satire where the main protagonist is a goat called Shahrukh. Shahrukh is the only hope in this debt-ridden family that lives in a Muslim-dominated area 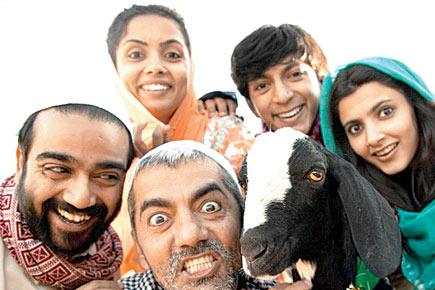 Yeh Hai Bakrapur is a quirky, social satire where the main protagonist is a goat called Shahrukh. Shahrukh is the only hope in this debt-ridden family that lives in a Muslim-dominated area. The young boy (Shameem Khan) of the family loves the goat and is traumatised by the thought of it being sold. But the greedy, nagging mother, the docile father and a scheming uncle want it to be sold as soon as possible in a bid to pay off their debt.

Yeh Hai Bakrapur is a brave attempt at social satire

It is the local barber’s son (Anshuman Jha) who, while relentlessly wooing the daughter of the family, comes up with an ingenious idea of saving the goat from being sold.  What he and the kid didn’t bargain for, of course, is that this little mischief of theirs would catapult the goat into an enviable position and make it a moneymaking machine for the family. And soon enough, it also becomes the reason behind simmering tensions between two communities in the village.

Janki Vishwanathan’s debut film in Hindi begins pretty interestingly as she carefully lays down the setting of a family and area which seems riddled with poverty and depravity. However, she manages to keep the mood upbeat as the script is filled with dry and matter-of-fact everyday humour. The desperation of the characters is believable, even as the story exposes how easy it is to manipulate people’s religious sentiments and how opportunists spring up with creative ideas when they sniff a possibility of making easy moolah.

The film, no doubt, manages to keep you entertained throughout, sometimes even raising a few chuckles. But the storyline and certain situations seem too hackneyed. The climax seemed too hurried as if the scriptwriter (Janki Vishwanathan) was suddenly not sure how to tie up its loose ends. Each of the actors fits in very well and delivers good performances. In fact, Suruchi Aulakh, who plays the terror of a mother, and Jha are fantastic. This brave attempt at social satire — with no stars but just a goat named after a superstar — is worth lauding. Watch this film at least once.