Radhe: Is this Jackie Shroff's look from Salman Khan starrer?

While Salman Khan and team has managed to keep most of the film's details under wraps, we managed to get hold of a behind-the-scene picture of Jackie Shroff from the sets of Radhe. 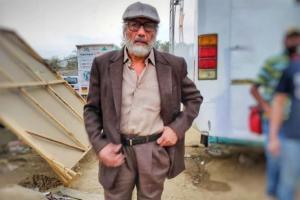 
Radhe: Your Most Wanted Bhai has been making news for a long time. The movie reunites the Bharat trio Salman Khan, Disha Patani and Jackie Shroff. Fans are eagerly waiting for Salman to don the cops' uniform again after Chulbul Pandey.

While Salman and the team have managed to keep most of the film's details under wraps, we managed to get hold of a behind-the-scenes picture of Jackie Shroff from the sets of Radhe. In the picture, Jackie looks unrecognizable donning a fake white beard with nerdy glasses and a cap on his head. The veteran actor is seen wearing a beige coloured shirt, brown coloured jacket, and pants. We aren't sure if this is Jackie's look from the film, but the look certainly raises some eyebrows. The picture was shared by the fan club of Salman. Take a look:

For the uninitiated, Radhe is directed by Prabhudheva and is the official remake of the Korean potboiler, The Outlaws. After Wanted and Dabangg 3, this is Prabhudeva and Khan's third film together. Khan's record on EID has been unshaken and unprecedented.

We have learned that Salman's 20-minute climax of Radhe designed as a VFX-heavy sequence, mounted on a budget of Rs 7.5 crore. Speaking exclusively to mid-day, a source revealed, "Shooting in chroma key is an expensive process that only big-ticket filmmakers can afford. Baahubali [2015] and its sequel [2017] were two of the recent films that employed technology. While the process of shooting a video on a blue or green background hardly burns a hole in the pocket, the lighting required for chroma is expensive. Then comes the VFX part, where the background is removed digitally and replaced with the background of one's choice."

It has been heard that the final scenes of Radhe are set in Dubai. "While the movie has been shot across Delhi, Kolkata, Jaipur, and Lucknow, the high-octane action piece was filmed in a studio. Now, the VFX team is at work lending it the necessary background. Moreover, the 20-minute sequence — visualised by director Prabhudeva — is VFX-laden as the two actors battle it out in a combat scene. When Prabhudeva and Salman had discussed the scene with the VFX team, they were told that the cost would run into over Rs 7 crore. However, Salman greenlit it as he believes that the climax of the cop caper has the potential to be much talked-about."

Starring Salman Khan, Randeep Hooda, Jackie Shroff, Disha Patani, and Arjun Kanungo, the film is all set to clash at the box-office with Akshay Kumar and Kiara Advani's Laxmmi Bomb. This is possibly one of the biggest clashes in recent times and we cannot wait to see this battle unfold on May 22, 2020!

Next Story : SRK on Swades co-actor's death: Kishori Amma will be sorely missed