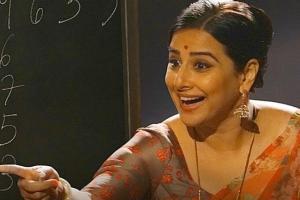 
There are just a few days more to go until the Amazon Prime Video members in India and more than 200 countries and territories worldwide can watch the highly anticipated biopic-drama film 'Shakuntala Devi'! Actress Vidya Balan will astonish the audience by playing the lead role of Shakuntala Devi and taking them through the journey of the brilliant mathematician who was also known as 'the human-computer'.

Biopics often require the lead actors to really connect with the protagonist of the film and see through their eyes. The same was the case with Aamir Khan who played the character of the 57 years old father and the trainer 'Mahavir Singh Phogat' in the sports biographical film 'Dangal'. Even, in the biographical drama film 'Super 30', Hrithik Roshan immersed himself into the character of the Bihari mathematics educator Anand Kumar, adhering to a different culture.

Similarly, to play the character with natural elegance Vidya Balan had to break the mold to fit into the shoes of Shakuntala Devi who was a mother to a grown-up daughter and was also a genius who astounded the world with her ability to solve complex math problems in mere seconds in her mind.

Next Story : Here's why Vidya Balan is always chirpy and happy in Shakuntala Devi