The film has some stunning imagery but most of the action feels random and incoherent. The narrative is overlong in its desire to include every embellishment possible. 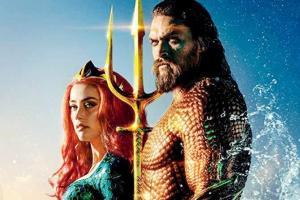 Aquaman - a largely underwater flight of fancy, amounts to a herculean attempt by custodian Warner Bros. to right its wonky DC cinematic universe and it's success is moderate at best. A large part of the credit should necessarily go to the charismatic Jason Momoa( ex Baybatch ) who got promoted to this leading role after showing face in 2016's Batman v. Superman : Dawn of Justice and Justice League.

This superhero saga is mostly origin story myth building through fantasy VFX, so don't expect real characters, adherence to the laws of physics or conversations beyond the monosyllabic. In this film, anything goes - even a ring(chasm) of fire in the midst of a deep blue sea and an ocean of wealth under the Saharan desert. Reality rarely pokes its ugly head into this gamey underwater universe that heralds the dawn of a new King Arthur(Momoa), a half-breed(Human-Atlantean mix) who is expected to prove his worth against the might of his firmly ensconced younger half-brother Orm(Patrick Wilson).

Aquaman's tall-tale is embellished in Royal shenanigans, incorporates themes of environment pollution and engineers a war between the water world and the land world under the pretext of righting the wrongs of a selfish civilization. The attempt here is to create an underwater 'Lord of the Rings' but without the majesty, profundity or significance of that telling.

Making an oblique nod to 'Splash,' the film opens with Queen Atlanna (Nicole Kidman), fleeing Atlantis, getting washed ashore at Amnesty Bay, Massachusetts, meeting solitary lighthouse keeper (Temuera Morrison), falling in love and subsequently birthing the said, Arthur and then going right back to Atlantis- the underwater city, in order to save the lives of her loved ones. Punctuating the drama is Orm's attempts to amalgamate the seven wondrous oceanic kingdoms and become undisputed Ocean master. Vulko (Willem Dafoe), Princess Mera(Amber Heard) and to a lesser extent King Nereus (Dolph Lundgren) put a spoke in his wheel, so-to-speak.

The film has some stunning imagery but most of the action feels random and incoherent. The narrative is overlong in its desire to include every embellishment possible. There are a few engaging moments but the in-between humdrum is pretty much taxing. Weighed down by its watery excesses, the narrative feels terribly labored and over-done. James Wan ( with his Horror oeuvre) was probably not the right man for this DC recreation. He makes this watery epic a kitschy showboat instead of lending it acuity and memorability. This is a story of excess but even so, it's hard to resist the charms of the lead actors, their outlandish costumes and some wondrous aqua sequences.

Next Story : Emily Blunt up for Mary Poppins Returns sequel