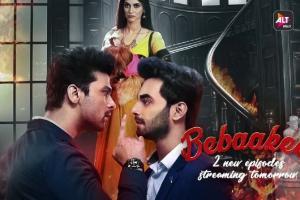 
The wait is finally over as the much-anticipated romantic drama Bebaakee from the house of ALTBalaji, and ZEE5 Club has finally released. The recently launched show that stars Kushal Tandon, ShivJyoti Rajput, and Karan Jotwani is already garnering raving reviews by critics and fans alike. With viewers hooked to their screens, ALTBalaji takes the engagement and buzz created by the show to the next level by having an exclusive Bebaakee filter on Instagram. Centred around the popular party game 'Never have I ever', it's not just fans who are making the most of the filter, but some of the biggest ALTBalaji actors as well can't seem to get enough of it.

Some of these celebrities include Heli Daruwala, who lets her fans know if she's ever stalked a crush. Hina Khan revealed to her followers if she has a tattoo of her partner's name as well as the likes of Mrunal Thakur, Jay Bhanushali, Anita Hassanandani, Suchitra Pillai answer different confessions. The trend didn't leave the lead actors Kushal Tandon, Karan Jotwani and Shiv Jyoti Rajput, who seem to be having a blast. If you want to know whether Kushal Tandon has ever been cheated in a relationship, the answer awaits you on Instagram.

Last, but certainly not the least, the fervour of the filter couldn't even spare content czarina Ekta Kapoor who gave her followers a sneak peek into her fun life. These candid confessions by the stars have sure started the week on a good note, and you can make it better, by streaming Bebaakee on the ALTBalaji and ZEE5 club app.

Experience the passion of Sufiyaan, the strength and love of Kainaat, and the enduring and respectful love of Imtiaz in Bebaakee. With finally the show being launched, we can't wait to see how things unfold in this family drama that's high on emotion. The first 8 episodes are already streaming on both the digital platforms.

Next Story : This hilarious banter of jokes between Comicstaan stars is a must-see