Why 'khadi', Gandhi's fabric of freedom, could do with more independence

The Indian fabric popularised by Mahatma Gandhi during the freedom struggle is sold through various channels today, but all that is marketed as khadi is not necessarily authentic. Ahead of Independence Day, experts explain why the true essence of the cloth has diminished and suggest ways to bring it back 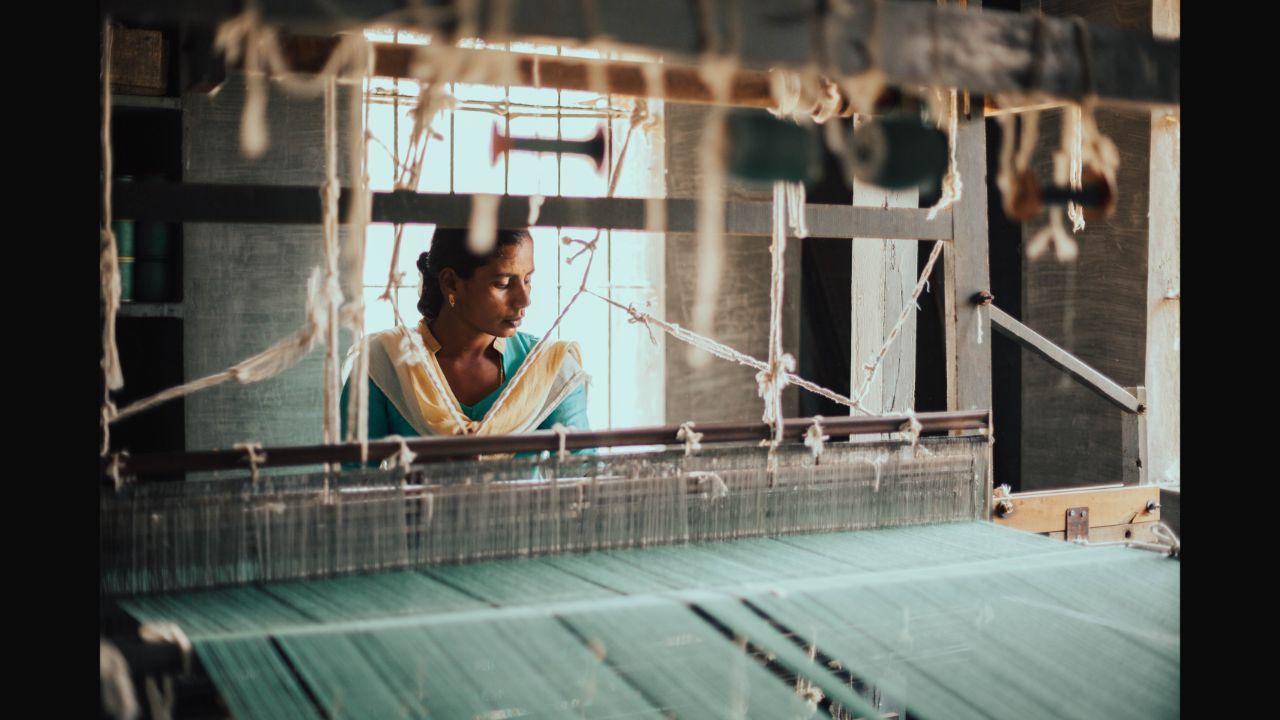 
When one talks about khadi, the Indian fabric made from cotton, it immediately brings to mind Mahatma Gandhi and the freedom struggle. Gandhi coined this term for the handspun cloth, which signified self-reliance, more than 100 years ago in 1918. The Indian flag proposed a few years later by the leader also featured the charkha—the spinning wheel used to make khadi—before the symbol was replaced by the Ashoka Chakra at the time of Independence. It is no surprise then that by law the flag has to be made from khadi.

Even with such a rich past, many khadi loyalists argue that the true essence of the word has been lost over the years. They say the label is being tossed around because of its new-found appeal in the fashion industry but many brands are using this as an opportunity to sell adulterated khadi.

“Since khadi comes under the Khadi and Village Industries Commission, which is a part of the Ministry of Micro, Small and Medium Enterprises (MSME), people require a licence to sell it. The licence is easily obtainable if you have Rs 50,000. However, not all people who get the licence actually sell khadi products,” explains Savita Suri, heritage textile expert and president of the Women’s Indian Chamber of Commerce and Industry (WICCI) Maharashtra Handloom Council. “There are not enough checks and balances done by the Khadi and Village Industries Commission (KVIC) to see what is being sold in the name of khadi.”

This is one of the many issues plaguing the khadi industry today. The term khadi was trademarked by the KVIC in 2014. However, those who love khadi for its true meaning and the freedom it represents aren’t happy with the fact that one has to buy a certificate to use the word, which has existed long before the agency was formed in 1956. The certificate means giving up independence while juggling with the difficulties of bureaucracy, when all one wants to do is create local Indian cloth. It is not only the introduction of the certificate but also the issue of people buying the certificate and selling inauthentic khadi, which has made the situation worse.

The need to make khadi 'independent' again
However, they aren’t giving up just yet. Some have been attempting to create an independent ecosystem, which exudes the original Gandhian purpose and principles of the cloth, and also trying to get it into the market. Sumanas Koulagi is among the few who still uses khadi production as a means to create a self-reliant society. He is a third-generation Gandhian from Karnataka, whose grandfather set up the Janapada Seva Trust (JST) in Melkote to take the idea forward. Khadi is one of their many initiatives and Koulagi has been trying to put theory into practice once he took over the reins two years ago, after completing his PhD in the concept of ‘Development as Swaraj (Self-rule)’.

Koulagi observes, “Khadi was used by Gandhi as a medium to create a non-violent society to achieve Swaraj. But after Independence, the meaning of khadi took a turn and lost its spirit of Swaraj and just became a fabric.” Interestingly, many may think Koulagi’s passion for this subject comes because of his strong Gandhian influences. Surprisingly, it was his love for the environment, which led him to understand the true meaning of the Gandhian teaching, which he had so often heard in his house. Now, it is his quest to strive and achieve the concept of Swaraj in his village, through the making of khadi. “Swaraj and the production of khadi is a sustainable way of making cloth and, in the process, protecting the environment,” he adds.

Koulagi’s Janapada Seva Trust is recognised by the Khadi and Village Industries Commission (KVIC) but it does not avail of the subsidy from the government ministry and that is why it tends to be more expensive. There are three reasons, he says, why they don’t opt for the subsidy. The fact that that creates a dependency on the state is one of the main reasons, as it goes against the concept of Swaraj, which indicates self-reliance. The financial support received from the ministry would further mean the loss of freedom in the decision-making process. Lastly, KVIC represents centralised control, which also goes against what khadi stands for, which is decentralised power. He recommends that the agency should ideally only work as a monitoring agency for quality-checking the khadi that is produced and sold.

“Almost 90-95 per cent of the khadi in the market is fake because instead of being traditionally made with cotton, most of those being sold at the khadi bhandars are actually spun with polyester,” claims Koulagi, based on his observations in Karnataka while researching for his PhD. He is clear about the route he wants to take, and will not compromise on it. Khadi, for him, is beyond the making of cloth. The activity is a means for every person who is a part of the collective to be involved in its decision-making process at every step of the way. It is also the reason why the workers who make the khadi have equal ownership in the process, along with the coordinator and the JST equally shares the profit and loss achieved through the sale of khadi.

Bengaluru-based designer Ravi Kiran, founder of the label Metaphor Racha, shares Koulagi’s sentiment on how khadi is being perceived today. He explains, “Spinning khadi is supposed to be done by villagers after they finish their field work or their day job as a leisurely activity. The meaning of making khadi now has changed. It is a labour-intensive process but today the market is driven by the consumer and not the production, which needs to change.” Kiran has been running his label, which includes creations made out of khadi sourced from Shirahatti among other places, for 12 years now. However, he has refused to buy the ‘khadi’ certification because he believes one should not have to pay to use the word, especially when such a certificate is beyond affordability for many. The refusal means he has had to remove the word from his label entirely. This may have affected sales but he is happy to have stood by the decision.

How awareness, transparency can help meet demand
Among the many Indian cities who purchase his creations online, the Bengaluru designer reveals that Mumbai has a big affinity to khadi as almost 35 per cent of his sales come from the island city. “At all the exhibitions I have been to in the city pre-pandemic, the people who visit me immediately know it is khadi. I am often left surprised and upon asking them, they tell me it is something they recognise as being worn by their parents or grandparents,” he adds. Still, the designer isn’t too happy with the lackadaisical attitude of the khadi bhandars all over the country. Many informed customers tell him that when they ask the representatives at the bhandars for specifics, they aren’t able to explain much. Their reluctance to understand the source of the khadi and take effort in its sale is directly linked to the lack of incentives, Kiran informs, as they aren’t paid much.

The lack of proper knowledge among those selling isn’t the only problem for Kiran. Earlier this year, it was reported that the KVIC had experienced a highest-ever turnover of Rs 95,741.74 crore, which is a 7.71 per cent increase from Rs 88,887 crore in the financial year ended March 2020. In an interview to Financial Express, KVIC chairman Vinai Kumar Saxena said the increase in government orders, online sales and aggressive marketing had supported growth. Kiran and Suri both say that this turnover figure can be misinterpreted by many to be the sales of the khadi fabric itself. “The KVIC does not only include khadi, as there are many other village industries. So, only a part of the turnover actually represents the khadi sales,” Mumbai-based Suri points out. In fact, KVIC reported a drop in sales of khadi fabric to Rs 3,527.71 crore in the financial year ended March 2021 from Rs 4,211.26 crore the previous year, as production units and sales outlets were affected.

Even though many issues still ail the industry, Suri has a suggestion for its growth. She cautions that since making the cloth is labour-intensive, it should not be made in bulk. Instead, entrepreneurs should opt to first secure the number of orders based on the demand before going ahead with production — a method she has practiced to help revive the East Indian lugra in Mumbai. Khadi is handwoven and depends not only on the weaver but also on the carpenter, who makes the charkha, and various other people in the village, who are a part of the supply chain and responsible for the final weave. This will not only help businesses sell all their khadi products but also help the artisans get paid in time and make the khadi successfully.

Also Read: How two Mumbaikars are saving an East Indian sari from obscurity